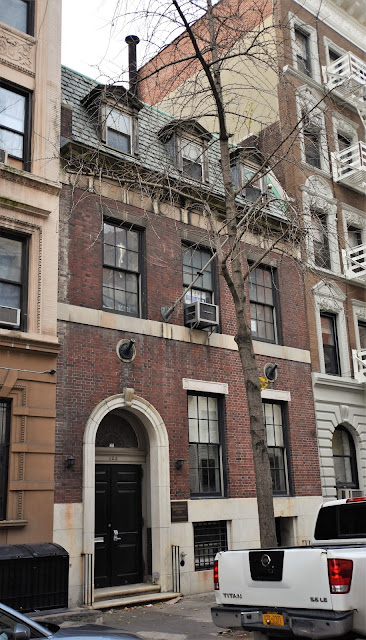 The house at No. 122 East 83rd Street was considered on the "wrong side" of Park Avenue in the 1890s.   Built in 1859, the wooden dwelling now shared the block with the handsome private stables of Fifth Avenue millionaires.

At the time political clubs had gained importance throughout the city.  In 1902 the Republican Club of the 29th Assembly District opened at No. 627 Madison Avenue, at the corner of 59th Street.  Among its original members were the recently elected President Theodore Roosevelt and Mayor of New York Seth Low.  Member Charles Evan Hughes became Governor of New York in 1907 and was appointed United States Supreme Court Associate Justice by President William Taft in 1910.

In 1917 the club moved further uptown to No. 1041 Madison Avenue, between 79th and 80th Streets; prompting a name change to the 15th Assembly District Republican Club.  Its roster continued to impress with members Samuel H. Hofstadter being elected to State Senate and Ruth Baker Pratt elected to Congress in 1928--the first woman from New York so elected.

The following year, in reporting on the club's purchase of "the old frame house" at No. 122 East 83rd Street, The New York Times made reference to the club's wealthy constituents.  On May 29 it wrote that "The Fifteenth Assembly District Republican Club, the 'Silk Stocking District' organization'" had bought the house "where it plans to erect a new building...The house was sold by Judge William F. Moore, in whose family it had been held for seventy years."


The club commissioned architect Eugene J. Lang to design its new clubhouse.  Lang, who began his independent practice in 1908, had by now earned a reputation for producing grand residences in historic styles.  Among them were the neo-Tudor mansion of B. F. Hermann in Tarrytown, New York, built in 1919; and the sprawling Italian villa of Paolino Gerli in Bronxville, New York, completed a year earlier.

Despite the disastrous stock market crash on October 29 that year the project forged ahead.  Lang filed plans in December 1929, estimating the cost at $126,000 (in the neighborhood of $1.75 million today).  Only two months later the cost had risen to $130,000.

The club's annual ball was held at the Commodore Hotel on February 3, 1930; and this year The Times reported that the "proceeds form the ball will be used for the furnishing and decorating" of the clubhouse under construction.  The article noted "As has been the custom for several years, an all-star vaudeville entertainment will precede the dancing."

On May 26, 1930 Ruth Baker Pratt, "holding a brick in one hand and a trowel in the other," laid the cornerstone of the new clubhouse.  The steel box she sealed within the cornerstone contained copies of New York newspapers, a roster of the members, several coins dated 1930, and a program from the February ball.


The interiors were designed by Pauline Sabin.  Born into privilege, the daughter of Paul Morton and Charlotte Goodridge, she owned an interior decorating firm.  But she was best known for her political work.  A year earlier she had resigned from the Republican National Committee to form the Women’s Organization for National Prohibition Reform.

Still called the Fifteenth Assembly District Republican Club when the new building opened, it was unusually accepting of both sexes (possibly through some influence of Ruth Baker Pratt).  The New York Times mentioned the clubhouse "contains a large auditorium, a lounge room for women, a grill room and kitchen."

Political prose at the time was no less acerbic than today.  When Edward C. Carington ran for Borough President in 1931, he compared his Tammany opponent  to a gangster during a reception in the clubhouse on September 27.

"Tammany Hall is New York's Public Enemy No. 1," he said.  "In Chicago that distinction was passed on to Al Capone.  There is no difference between Tammany and Public Enemy No. 1 in that great metropolis in the West."

Less controversial were the several annual events the club sponsored for district children.  On December 28 that year The New York Times reported on the Christmas party for 400 children held the day before.  Alderman Joseph Clark Baldwin dressed as Santa Claus.

"Bewhiskered, and attired in the conventional red suit, Alderman Baldwin stood beside a huge, brilliantly lighted Christmas tree and distributed gifts to every child."  The presents were considered gender-appropriate in 1931.  "Dolls and sets of dishes were given to the girls, while the boys received toy musical instruments, games, footballs, baseballs and basketballs."

Ruth Baker Pratt, as always, was present, as was Assembly man Abbott Low Moffat.  "Preceding the distribution of gifts, a two-hour entertainment was held, consisting of group singing, games, a Punch and Judy show, and performances by an accordion player, a clown and Sooky San, child dancer."

Even more impressive was the annual June outing in Central Park.  More than 5,000 youngsters were treated to an "athletic carnival" in 1932.  Traffic on the Upper East Side was temporarily disrupted as the thousands of children received their name tags at the clubhouse, then marched to the Park; many of them dressed "in the costumes of characters from Alice in Wonderland, in Colonial uniforms and in Indian garb."

The games were made even more special by treats rarely gotten in the Depression years. "Perhaps in view of the heat and the participation of the boys and girls in the roof races provided in the program, about 10,000 bricks of ice cream were eaten...Large quantities of milk, lemonade and cakes also were provided during the day," wrote The Times.

A month later the club members addressed a far more serious issue--Prohibition.  No doubt much to the satisfaction of Pauline Sabin, on July 14, 1932 the club unanimously adopted a resolution in favor of "immediate repeal" of the 18th Amendment.

On August 23, 1968 the club changed its name to the Metropolitan Republican Club.  It was here, on November 29, 1971 that Senator Jacob K. Javits warned his party against Conservatives who, he said, were "pursuing a divide-and-conquer strategy in an effort to take over the Republican party."

Ironically, when the very conservative former U. S. Attorney Rudolph Giuliani announced his candidacy for Mayor in 1989, he did so from the same podium used by Javits.

The Metropolitan Republican Club continued its tradition of attending to the needs of youth when, in 1981, it initiated its After-School Workshop.  About 30 children aged 5 through 12 engaged in activities ranging from crafts, carpentry, cooking, computer lessons, to games like roller disco and dodge ball, as well as tutoring in math or reading.

The picturesque neo-Georgian clubhouse continues to be a vibrant force in New York City Republican politics.  When member Michael R. Bloomberg ran for Mayor in 2005, he made the ballroom his campaign headquarters.  Looking rather like a transplant from Philadelphia's Society Hill, Eugene J. Lang's Metropolitan Republican Club sits serenely amid an architectural hodgepodge on its East 83rd Street block.