On April 25, 1853 an announcement appeared in The New York Times "Arrangements have been made to establish in New-York an Institute, the object of which shall be to afford thorough Musical Instruction, and especially to qualify teachers of music, leaders of choirs, &c."   It would be under the direction of three well-known instructors including Lowell Mason.  The article noted that circulars with further details could be obtained "of Mason Brothers, No. 23 Park-row, opposite the Astor House."

That the pamphlets were available in the publishing firm's reception area was understandable.  Lowell Mason was an eminent psalmist and music teacher (listed among Boston's wealthiest citizens) who had founded the first music school for children in the United States.  His sons, Daniel Gregory and Lowell, Jr., had opened the fledgling Mason Brothers publishing firm earlier that year.

The entire Mason family was, incidentally, involved in music.  Another son, Henry, was a founding partner in Mason & Hamlin, reed organ manufactures; and William Mason was a pianist, composer and music teacher.

Mason Brothers met with overwhelming success, kick started in no small part by its handling all of Lowell Mason's psalm books, musical textbooks, and related musical publications.  But their offerings went far beyond sacred music.  On January 8, 1859 an advertisement in The American Publisher's Circular gave an indication of the wide variety of new publications.  Included were Matthew Garaby: A Narrative of his Adventures Among Friends and Strangers; The Seaboard Slave States: Being an Account of a Journey Through Them with Remarks; A Journey Through Texas, or, A Saddle Trip on the Southwestern Frontier; and The Jubilee, a collection of church music.

In fact, so great was the success of Mason Brothers that on December 29, 1855, just two years after its opening, the firm announced in its Musical Review and Gazette "On or about the first of February, we propose removing to the capacious and elegant store now being erected for us in Duane Street, a few doors west of Broadway."

The proposed move was nearly on target.  On March 11, 1856 a notice appeared in The New York Herald that "Mason Brothers, Publishers, have removed from 23 Park Row to 108 and 110 Duane street."  Composer of hymns William Batchelder Bradbury congratulated the firm in the Musical Review and Gazette later that year saying "We were quite proud of the new and spacious store of our respected publishers at 108 and 110 Duane street, New-York, imagining that there was nothing that could approach it in point of elegance in this country."

The street level retail space in the new Mason Brothers building sat behind a cast iron store front of fluted Corinthian columns and wide double doors.  Unlike many of the commercial buildings rising in the district, the four upper floors were clad in brick rather than stone or iron.   The effect was no less attractive.  Divided into two sections by a brownstone cornice, each was distinguished by two-story arches outlined in projecting brick.  The spandrels that separated the floors were decorated with simple recessed panels.  Below the upper cornice a handsome stepped corbel table, too, was executed in brick.

The financial success of the brothers afforded at least one of them a country estate.  A month after the firm moved into the new building, an advertisement appeared in The New York Herald: "Wanted--Two men for farm and garden work, within an hour's ride of New York.  Must be accustomed to oxen, horses, &c.  Apply on Monday...at the bookstore, 108 and 110 Duane street."

Mason Brothers continued its successful publishing through the years, offering new children's books around Christmas, riveting accounts of travels to the West, and, of course, music books.  On Christmas Eve 1857 the company announced that the New York Almanac and Yearly Record for 1858 was available.  The informative annual included interesting facts, like the Chronological Tables of the Events of 1857, The Weather Tables, the new Metropolitan Police Bill, and a "description of the New Central Park."


In 1869 Oliver Ditson, a publisher who focused on music and musical publications, bought all the assets of Mason Brothers, including the Lowell Mason copyrights.  According to Richard Crawford in his 2001 America's Musical Life, the plates of Mason's works alone were worth over $100,000--nearly $1.8 million in 2017.

The building was purchased by James Henry Heroy, head of the glass importing and mirror manufacturing firm Heroy & Marrenner.  Heroy had established the business in 1852; but became an invalid around the time of the Civil War.  He took as partners brothers David J. and Edward Marrenner, soon becoming the largest plate glass dealers in the country.

The upper floors of the Duane Street building were converted to its "looking-glass factory" where the complex process included cutting glass sheets, applying silver to glass, and framing.  The third floor was the silvering department.  Among the equipment was a drying drum, about three feet high and heated by a gas jet inside.  Its purpose was to dry the papers and linens used in the silvering process.  These items were simply placed over the outside of the hot drum.

On Wednesday night, April 26, 1882 the employees went home for the night.  Whoever extinguished the flame inside the drying drum failed to completely turn off the gas jet.  Overnight the drum filled with gas.  In the morning, when Robert Cookson prepared for the work day, he carried a lit candle to the drum to light the jet.  When the 52-year old man opened drum's door, a violent explosion occurred.  The New York Times reported "he was thrown against a drying-board, a distance of four feet.  The escaping gas ignited and Cookson was badly burned about the hands and face."

It would be the first of a bizarre string of fire-related mishaps in the building for decades--all of which took place on the third floor.

In 1884 Heroy & Marrenner moved to 124-126 Fifth Avenue.  James Heroy maintained possession of the Duane Street property, leasing the ground floor to William Neely & Co.  William Neely had come to America from his native Ireland in 1827.  He opened a shoe store on Catherine Street in 1853.  By now his business had grown into one of the city's foremost wholesale shoe jobbing houses.

James Henry Heroy died on December 26, 1896.  His wife, Amelia, inherited the Duane Street building, which still had just the two tenants.  The combined rents brought in $8,750 per year.

Joseph G. Ellery used the second floor as a stock room, where inks, paper and other supplies were stored.  The presses and offices were located in the third through fifth floors.  On August 17, 1901 fire broke out on the third floor.  Although the blaze was confined to that floor, extensive water damage was incurred.  William Neely & Co. lose $500 in shoes; while The Times reported that "Most of the damage occurred on the second floor, which...contains $35,000 worth of stock."  The building suffered $6,000 in damages.

William Neely & Co. moved to No. 157 Duane Street in 1903.  Amelia Heroy leased the ground floor space to the Merchants Dining Room Company in 1904.  The restaurant would remain until 1915.

In the meantime, a variety of small businesses came and went upstairs.  In 1906 the Schatz Hardware Mfg. Co. was here, making what it deemed "the most complete line of electrical tools in the world."  By "electrical tools" it meant items like linemen's connectors and clamps.


Other tenants were the Wholesale Typewriter Company ("Every typewriter a bargain") on the third floor and fourth floors, and Smith & Hemenway Co., hardware and appliance dealers on the second.  That company marketed its Red Devil Water Motor in 1906--a clever device that attached to any faucet.  An advertisement promised it "will wash bottles, run cooling fans, polish silverware, sharpen cutlery, and many other uses."

The third floor was once again the scene of near-disaster when fire broke out there at around 10:30 on the night of January 11, 1911.  Fire fighters had to break into the heavy factory doors with axes and crowbars. As they worked, the "roar of the flames" could be heard within the Wholesale Typewriter factory.  The pressure of the confined heated air continued to grow until finally, the thick doors gave way.  The rush of oxygen resulted in the firefighters being met with a violent backdraft.

The New York Times described "And then there came a sudden rush of flame.  The open doorway seemed to act as a flue.  Tongues of flame leaped forth from the opening and the firemen were flung back by it, their eyebrows and hair singed, and were sent headlong down the long flight of stairs to the second floor"

The fire was not extinguished until after midnight.  Several firemen were seriously hurt; some with burns, one with a sprained back and another with internal injuries.  Damage to the building, the restaurant, Smith & Hemenway, and Wholesale Typewriter Company topped $100,000.


Amelia Heroy lost her tenants after the fire.  She made significant improvements while making the repairs, including added an elevator, strengthening the floors, and installing electrical wiring and steam heat, and "toilets on the second and third floors."

Following the repairs, the Alcohol Utilities Co. took the second floor.  In 1916 the Champion Coated Paper Company took the first floor and basement levels, while other paper concerns moved in upstairs.  That year Amelia commissioned architect Harry H. Paradies to design new show windows at a cost of $500.

In June 1923 the Heroy estate signed an 84-year lease with the West Broadway and Duane Street Corporation in a staggering $1.5 million deal--almost 20 times that much in today's dollars.  The New York Times revealed "It is the intention of the leasing company to eventually erect a ten-story modern business building on the site."

The building was filled with shoe concerns at the time.  Elias Berlow, makers of military shoes and boots, had been here at least since 1919 when, with World War I ended, it offered the City surplus Army and Navy footwear for its employees.  Berlow pointed out that they were Government inspected; and that boots for which the military paid $9.50 were being offered at $6.50; and shoes costing $8.50 at $5. . In 1921 Elias Berlow had received a $3 million contract with the Russian Government for boots.   Also in the building were the Eureka Shoe factory and the Hamilton Rubber Company

Another serious fire broke out on September 22, 1927.  The burning rubber and leather from the shoe factories filled the City Hall Park area with noxious smoke and odors.  The fire grew to three alarms and more than two dozen fire fighters were overcome by what a newspaper called the "pungent fumes."  Fire Chief John J. Doughterty finally ordered all men out of the building to fight the blaze from the street because of the gases.

Louis A. Pantzer, President of the West Broadway and Duane Street Corporation, did not raze the building as originally intended.  Instead, architect Samuel A. Hertz headed the renovations.  At a time when Manhattan was the epicenter for jazzy Art Deco architecture, Hertz made no significant exterior alterations to the 1855 design.


The building continued to house shoe firms.  Kirsch-Blacher Co. was in the building in the 1930s and '40s.  Then, in 1982 as the Tribeca neighborhood changed its personality to one of upscale residences, restaurants and shops, the upper floors were converted to sprawling apartments, one on the second floor and two each on the third through fifth.

In June 1988 Lush opened in the ground floor space.  With minimalist interiors designed by its owner, Paul Ujlaky, the bar-restaurant specialized in champagne and "rare, single-barrel bourbons." 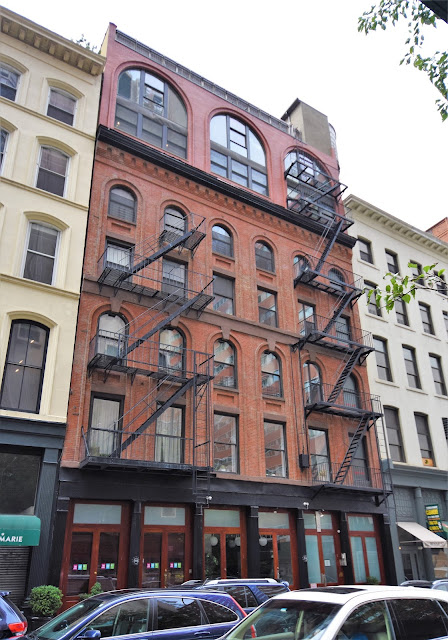 The first major change to the appearance of Nos. 108-110 Duane Street came in the form of two additional floors.  The $1.675 million project, designed by John Furth Peachy Architects, emerged as a neo-Romanesque Revival penthouse that not only sympathetically melded with the original design, but perfectly matched the brick.


photographs by the author
Posted by Tom Miller at 3:25 AM