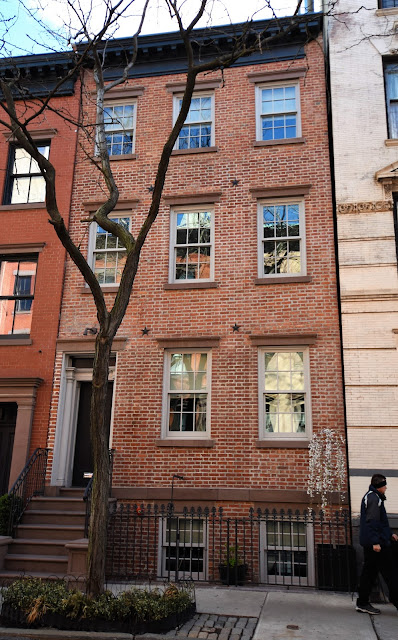 In 1822 New York City faced a terrorizing invader: yellow fever.  The number of deaths climbed to 140 per day, churches were ordered closed, and those who were financially able fled to the healthful, rural air of the village of Greenwich to the north.

J. Hardie wrote in his diary that on August 24, 1822 "our city presented the appearance of a town besieged.  From daybreak till night one line of carts, containing boxes, merchandise, and effects, were seen moving towards 'Greenwich Village' and the upper parts of the city...Temporary stores and offices were erecting, and even on the ensuing day (Sunday) carts were in motion, and the saw and hammer busily at work."

Within days, wrote Hardie, the "custom-house, the post-office, the banks, the insurance offices, and the printers of newspapers located themselves in the village."

The tragedy brought with it financial opportunity. The refugees needed housing, sparking an extraordinary building boom and creating unlikely real estate developers as rows of speculative houses appeared on the winding Greenwich Village streets.  Samuel Z. Smith was a fabric merchant and tailor.  Now, in 1827, he was suddenly he building homes.


That year the Bank of New York sold the plots on the east side of West Fourth Street, from the corner of Bank Street to No. 291 West Fourth, to Smith.   (Interestingly, Bank Street had received its name in 1798 when the Bank of New York bought up the land along the unnamed street during another yellow fever outbreak.  It erected a branch for "emergency use" like this one.)

In the years just before the outbreak of Civil War Samuel Dodge lived in the house.  His was an old American family, the first Dodge arriving in New England in the 17th century.  In contrast to his successful existence, his sister Helen led a tragic life.  Following the death of her first husband, Albert Cocks, she married dry goods merchant Robert S. Morris.

Helen was again widowed when Morris died on February 5, 1860.  It appears she moved in with her brother; for the following year, on May 23,  when 2 year old daughter, Sarah, died the funeral was held in the parlor of Samuel Dodge's house.

Helen's heartbreak was not over by far.   On January 30, 1866 Samuel Dodge died in the house at the age of 84.  His funeral was held there the following Thursday.  Then, just five months later Helen's daughter, Mary Jane Cocks died.  Yet another funeral  was held in the West Fourth Street house.


At the time William H. Baldwin and his family lived a few blocks to the south at No. 63 Barrow Street.  As was the case with Helen Dodge Cocks Morris, the lives of Baldwin and his wife, Mary, were filled with heartbreak.  On May 8, 1864 their three-year old son, Harry, died of scarlet fever and diphtheria.

By the end of the Civil War the family had moved into the former Dodge residence.  It was there, on Tuesday, June 29, 1869 that the Baldwins' youngest daughter, Emily Frances, died.  On July 1, for at least the fourth time in a decade, a funeral was held in the parlor and the door was hung with black crepe.

As the century drew to a close, Henry Thole owned numerous Greenwich Village properties, including No. 291 West Fourth Street.  It was most probably Thole who renovated the house, creating a full third floor and adding sheet metal lintels over the plain stone originals.  While the Federal style iron stoop railings were intact, an owner around the time of Samuel Dodge had replaced the areaway fencing with a Greek Revival design.


Thole still owned No. 291 in 1905 when developer John Paul Hoffman demolished the abutting houses at Nos. 287 and 289 and erected what William S. Pelletreau called, in his A History of Long Island that same year, "an apartment of the better class for ten families."

Hoffman's father, Paul, had been a butcher for many years, but like Samuel Z. Smith, recognized the advantages of speculative building.  Focusing in the Greenwich Village area, he amassed a sizeable amount of property before retiring in 1892 and turning the business over to his son.

Following Henry Thole's death, a massive auction of his real estate holdings was held on June 11, 1907.  Seventeen Village properties were sold.  The purchaser of No. 291 West Fourth Street was John Paul Hoffman.

The house saw several tenants over the next few years, including John Kelly, who signed a lease in December 1914, and G. Boggio the following year.

The cabbie was the target of an ill-planned robbery attempt on August 24 that year.  He picked up 25-year old William Buckworth, a native of Liverpool, England who was a clerk aboard the HMS Fort Victorian anchored off 95th Street.   When McDermitt's taxi broke down on 22nd Street, near Seventh Avenue, Buckworth pulled a gun and ordered "hands up."

The problem with Buckworth's attempted heist was that the pistol was made of glass--a toy that possibly had once held candy.  McDermitt was not fooled and the Englishman spent the night in a cell at the 13th Street station house. 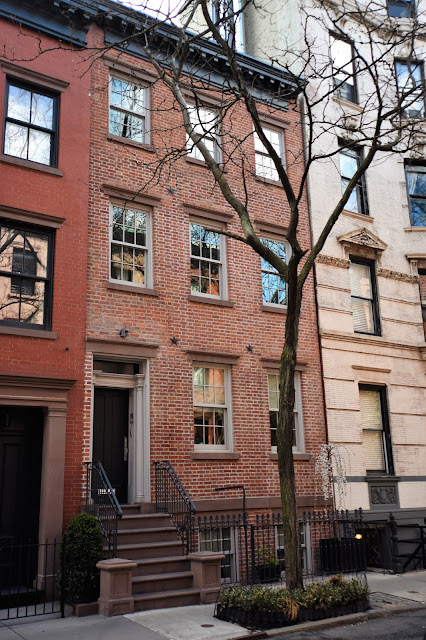 The survival of the quaint structure as a single family home may be due to its narrow width--making a conversion to apartments unwieldy.   It is the last relic of Samuel Smith's 1828 row.  In 2007 developer Scott N. Resnick purchased the house for $3.6 million; selling it within the year for exactly $1 million more.