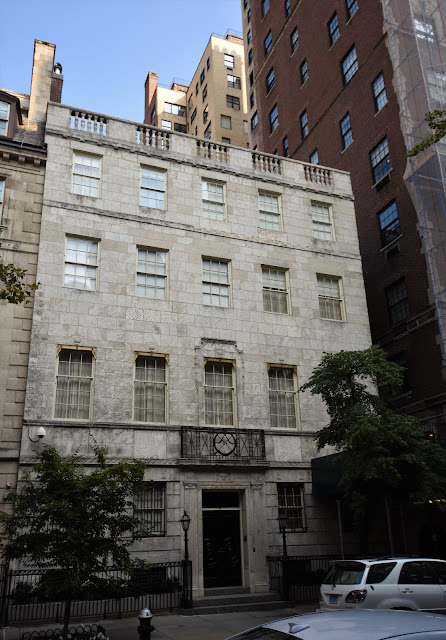 Arthur S. Lehman's father, Mayer, had arrived in Alabama in 1850 to join his brothers, Henry and Emanuel, who had already established a dry good business there.  The German Jewish 20-year old in no way fit the stereotype of the bedraggled immigrant.   With his arrival, the brothers renamed their company Lehman Brothers.

Possibly through Arthur's influence, the firm branched out into cotton factoring.  The Lehmans accepted bales of cotton in exchange for merchandise.  Eventually, cotton trading would be their main industry.  Mayer became a true Southerner, supporting the Confederate cause and even owning seven slaves according to the 1860 U.S. Census.

Two years after the end of war, he and his brother Emanuel (Henry died of yellow fever in 1855) moved the firm to New York City.   Mayer was a founder and director of the New York Cotton Exchange.

Mayer and his wife, the former Babetta Newgrass, had eight children.  Arthur was born on June 1, 1873.  By the time of his father's death in 1897 Lehman Brothers had become one of the most important investment banking firms in the country.   Unlike his brothers Arthur joined the firm, eventually becoming a senior member.

He married the 19-year old Adele Lewisohn, daughter of millionaire banker and mining magnate Adolph Lewisohn, in 1901.  Adele was cultured and educated, having attended the Anne Brown School and Barnard College.  Although characterized by The New York Times later as "a shy, reserved woman," she was progressive for an Edwardian socialite.  When her translation of Rudolph Herzog's The Story of Helga from German to English was published in 1913, she used her maiden name.  And unlike other moneyed wives, content with polite teas and drawing room visits, she played championship tennis and was an accomplished golfer.

Arthur and Adele had three daughters and lived in the Fifth Avenue mansion district at No. 31 West 56th Street.  But by the 1920s the neighborhood had become sorely commercialized.

In 1925 the Presbyterian Hospital which engulfed the block from Madison to Park Avenue, between 70th and 71st Street, prepared to relocate far uptown.  The valuable Lenox Hill property was put on the market.

The Hospital left the block in 1928.  Developer Alfred Rheinstein had purchased several of the lots.  He built homes on seven, and sold one plot to Arthur S. Lewisohn.  Like the innovate Sutton Place arrangement conceived a few years earlier, the houses would share a common rear garden.

The Lewisohns commissioned Aymar Embury II to design their new mansion and construction began that same year.  Completed in 1929, the 43-foot wide stone-faced residence was at once severe and elegant.  Five stories tall, its neo-French Classic facade was sparsely decorated with delicate urns and similar neo-Classical elements.  The center opening at the second floor, above a graceful iron pseudo-balcony, was ornamented with exquisite, understated carved draping.  The rooftop parapet was broken by balustrades above each opening.

On November 19, 1934, for instance, she hosted an afternoon reception for the workers in a fund raising drive for the Federation.  The women heard Dr. Sigismund S. Goldwater, Commissioner of Hospitals, speak.  The "principal guest" was French stage star and singer Lucienne Boyer.

The couple maintained a summer estate, Ridgeleigh, in Purchase, New York.  Their daughter Frances and her husband, wealthy broker John Loeb, also had a home there.

In April 1934 Frances stayed in her parents' 70th Street house for a few days while they were in California.  On April 2 she came home from a social engagement.  The Great Depression had little effect on the Loeb or Lehman families--a fact evidenced in the jewelry she removed and placed on the dressing table that night--"several diamond bracelets, a pearl necklace and a diamond bow-knot brooch."

The next morning a maid noticed the jewelry and placed it in a drawer in the dressing table.  The following evening Frances was nearly finished dressing for the theater when she opened the drawer.  The jewelry was gone.

Police inspected the bedroom windows, which showed no indication of having been forced and there were no marks on the bedroom door which might show it had been jimmied.  The five servants were interrogated, but, according to The New York Times, "could not provide any clues."

As was common, the Lehmans and their millionaire neighbors had hired outside security to patrol the block.  Peter Baronossky was making his rounds a week later, on April 11, jiggling doorknobs to make sure they were locked.  When he tried the Lehman door, it opened.

He entered the vestibule to see if the inner door was locked and noticed a carefully-wrapped tissue paper package lying in a corner.  When he nudged it with the toe of his shoe, a diamond bracelet fell out.  The Lehmans were still out of town; but he woke the servants and notified the police.

All of Frances Loeb's missing jewelry was in the package.  Once again the servants were questioned.  Although it would seem that the theft was an inside job and a nervous servant had placed the package there, the culprit was never found.

Arthur Lehman developed a blood clot in his leg in May 1936.  It broke loose and traveled to his lungs, resulting in a fatal pulmonary embolism.  He died suddenly on May 16 in the 70th Street mansion at the age of 63.  His funeral was held at Temple Emanu-El the following day.  Lehman was at the time a trustee of the New School for Social Research, the Museum of the City of New York, the City Housing Corpration, and of the Andrew Feedman Home, a retirement home for wealthy New Yorkers who had lost their fortunes.

Adele continued with her intense charitable and social work.  On March 16, 1938 she entertained committee members of the Joint Home-Finding Committee for Jewish Foster Children.  In addressing the group, she said "The magnitude of the problem can perhaps best be understood if I mention that 2,900 children are living in foster homes today through the work of our agencies, but that almost twice as many applications of potential foster mothers were studied to find the happiest combinations of mother and children."

In the 1940s she was active in the League of Women Voters, serving as its vice president in 1945; she was elected to the board of the Philharmonic-Symphony Society in 1947, and founded the Arthur Lehman Counseling Service in 1954.  In 1957 she donated the funds to build Adele Lehman Hall at Barnard College.  She died in the Ridgeleigh estate of a cerebral hemorrhage on August 11, 1965 at the age of 83. 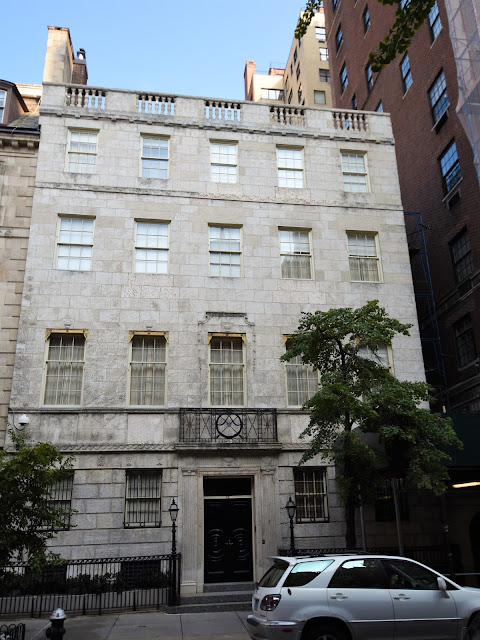 At some point the facade was sandblasted in an ill-advised effort to clean it.  The result was that the stone was severely pitted, sadly diminishing the original, refined appearance.  Otherwise, the Lehman mansion, still a private home, appears unchanged--a 2009 roof addition is invisible from the street.