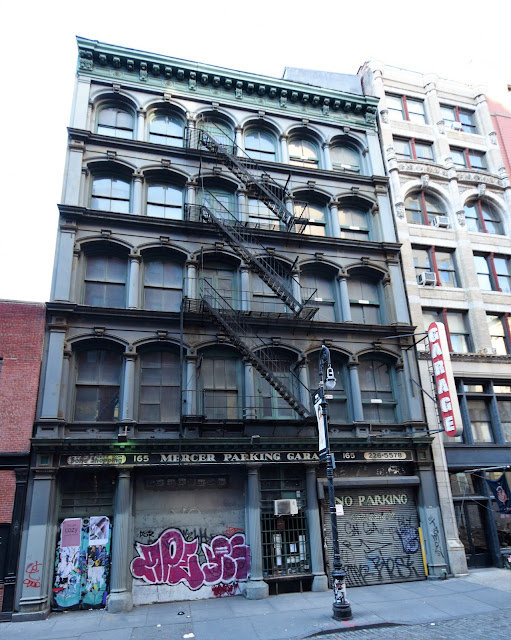 In the 1870s developer James Kent was keeping Henry Ferbach, busy.  In 1870, for instance, the architect simultaneously designed cast iron structures for Kent at Nos. 137-139 Mercer Street and and at Nos. 136-138 Greene Street a block away.  In 1872 the pair collaborated on another five-story cast iron fronted building on Union Square.

The Mercer Street site had been well-known to New Yorkers for decades.  In the 1840s John S. Roulstone operated his riding school here.  With true Victorian decorum, Roulstone maintained strict separation of male and female instruction.

An advertisement in The Anglo American on February 7, 1846 laid out the hours--ladies were taught between 9 a.m. and 2 p.m.; men from 6 p.m. to 8 p.m.  "No Gentlemen admitted during the hours appropriated to Ladies."  The ad noted that gentlemen who boarded their horses here "will have the privilege of riding them in the school gratis."

The school was gone by 1862 when it was operated as a boarding stables, run by Horace Jones.  Following his death it became the Butler's Livery Stables.  The high-end tone of the operation was evidenced in an 1865 advertisement in The New York Herald.  A trotter being boarded here was offered for sale, described as "a splendid brown Stallion, sired by Flying Cloud, warranted to trot in 2:45 in harness.  Pedigree and particulars at the office."

An advertisement in September 1868 offered "good stalls for boarding horses at Butler's Livery Stables, the most central location in the city."

By now the district just below Houston Street had caught the attention of developers like James Kent.  Old houses and stores were being rapidly demolished and replaced by modern iron-fronted commercial structures.  In September 1870 Henry Ferbach filed plans for "one five-story and basement first-class iron store" on the site of Butler's Livery Stables.

The handsome structure was completed in 1871.  The facade of the fifty-foot wide building had much in common with the dozens of others appearing throughout the neighborhood.  Fluted Corinthian columns dignified the store front; while projecting cornices above separated each of the nearly-identical floors.  An Italianate cast iron modillioned cornice crowned the design.

By the time the Department of Buildings checked the safety features of the building in 1873, it was owned by E. W. Rachan.  Described by the satisfied inspectors as a "factory," they noted its "fire escape and ladder to roof."  Rachan was highly active in the neighborhood, owning and operating several properties.

The Mercer and Greene Street area was quickly becoming the center of Manhattan's fur trade and by 1881 J. & A. Boskowitz had moved into the building from No. 38 Mercer Street, where they had operated for years.   The following year it was joined by another hide and fur company, Joseph Ullman & Co.  At the same time Mercer Street was renumbered and the building became Nos. 165-167.

Joseph Ullman had immigrated from France to New Orleans in 1851.  He traveled north to Minnesota where fur trapping was widespread, opening a hide business in St. Paul in 1854.  In 1866 he opened a Chicago office, and two years later one in New York.  By the time the firm moved into the Mercer Street building Joseph was living in Leipzig, running the branch there, and his son Samuel was heading the New York business.

Both Joseph Ullman & Co. and J. & A. Boskowitz were making fortunes in buffalo hides.  Between 1876 and 1884 the latter company paid $923,070 for buffalo skins ($24 million in today's dollars); and in 1882 alone Joseph Ullman & Co. spent $216,250.  The pelts of the magnificent animals were being made, mostly, into the heavy buffalo robes that kept passengers in carriages and coaches warm.

The demand caused unchecked massacre of the buffalo population, so that by 1885 the business had dwindled to next to nothing because the animal had been driven to near extinction.  In 1887 Joseph Ullman & Co. reported its buffalo hide figures for the past seven years.

In 1881 the firm purchased 14,000 hides and 12,000 robes; the following year that number rose to between 35,000 and 40,000 hides, although the number of robes dropped to 10,000.  The numbers quickly dropped as, according to Joseph Ullman himself, "thousands upon thousands of buffaloes were killed for the sake of the hide alone, while the carcasses were left to rot on the open plain."

Buffalo hunters were paid $3 each for a cow's hide, $2.50 for a bull's, $1.50 for a yearling and 75 cents for a calf's hide.  In 1885 there were essentially no buffalo left to slaughter.  Joseph Ullman reported "In 1885 the collection of hides amounted to little or nothing."

The 1887 Annual Report of the Smithsonian Institution noted that J. & A. Boskowitz and Joseph Ullman & Co. were the two largest dealers in buffalo hides in the U.S.  Both firms had cooperated in the Institution's study on the near extinction of the animals.

By now, according to the 1886 History of Chicago, Joseph Ullman & Co. was "probably the largest fur house in America, handling over three million dollars' worth of furs annually."  Although J. & A. Boskowitz was soon gone, Ullman & Co. would remain at 165-167 Mercer Street at least until 1919.

In February 1895 P. Schulang leased a loft in the building.  Unlike Boskowitz or Ullman, the firm was a "manufacturing furrier."  Rather than sell pelts and hides, it fashioned them into coats, jackets and other apparel.

Early in 1905 the fur district was plagued by bold burglars who struck in mid-day.  Among the nearly two dozen firms victimized was Joseph Ullman & Co.  On June 13 the New-York Tribune explained "The method which has been used with so much success, is for two men to enter a store at noon, when most of the employes are at luncheon.  One talks to the clerk, while the other, who carries a large satchel, fills it with valuable skins."

The scheme was finally foiled when, after making off with $12,000 in furs within six months, the crooks attempted to rob the wholesale fur operation of Edgar Lehman.  They were caught in the act when one "was too greedy and stuffed the bag so full of furs that he was unable to close it."  The men fled, chased by the employees.  The Tribune reported "one of the miscreants was caught.  The other escaped, and the police are trying to find him."

Although authorities were certain the two were responsible for all the thefts, Joseph Ullman & Co. and the other firms were concerned.  "The victims are afraid that it will be impossible to convict the present prisoner on more than one charge, but are hoping for the capture of the confederate."

By now apparel firms other than furriers were moving into the building.  One was the Diamond Waist Company, manufacturers of "waists," the most popular item of feminine apparel at the time.  It was owned and operated by the Triangle Waist Company, the headquarters of which were in the Asch Building near Washington Square.

A fire broke out in the Diamond Waist Company's loft on April 12, 1907.   It was quickly extinguished, but, in retrospect, was a disturbing foreshadowing of the tragic Triangle Shirt Waist fire five years later.

The same year of the Diamond Waist fire, another tenant, H. Damsky, maker of hosiery, purchased the building.  The manufacturer was already operating its store from the ground floor and basement.  In 1911 the firm pleaded guilty to two counts of violating the child labor laws and was fined $40.

Following World War I the garment and furrier districts moved uptown.  On May 21, 1925 The New York Times reported that the Witkin Garage Realty Corporation had purchased the Mercer Street building, and had commissioned architect Murray Klein "for the purpose of making extensive alterations for its conversion into an entirely fireproof garage."

The Mercer-Houston Garage would be the haunt of crime and gangsters in the Depression and Prohibition years.  On July 18, 1935 police officer Henry J. Mensing arrested two men with a truckload of merchandise which they stole from the garage.

But most shocking was the bootleg ring that was busted here in 1939.  Gangster Joseph "Black Lefty" Lapadura ran the liquor syndicate from here.  The FBI set up surveillance of the building from across the street.  The garage was raided on October 16 and Lapadura and nine other men were arrested.  United States Attorney John T. Cahill called it the "largest bootleg ring since prohibition" and suggested that more than 100 more arrested might be made.  The ring operated half a dozen stills in New York and New Jersey and distributed 2,000 gallons of grain alcohol daily.


The New York Times reported "The garage raided yesterday was an old-fashioned, five-story building, close to East Houston Street.  On the ground and upper floors private automobiles and trucks were stored, but the basement was given over entirely to the activities of the ring."

The Feds seized two trucks and several automobiles which had been used for the delivery of alcohol.  "The trucks were large, ordinary-looking vehicles, ostensibly used by a grocery house," said The Times.  "The burlap sacks and paper cartons they contained, however, actually were camouflage for the five-gallon tins used invariably in the illicit alcohol trade." 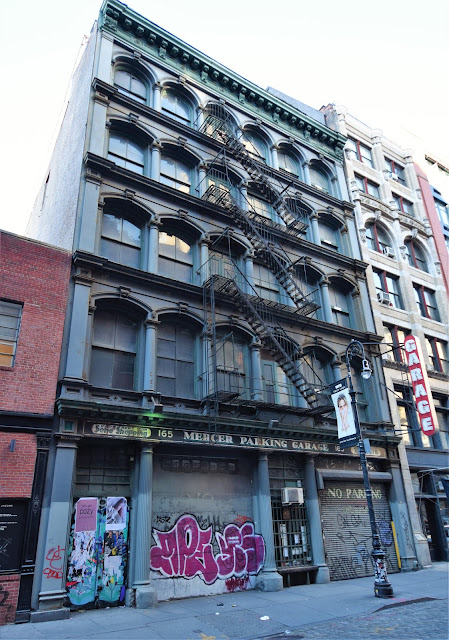 Business in the Mercer Street garage was less dramatic throughout the rest of the century and into the 21st as the Soho neighborhood was reinvented as a center of art and boutiques.  In September 2016 the Landmarks Preservation Commission approved changes which would convert the garage into offices with retail space at ground level.  A penthouse level, set back 10 feet from the cornice, will be invisible from the street.  Somewhat sadly, the nostalgic neon blade sign GARAGE will be removed in the renovations.