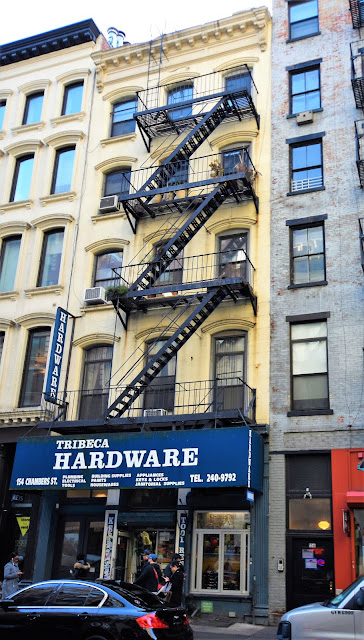 The family of Benjamin Stagg, Jr., principal in Benjamin Stagg & Co., lived at No. 154 Chambers Street, between West Broadway and Greenwich Street in the 1830s.  As well-to-do families moved further north, the residence was being operated as a high-end boarding house by 1852.  That year an advertisement appeared in The New York Herald offering "Board, at 154 Chambers Street--A Pleasant well furnished room, suitable for two gentlemen.  Also, a fine parlor on second floor, which, if parties desire, will be rented unfurnished.  The house is well kept, has fine pantries, baths, &c."

The boarding house would not survived much longer.  By 1860 Thomas Suffern had demolished it and replaced it with a five story Italianate style commercial building.  As with most such structures appearing throughout the area, it featured a cast iron storefront with fluted Corinthian columns.  The  elliptical arched openings of the upper floors were highlighted by carved eyebrows; and their stone sills sat on delicate brackets.  The building was crowned by a modillioned Italianate cornice with two leafy side brackets.

E. H. Hanford & Co. was among the first tenants in the new building, doing business here in 1860.  Dealers and manufacturers of home furnishings, it had provided "looking-glasses" to Sing Sing Prison in 1858.  The $18 price tag would be equal to about $535 today.

In 1865 the ground floor was vacant.  An advertisement in The New York Herald announced "To let--Store--A large store, with splendid, well lighted Office, in one of the best localities in Chambers street."

The transformation of the neighborhood from residential to commercial was fueled by the construction of East River Railroad Company's freight terminal at the end of the Civil War.   The area around No. 154 drew butter-and-egg, produce, and similar businesses.

In the mid 1870s Belt & Cilley, butter and cheese merchants, operated here; joined by John S. Hawley & Co., candy makers, by 1879.  John Savage Hawley had already had a diverse career.  Born in Charlton, New York in 1838, he was educated in public schools.  In 1859 he joined his brother's "fancy-goods" business in Texas.  A Yankee with pro-Northern sympathies, he was forced to escape through Mexico during the Civil War.

He reappeared as a clerk in a Virginia City, Nevada silver mining company, made a fortune in the lumber business (and later losing it), and invented a cob-lined smoking pipe while in the West.  In 1870 he moved to New York City, joining the confectionery firm of Wallace & Company.  Candy making did not squelch his inventive propensities and in 1874 he invented the "elastic force cup" for clearing plumbing--what today we call the plunger.


Most likely using the profits from his invention he opened his own confectionery factory and store in 1875.  Hawley's partner was Herman W. Hoops and eventually the firm name would become Hawley & Hoops, famous for its patented "chocolate candy segars," its "old fashioned licorice" and a score of other sweet delights like "Union Cream bon-bons" and "Flat Wintergreen Creams."  The firm would remain in the building until the early 1880s.

Quite unlike the chocolate cigars offered by Hawley & Hoops, George K. Davis sold "liquors" in the ground floor space in 1886.  Within the decade, at least by 1886, another butter and egg firm, Gude Brothers, was doing business in the building.

Dealing in dairy products required cold storage--something not so easily found in the city in the summer of 1899.  So when Henry N. Peters hooked a massive fish in the Long Island Sound, Gude Brothers offered its coolers to show off the prize.

On August 22 The New York Times reported "The largest striped bass reported as having been caught this season along the Sound is now on exhibition at the cold-storage rooms of Gude Brothers...The fish weighed thirty-three pounds when caught, and in its present state tips the beam at thirty-one and one-half pounds."

It had taken Peters about 20 minutes to land the finny beast.  The newspaper added "The fish will be stuffed and mounted this week."

A tenant unusual for the district was R. R. Marie Roofing Company, in the building by 1903.  The burgeoning interest in Mediterranean Revival and Spanish Revival architecture prompted the company to issue a booklet that year informing contractors on "in detail the best way of laying [tile] roofs."

While Hawley & Hoops had been making candy here, another confectioner, Alexander M. Powell had operated from Nos. 150-152 next door.  In August 1904 he leased the entire building at No. 154 from the Thomas Suffern estate.   Once again the aromas of chocolate and peppermint wafted from the building.  Alexander M. Powell remained until 1909 when its new building at the corner of Canal and Sullivan Streets was completed.

The J. M. Sherwood Co. leased the upper floors in 1914.  Dealers and manufacturers in home goods and appliances, it offered the latest in domestic ranges to American housewives.  In 1916 it patented what, like John Hawley's plunger, would become a household must-have.

On October 8 the New-York Tribune reported on the invention.  "Dishes may not only be rinsed, but dried, in the Sherwood Dish Drainer.  This is quite according to the most approved methods of dish drying, for the dish towel is no longer an important member of society.  A special rack is provided for the plates, with a basket for the silver, and there is still space for the rest of the dishes."


The wire rack and galvanized pan retailed for 75 cents.  It was hailed throughout the country and marketed in Europe.  With only minor changes to J. M. Sherwood's design, the dish drainer is still sold today.

The Suffern estate sold No. 154 Chamber Street after about six decades of ownership in December 1919.  The tradition of candy still held on in the form of a candy store at street level.  On September 17 the following year, the owner placed an advertisement seeking "Saleslady--Experienced, for confectionery store; good pay; no Sunday."

As mid-century approached, the Superior Typewriter Company occupied space in the building.  Police were baffled in February 1948 by a string of burglaries.  The crooks specialized in safe cracking; but were unusual in their methods.  Police told reporters "the gang seldom used weapons or burglar tools, performing their safe-opening with implements found at the scenes of the robberies."

On the night of February 16 the burglars forced open the skylight at No. 154 Chambers and dropped into the Superior Typewriter offices.  They snatched $50 in cash, several typewriters and eight bottles of rye whisky.

They then crossed the roof to Nos. 150-152 and looted eight offices there.  While there the steely-nerved crooks stopped to have dinner.  "When they were through the floors were covered with tuna fish cans, whisky bottles and safes--all empty," reported The New York Times the following day.

A week later police had the gang in custody--their identities shocking.  The criminals ranged in age from 14 to 18 years old.  The Times was most fascinated with the youngest, running the headline "14-Year-Old 'Giant' Held in Burglaries."

Two of the boys had already been held in a state reform school.  The over-sized 14-year old, whose identity could not be released because of his age, was described as "6 feet tall and weighting between 180 and 190 pounds."  Detectives said he "did all the heavy work."  The boys had been busy.  They were accused of "at least thirteen burglaries and safe-cracking jobs" during the last few months.

Like many loft buildings in the area, as Tribeca once again changed in the last quarter of the 20th century, No. 154 was converted to residential space above the ground floor.  In 2015 a subsequent renovation resulted in one apartment each on the three uppermost floors, and office space on the second. 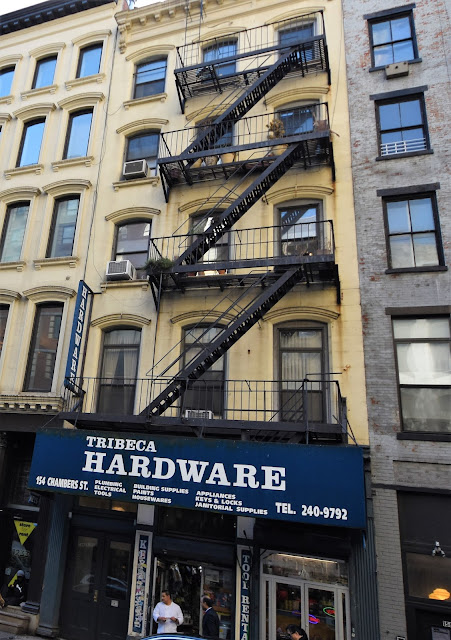 The cast iron storefront has been abused over the years and its Corinthian capitals have been lost.  And upstairs an ill-advised coat of cream-colored paint covers the stone facade.  Yet with only a little imagination the passerby can imagine bowler-wearing businessmen coming and going through its doors.