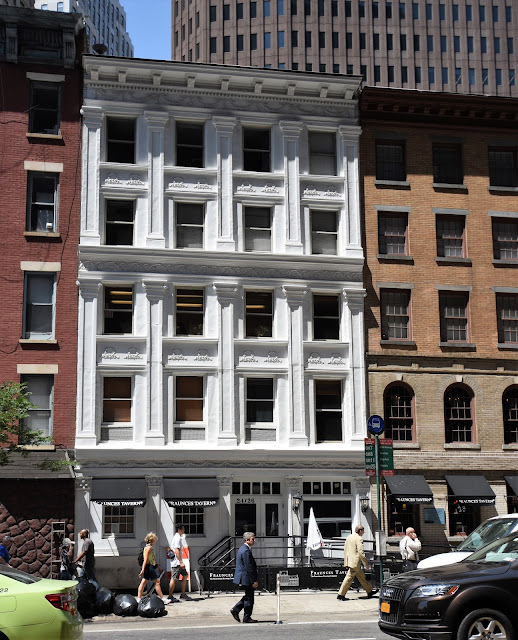 By the first years of the 18th century the Fighting Cocks tavern operated at No. 24 Water Street--the street so named because the river bank was so close the road flooded at high tide.  Seamen and shopkeepers would drink ale here for decades before the building burned in 1776.

A commercial building replaced the tavern, and in 1844 Thomas Eaton operated his business here.  Patrick Austin helped himself to $50 in bills that summer, landing him in court.  The jury found him guilty on September 17 and he was sentenced to two years in the State Prison.

By 1862 Stephen D. Herrick and John Wakeman ran their produce business from No. 28 Water Street.  Their business was apparently successful enough that in 1862 Herrick began construction of a modern, cast iron-fronted building two doors away at No. 24.  Completed the following year, it had nothing in common with its brick-faced neighbors, most constructed in the 1820s and '30s.  It wore its refined neo-Classical elements--swags and wreaths, and paneled pilasters, for instance--like a tuxedo among the work clothes of longshoremen.

It appears Herrick constructed the building for investment purposes.  As late as 1870 Herrick & Wakeman was still listed at No. 28 Water Street.  It would house firms related to the shipping or grocer industry for decades; with one possible exception of The New-York Hollowware Company which called No. 24 home in the 1890s.

That firm narrowly skirted financial disaster when Paul Brigham was arrested on January 10, 1896.  The Indianapolis Journal reported that Brigham, "alias George Watson, alias Charles J. Bartlett, alias David Coleman, alias 'the General,'" was "one of the oldest and most notorious swindlers in the United States."

Brigham's modus operandi was to approach a successful firm and express interest in investing $50,000.  The con man relied on his victims' greed--his offer would equal about $1.46 million today--to blind them to his intentions.  And because, as the Journal pointed out, "he was well dressed, had plenty of money, and presented excellent letters of recommendation," he seemed to be on the level.  But his slick talking eventually ended with his making off with money, rather than giving up any of his own.

He simultaneously worked his scheme late in 1895 on four New York City companies--the carpet and rug firm of White & Spate, jewelers Theodore Kohn & Son, the legal firm of Hadley, Lauterbach & Johnson, and the New-York Hollowware Company.  He had already collected "considerable sums" from some of his victims when one of the principals of White & Spate became suspicious and caused prompted the investigation which brought Brigham down.

In 1913 the building was owned by James O'Donnell.  He leased it that year to The Aspell Co., wholesale grocers and ship chandlers.  Headed by J. Whalen Aspell and Louis E. Field, it would remain for several years.

Five years earlier a rather remarkable restoration of the building behind No. 24 had taken place.  American interest in historic sites was almost entirely limited to battlefields or, in some cases, the homes of important military or political figures--like Mount Vernon.   But in 1894 Fraunces Tavern, caught the attention of the Daughters of the American Revolution.

George Washington had made his farewell address to his troops in the building, and it was that connection that sparked interest.  By the turn of the century the Sons of the Revolution had joined the effort to restore and preserve the property, which was dedicated with great fanfare on December 4, 1907.

But the Sons of the Revolution were not done yet.  Not only did the group announce that it intended "to undertake the preservation of the place" in 1920, it had already begun accumulating surrounding property to prevent incongruous development.   The Sons of the Revolution had already purchased the building at Broad and Pearl Streets.  On February 14 the New-York Tribune reported that the group intended "to acquire additional property adjacent to Fraunces' Tavern" and "have made a contract for the acquisition of 24 Water Street for $45,000."

The new ownership brought no immediate effect.  The building continued to be leased to various waterfront companies.  In 1922 the Irish-American Line moved its new passenger offices in; and in 1926 ship chandlers James W. Cunningham & Co. was here.

Joseph Smith, his brother Vincent, and Maxim Montgomery ran the Art Studio Warehouse, along with the Treat 'Em Right Publishing Company nearby at No. 2 Stone Street.  Their operation drew the attention of the Society for the Prevention of Vice and the New York Police Department in the spring of 1934.

The three were arrested and "two tons of alleged obscene literature were seized with 400 copper plates" in a raid on the two locations on April 9.  The New York Times reported "The confiscated matter consisted of 4,600 books selling form $5 to $25" and that the trio was charged with vending obscene literature.  Two days later the men were held on $500 bail awaiting their court date.

Mostly because of the foresight of the Sons of the Revolution, the block defined by Water Street, Pearl Street, Broad Street and Coenties Slip escaped further development.  And when the Uris Corporation began illegal demolition of five properties in 1974 for a parking lot, the Sons of the Revolution partnered with the New York Landmarks Conservancy to take the first steps in the creation of the full-block Fraunces Tavern Historic District. 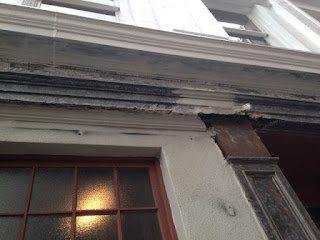 No. 24 Water Street is now the Porterhouse Restaurant, part of the Fraunces Tavern Museum complex.  In 2015 the Sons of the Revolution undertook a restoration of the deteriorating cast iron facade.  Rather than cut corners by reproducing lost or damaged elements in fiberglass, contractor JEPOL Construction commissioned Catskills Castings to create molds from surviving details and make new cast iron elements. 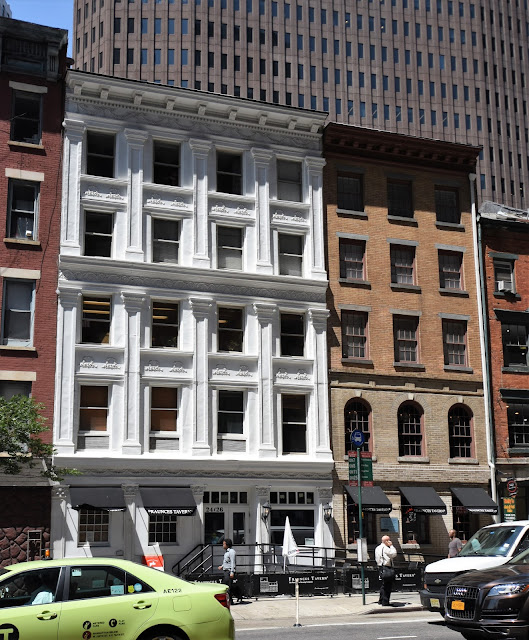 The restored structure, with its gleaming coat of white paint, is once again just a little haughtier that its red and brown brick neighbors.