In the years following the end of World War I the rowhouses of the Audubon Park neighborhood were rapidly being demolished and replaced by modern apartment buildings.  But Charles Siegel Levy and Nathan Berler had a different idea.

Levy, an attorney, and Berler, a principal in the apparel manufacturing firm of Baren, Lehman & Berler, were convinced there was a market for two-family homes in the area.  At the point where Riverside Drive and West 158th Street came together was a sharp triangular plot of land.  The two men created Bertley Holding Corporation (a not-so-subtle composite of their names) and in June 1920 purchased the wedge of real estate.

They commissioned architects Moore & Landsiedel to design an upscale home intended to be the model for a series of residences that never came to pass.  Fred W. Moore and Frank L. Landsiedel produced two handsome homes which successfully pretended to be a single Mediterranean villa.  Constructed at a cost of $70,000 (just under $1 million today) they boasted "completed electrical equipment" and garages below the homes, accessed on West 158th Street. 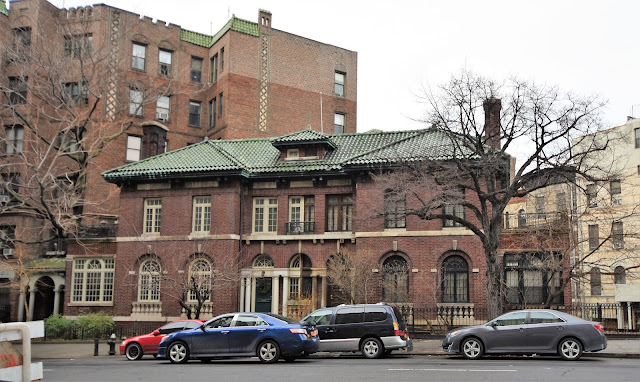 The houses each contained 11 rooms, including the large solaria at either end.  The Mediterranean Revival style structure, with its red brick and deep green tiled roof, was splashed with occasional Arts & Crafts touches, like the stained glass transoms in the shallow, projecting bay at the rear of No. 811.


Perhaps the reason that Bertley Holding Corporation's grand plans for similar homes never went forward was a break-up in the partnership.  The New York Times commented on the newly-completed houses in February 1922.  Charles S. Levy's name was not mentioned.  Instead, the article gave the entire credit to Nathan Berler; going so far as to say "It proved so successful that Mr. Berler now occupies the south half of the house himself and found no difficulty in selling the north half."

In fact, Berler had not sold No. 811.  His next door neighbor was his former partner, Charles S. Levy and his family.


Nathan and Sadie Berler were married on November 2, 1913 and moved into No. 809 with their three year old daughter, Lucille Marsha.  On the evening of New Year's Day, 1922 they hosted what The American Hebrew deemed "the first house warming in their newly completed residence."

Their family increased by one on August 29 that year when Marten Arnold was born.  At least one servant lived with the Berlers.

Two years after moving into No. 809 Nathan Berler (now head of the Enesbe Realty Corporation) started construction of the abutting apartment building at No. 807.  He instructed the architect, George F. Pelham, to design it to be architecturally harmonious with the two houses.

In 1930 the Berler family moved into No. 807, leasing No. 809 to Louis Robison.  In reporting on the deal, The New York Times mentioned "The house, which was built only seven years ago, contains at $25,000 organ and a garage.  It receives heat and hot water from 807 Riverside Drive, the adjoining apartment house, also owned by Mr. Berler."

Robison was a principal in the cotton and rayon yarn trading company L. Robison Co., with partner Lawrence Lindner.  He served as treasurer of the Federation of American Zionists.   Robison and his wife were no doubt thrilled when daughter Hannah won a State scholarship to Cornell University in 1931.  The result of a competitive examination, the scholarship reduced tuition to $100 per year.

In the meantime the Levy family was still in No. 811.  The family had three sons, Walter, Howard and Lawrence.  As Lawrence and Howard went on to Harvard, Walter was still studying at the Horace Mann School in 1927.  He was among the group of 100 boys to traveled to Denmark that year, a trip arranged by the Rotary Club and the American Club of Copenhagen.

But the Levy family would also endure tragedy in 1927.  On February 11 Charles was driving along East 152nd Street at the same time that 4-year old Jeremiah Mulcahy was playing in front of his home.  The automobile struck the boy, who died in the ambulance on the way to the hospital.  The following day The Times reported "Levy was also directed to appear at the Bronx Homicide Court this morning."

The Levy family remained in No. 811 at least through 1937.  In 1942 the house was sold to Dr. Luigi Capobianco.  It was assessed at the time at $22,000.  Capobianco moved his family into the house, but immediately rented rooms as well.

Although the Capobianco family was still in the house as late as 1952, it was converted to apartments, one per floor, around mid-century.

No. 809, meanwhile, had seen a series of tenants.  Following the Robison family came Louis Berkowitz in 1934, Aurelia Smart in 1939, and when her five-year lease expired the house was purchased by Adele R. Harlowe.  Adele leased rooms, apparently, and in 1947 one of her tenants was biologist Jewel Plummer Cobb.  Recognized today as an African American pioneer in medicine, her research on cancer cells led to major advances in chemotherapy.


When No. 809 was listed in 2010, it's 1921 interiors were amazingly intact.  The new owners initiated a restoration that included replacement windows, most of which were faithful copies of the originals.  The sympathetic facelift accentuated the fact--for perhaps the first time in nearly a century--that the villa is actually two homes.


photographs by the author
Posted by Tom Miller at 2:17 AM