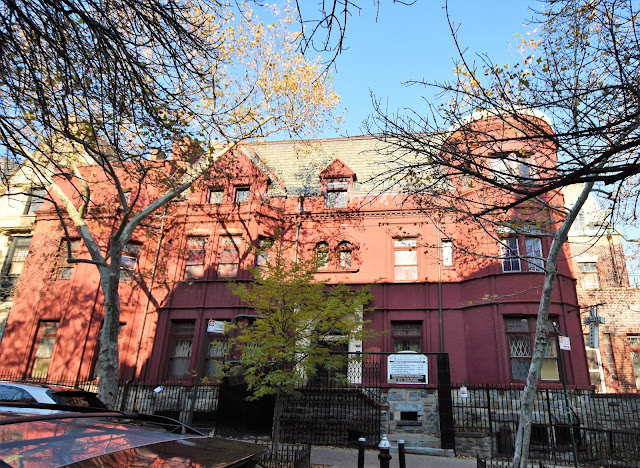 In 1886 William Mowbray was busy transforming the blocks around Convent Avenue and West 144th Street into a fashionable neighborhood.  The area, once part of Alexander Hamilton's estate The Grange, was quickly developing.  In December that year the Real Estate Record & Builders' Guide noted "More than twenty elegant houses, of English Gothic, Flemish and other styles, as modified by the taste of the architect Mr. Wm. E. Mowbray, are already planned and will be built without delay."

Many of those homes were designed for developers William H. DeForest and his son, also named William.  Mowbray's builder father, Anthony, constructed the residences.  But for Nos. 340 through 346 Convent Avenue, at the corner of West 144th Street, Mowbray acted as both developer and architect.

Not completed until 1890, the row was anchored by the impressive corner mansion.  Although the entrance was unquestionably located at No. 451 West 144th Street, the house took the address of No. 340 Convent Avenue.  All Mowbry's houses along the street were modern takes on historic styles.  But the red brick mansion was less quaint and more imposing than its neighbors.  A Victorian adaptation of French Renaissance, it featured a large corner tower with a conical cap, a basement level of rough-cut granite, and pedimented dormers which cut through the steep slate-tiled roof.


In 1905 the mansion became home to Joseph Romaine Brown and his wife, the former Annie Elizabeth Lockwood.  The 72-year old was still highly active in the real estate business and headed the J. Romaine Brown Company at No. 10 East 43rd Street.  He was deemed the "Dean of Manhattan Brokers."

He and Annie had married in April 1865.  By then he had had a widely-varied career.  He had started business by learning the locksmith trade; then in 1854 purchased the 34th Street stage coach line (it ran from 34th Street, down Broadway to 26th Street, then to Third Avenue and back), and two years later started his real estate business.

By the time the Browns moved into the Convent Avenue mansion, their four children were grown and Joseph Brown had accumulated a significant fortune.   That was partly due to the street car line which was formed in the 1850s.  Its founders wanted to run it along the same route as Brown's coach line, so they bought him out for $150,000--in the neighborhood of $4.25 million today.


In 1913, when the country was still suffering through the crippling financial depression known as the Panic of 1907, a reporter from The Sun visited Brown to get a veteran's views on the economy.  The article, which appeared on Sunday, August 31, encompassed half of the front page.  Brown boosted optimism among the newspaper's readers by retelling stories of earlier depressions--like the paralyzing Panic of 1873 that lasted until 1880.  The article noted "Mr. Brown expects that the experiences of 1878 are soon to be duplicated here, that is, the real estate market will turn from a period of inactivity to one of splendid business."

Two months later, 345 lots on Jerome Avenue were sold at auction.  The New York Times noted on November 2, "J. Romaine Brown, whose knowledge of New York real estate extends over a longer period that the great majority of brokers, showed his faith in the future of the Jerome Avenue lots sold by purchasing nearly the entire block front on the east side of Jerome Avenue" at 174th Street."

Brown used his reputation to further bolster confidence in the economy.  He chided other real estate men for not bidding, saying "the lots sold for absurdly low prices" and adding "anyone who will look back at the growth of New York can readily see that Jerome Avenue, in a short time, will be far better than Eighth Avenue, and more like Sixth Avenue, below Fifty-ninth Street, with stores and substantial improvements."

The house was the scene of considerable excitement the year after the Browns moved out.  Burglars did not expect Thomas Stuart to be in his West 142nd Street apartment on the afternoon of July 18, 1917; but he worked nights and was sleeping.   He was wakened by the sound of men trying to jimmy his front door open.   He surprised the would-be crooks but, "by reason of his attire was unable to pursue the burglars, but gave the alarm to passersby in the street," reported The Sun.

The two men were chased down 142nd Street and onto Convent Avenue "by an ever increasing crowd."  The accomplice of Charles J. Miller (described by the newspaper as "a Swiss, 26 years old) ducked into a construction site, then managed to reappear and slip into the crowd unobserved.  To distract the pursuers, he pulled a fire alarm at 145th Street and Convent Avenue.  The Sun reported that the ploy worked for him, but not for Miller who began "a systematic series of fence vaulting from one yard to the next." 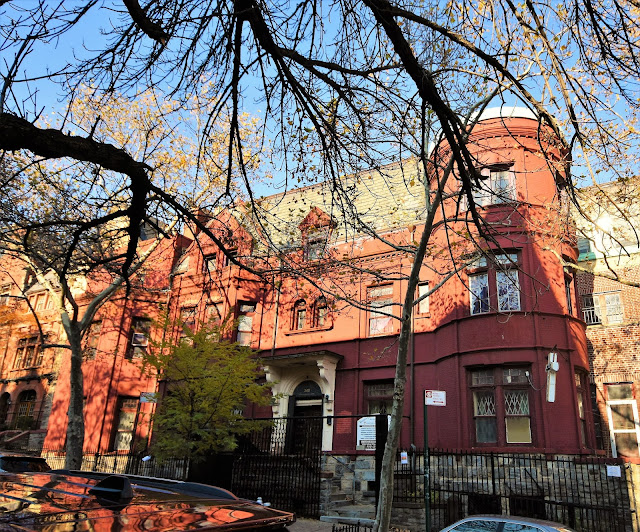 As Miller jumped over one back fence to another, Patrolman Whelan had joined the chase.  Unfortunately for the crook, the policeman had "won fame not long ago as a pole vaulter and gymnasium expert with the Irish American A. C."  The athletic cop "showed such superior technique in fence vaulting that he caught Miller in the yard of 340 Convent avenue."

Although Miller put up a fight, he was subdued and arrested.  At the police station, it was confirmed that he had been involved in several other burglaries in the neighborhood.

The following year, in June 1918, the mansion was purchased by the Little Sisters of the Assumption.  Their convent had been located since 1899 at Nos. 125-127 West 130th Street which a spokesperson said was, at the time, "a desirable residence locality."

Now, the President of the Little Sisters, Claire Daburon, explained the move in terms disturbing to 21st century readers.  She said a reporter from The Sun in late June that "within the last few years the character of the neighborhood had so changed because of an influx of colored residents that the site was no longer desirable for a residence and convent."

The Little Sisters of the Assumption was founded in 1864 in Paris.  The Catholic Encyclopedia described its work in 1922.  "The Little Sisters nurse the sick poor in their own homes, without regard to creed or nationality, accepting no remuneration of any kind.  In addition to caring for the patient, they keep the house clean and in order, prepare the meals for the family, dress the children and send them to school."

In 1922 the Little Sisters purchased and demolished the abutting house at No. 342 Convent Avenue.  Architect P. F. Brogan was commissioned to design a four-story addition to the mansion; a strikingly dissimilar red brick structure in a toned down version of the French Classical style which continued the original mansard.


The convent remained in the mansion until about 1960, when it became home to the Greater Tabernacle Baptist Church, which describes itself as "a small church with a big heart."  Although the conical cap of the tower has been lost and the facade painted red, the house is as attention grabbing as it was in 1890.