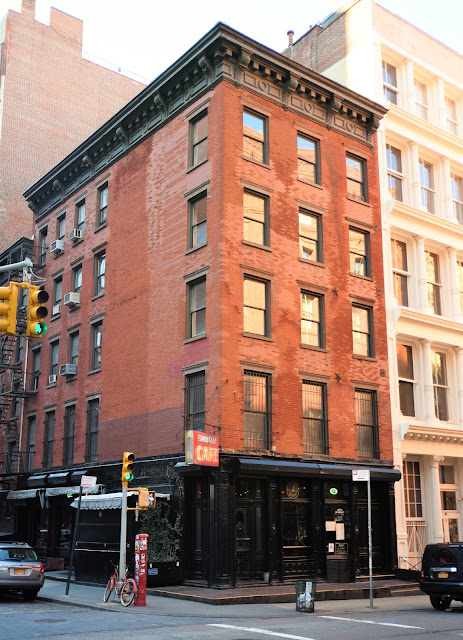 As the 18th century drew to a close, New York City was encroaching northward into former estates and farmland.  Some of them, like the property of wealthy loyalist James DeLancey, had been confiscated after their owners had been banished.

In 1797 a new street was laid out, running more-or-less east-west.  The land was owned by the Bayard family; having been deeded to Nicholas Bayard (nephew of Peter Stuyvesant) by the British Government in 1697.  Oddly enough, just 14 years after New Yorkers celebrated the evacuation of the British, it was given the name Prince Street.

By the 1820s the neighborhood had filled with brick-faced Federal style homes.  But the respectable tone of the district quickly declined.  By mid-century Greene and Mercer Streets were the center of Manhattan's red light district.

A small wooden house and store was located at the southwest corner of Prince and Mercer  in 1846.  The following year it was leased to 31-year old German immigrant Herman Gerken.  Gerken and his German wife, Anna, lived upstairs.  The couple would have four children, Anna, Henry, Maria (or Mary) and Theodore (called Gath).

In 1853 Gerken purchased the property, and five years later replaced it with a handsome five-story Italianate structure of red brick.   The openings were given brownstone sills and lintels.  A cast metal cornice with paneled frieze and foliate brackets completed the design. Gerken's saloon, which he euphemistically listed as "grocery," was in the ground floor space.

The Gerken family moved into the building, as did other renters.  One was a Mrs. Eldridge, who it seems, gave birth to an unwanted child in 1860.  On July 23, 1861 she placed an advertisement in The New York Herald in an attempt to find what today would be termed a foster family.

Board Wanted--For a Child Fifteen Months old--Inquire of Mrs. Eldridge, No. 94 Prince street, corner of Mercer, between 9 o'clock A.M. and 4 o'clock P.M.  None but American or Scotch need apply.

John Gerken worked in the saloon by 1863.  On the evening of March 3, three men briefly stopped in, paying with a $5 note.   Just weeks before the Government passed the National Currency Act establishing the Federal dollar, states and territories still printed their own notes.  This one was issued by The Highland Bank of Hudson City, New Jersey.

Except that it wasn't.

On March 6 The New York Times reported that a "well-concocted" counterfeit ring had been broken.  "About thirty of these notes were passed off upon shopkeepers and various retail dealers, in the neighborhood of Greene, Spring, Prince and Broome streets before the fraud was discovered."


The newspaper described the ringleader, George McDougal as a "well-dressed young man," who was "very prepossessing in his appearance, and, from his conversational powers, a man of education."  He appeared on March 5 at the Jefferson Market Police Court, where "he was confronted" by four complainants, including John Gerken.


In 1865 Adolph Hillon leased and operated the saloon.  He, his wife Mary, and their son George, lived upstairs.  Late on the night of October 13, 1865 George Hillon was visiting in the Gerken apartment.  Things got out of hand when Anna and her son, Henry, got into an argument.  The following day The New York Herald reported "by some unexplained means a pistol in the pantaloons pocket of the young man exploded, the ball lodging in his right thigh."

Infuriated, Henry pulled out the weapon and fired at his mother.  The bullet hit her in the face, lodging in her upper jaw.  In an apparent blind rage, he fired again, this time grazing George Hillon in the cheek.  "The fourth shot took effect in one of his own fingers," said the article.

Police soon arrived and took the parties to the station house.  The police surgeon was able to extract the ball from Henry's leg; but Anna was in much more serious condition.  She was taken to the New York Hospital.

Two days later The New York Herald reported that "the desperate young man arrested late on Friday night" had been arraigned on a charge of felonious assault and held on $1,500 bail.  Anna, "who is still lying in a dangerous condition at the New York Hospital," was unable to file charges, so George Hillon filed charges for not only for himself, but on her behalf.

At the time the downstairs saloon was listed in directories as a "porter house," a bar specializing in serving dark, porter beer.  In the neighborhood filled with brothels, its patrons would have been mostly working class immigrants more familiar with inexpensive beer than wine or spirits.

In the 19th century it was not the saloon owner, but whoever was on duty who was arrested for excise violations--most often serving liquor on Sundays.  Adolph Hillon was arrested, then arraigned at the Jefferson Market Courthouse on June 29, 1866.  His bail was set at $100, more than $1,500 today.

The following year, in February, William Smith was arrested for "exposing liquors for sale on the Sabbath."  His $300 bail made Hillon's seem affordable.

Herman Gerken's will left Anna "the use and profits of all my real and personal estate."  Each of the children received $1,500.  Although Maria was married when the estate was settled in 1867, she was still a minor; so the courts ruled she was "entitled to one-quarter of the amount, which must be paid to her husband, who is her general guardian."

Henry had opened his own saloon at No. 63 New Bowery by now.  But like his father he had problems with the Excise Board.  Finally, on November 26 that year, his liquor license was revoked.

Anna Gerken retained possession of the building; but she was apparently not interested in running the business.  On August 8, 1868 she placed an advertisement in The New York Herald.  "Oyster and Dining Saloon, with Private Supper Rooms for sale."

The upper floors had been operated as a boarding house; but while the Gerken family kept possession of the building, they left No. 94 Prince Street in 1870.  An auction was held on August 16 that year to liquidate the "boarding house and restaurant furniture."

Commerce had already begun taking over the Prince and Mercer Street neighborhood and the first of businesses within the upper rooms appeared in 1871 when Schmidlin & Driscoll, dealers in "lamps and reflections" were listed here.

Around the same time C. Richard and his partner ran an artificial flower manufacturing shop in the building.  On June 3, 1874 Richard looked to retire and offered a "splendid chance to make money--A businessman, with some cash, wanted, to take the place of a partner retiring, in a well paying business."

When he had no takers by September, he amended his advertisement.  "For Sale--A business in the artificial flowers line, cheap for cash; a competent man will remain to run the shop if desired."  He finally found a buyer in French immigrant Paul Madoule, who would be here into the 1890s.  The artificial flowers he made were indispensable for the millinery industry.

In 1878 Nicholas Gerdes took over operation of the saloon.   His liquor license in 1883 cost him $75, more than $1,800 in 2017 dollars.  It was most likely Gerdes who was responsible for the late Victorian saloon front that survives, with its exquisite etched and cut glass door panels.  His saloon would remain here until 1902.  More than a barkeeper, he dealt in neighborhood real estate as well; and in 1890 hired architect Julius Kastner to design alterations to his commercial building at No. 110 Washington Place.


Meanwhile the upper floors filled with apparel millinery and related firms.  In 1889 Frederick Oppenheimer headed Nusbaum & Oppenheimer, manufacturers of artificial flowers here; while the related company, Nusbaum & Co. made "straw and felt hats and bonnets" was also in the building.

On August 20, 1893 The New York Times reported "Soon after Frederick Oppenheimer's artificial flower factory, at 94 Prince Street, was closed yesterday smoke was seen coming from the upper window on the Prince Street side of the building."  Shortly after fire fighters arrived from the nearby Mercer Street station, the pumpers ran out of water.  A second alarm was ordered.

"When a full supply of water came it was the work of five minutes to get control of the flames, which had destroyed the roof and burned out the fourth and fifth floors," said the newspaper.  Oppenheimer's losses were estimated at between $20,000 and $25,000, and damages to the building were set at $4,000.

Cloak manufacturer Henry Neadel was in the repaired building by 1899.  That year, in July, his domestic problems became public when his wife, Bessie, sued him for "a limited divorce," $8 a week alimony and lawyer fees.  She accused her husband of "becoming infatuated with a model in his employ," neglecting her, and leaving her without means of support.  She said he "was taking the model round to theatres and other places of amusement and spending money lavishly upon her."


Neadel had another story.  He denied having an affair and said, "I never experienced a happy day with my wife since within a short time after our marriage, as she is possessed of an ungovernable temper and of a very disagreeable disposition, and has a great and abnormal avarice and desire for money."

Once he got started, he aired all the dirty laundry.  "My bed was not cleaned for months at a time, and my nights during the Summer were tortures to me and afforded me no sleep, because I had to lie awake fighting off bedbugs, all of which was the result of the neglect and carelessness of the plaintiff."

Neadel insisted his wife never cooked for him, but "would send to a delicatessen store and buy a roll, a little cheese, and a bottle of soda water;" the only meals he had for six months.  She would go through his pockets and take his money.  According to his testimony, when he asked for it back she would "scream in a loud voice 'Murderer!' and 'Stop hitting me!' so as to arouse the neighbors" and make then think he was abusing her.

Another apparel firm operating from the upper floors was furrier Pike & Rosenberg which remained until declaring bankruptcy in 1913.  By now Charles Hirschbein had succeeded Nicholas Gerdes in running the saloon; followed by Harry Green in 1905, who named it the Prince Cafe.  Business was substantially affected by Prohibition, which went into effect in January 1920.  In 1922 the Green family sold the business to Michael Fanelli.

The following year The New York Times reported on June 19 that Mrs. Anna C. H. Gerken had leased the "entire five-story building, 94 Prince Street," to the Nelson Dairy Lunch Company.  The article said the firm "will occupy same after extensive alterations are made" and noted "This building has been in this family and under one ownership for more than seventy years."

If the Nelson Dairy Lunch Company intended to install a luncheonette in the former barroom, it never came to pass.  And in 1928 Fanelli's employee Harry Bruns joined the long tradition of workers hauled off to jail.  He was fined $250 on November by Federal Judge William Bondy for possessing liquor.  The judge explained the substantial fine (nearly $3,500 today) saying "The question is one of observing or not observing the law.  Penalties will be severe enough to make lawbreakers realize that there is such a thing as law enforcement."

Throughout the century, as delivery trucks rumbled down the stone-paved streets, and the cast iron and brick loft buildings gathered rust and grime; the vintage saloon front of Fanelli's Cafe remained untouched.  In the last quarter of the century Soho was reinvented as a trendy district of artists' lofts, galleries and shops.  Once the haunt of immigrant workers, Fanelli's now hosted artists, musicians, and tourists. 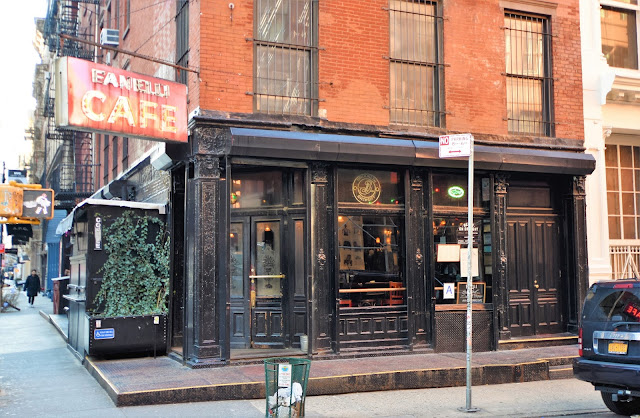 In 1982 the Fanelli family sold the business to Hans Noe, whose family still operates the landmark bar.  After 160 years Herman Gerken's red brick building survives little changed in a neighborhood that is anything but.