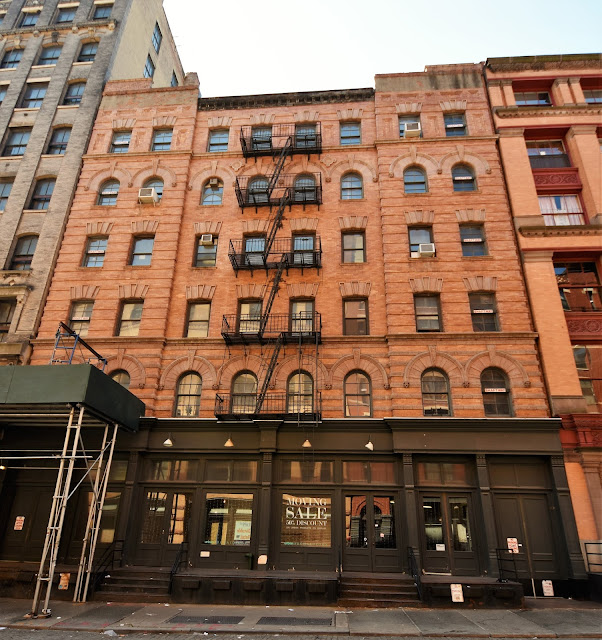 In 1897 those in the know in real estate circles recognized the opportunities still available in the district which would later be known as Tribeca.  Already the neighborhood had filled with looming commercial buildings spurred by the nearby Hudson River Railroad's freight terminal.

So that year when the widow Margetta K. Welsh offered for sale the three abutting two-story "brick and frame tenements and stores" at Nos. 143 through 147 Franklin Street, real estate operators jumped.  The titles would change hands about three times within days--the last being on June 19 when Henry G. Gabay paid Henry Walsh $105,000 for the properties (more than $3 million in 2017).

Gabay started out as a plumber employed by Butcher & Butler.  In 1877 he and a co-worker, Timothy McAuliffe, took over the firm, renaming it McAuliffe & Gabay.  McAuliffe died the year before Gabay purchased the Franklin Street properties.  Although they had continued their successful plumbing business, the Real Estate Record & Builders' Guide noted "the firm has been more prominent of late years as builders whose operations were carried on in the uptown sections of the city east and west of Central Park."

While McAuliffe & Gabay had commissioned some of the best-known architects for earlier projects--Thom & Wilson and A. B. Ogden & Son, for instance--for Nos. 143-147 Franklin Street Henry Gabay turned to an architect more known for his residential designs.

Henry Anderson would design a striking 69-foot wide loft and store building six stories tall.  Faced in yellow Roman brick and trimmed in limestone and terra cotta, its Renaissance Revival design was splashed with Romanesque Revival touches.   As the building neared completion on January 15, 1898 The Record & Guide noted it "is of modern iron frame construction.  The lighting throughout is done by electricity, although the building is piped for gas, and there is an electric freight elevator."

Gabay recognized the demand of a structure suitable for industrial tenants with heavy machinery.  The Record & Guide said "it is especially adapted to the use of one tenant, and more particularly, one conducting a business which it is necessary to store heavy goods.  The new building is one of the strongest and most substantially-built in this locality."  The upper floors were able to carry 430 pounds per square foot.


Among Gabay's first tenants was the American Woolen Company which signed a $14,000 three-year lease.  Organized in the spring of 1899, it was capitalized with a staggering $65 million.  A consortium of East Coast mills, it caused many small firms to tremble.  On May 29 J. Clifford Woodhull attempted to calm outsiders, telling reporters "Those who have the impression that the object of the combination is to advance the prices of goods will be mistaken."  Nevertheless, he added "New acquisitions to the combination are being made from day to day, and success is assured."  Indeed, within days the new organization had gobbled up the Mascoma Flannel Company and the Riverside Woolen Company.

In March 1900 Gabay sold the building to J. W. Doane for $250,000.  His tenants would include two salvage companies--the Underwriters' Salvage Company and The Gans Salvage Co.

In 1909 John A. Lowell's Bank Note Company operated from the building.   A steel plate engraver and printer of stocks and bond certificates, bank checks, and related items; the structure was ideal for its heavy presses.

Leo Popper & Sons glass company had moved into No. 143-147 Franklin Street by 1911.  That year it employed four men, two women and two children between 14 and 16 years old who made "glass buttons and beads."  Other employees manufactured plate glass mirrors, mirror-backed signs, and a variety of other glass products.

Founded by Leo Popper, an Austrian immigrant, in 1879, by 1894 the firm was internationally-known for its art glass buttons.  According to New York, 1894: Illustrated, "They import immense quantities of glass from Germany, France, Belgium, England, Austria and other foreign countries, carrying one of the largest and finest assorted stocks of French plate glass, window, car and coach glass, enameled, colored, ground and cathedral glass to be found in the city."

Despite U.S. President Woodrow Wilson’s policy of non-intervention in World War I, Germany continued to attack U.S. merchant ships and conducted sabotage.  On July 29, 1916, German agents set fire to a complex of warehouses and ships in the New York Harbor that held munitions, explosives and fuel intended for the Allies.  The resulting blast, known as the Black Tom Explosion, caused damage for several city blocks, sent debris raining down in Manhattan and New Jersey and damaged the Statue of Liberty.  The glass to repair the Statue's torch was supplied by Leo Popper & Sons.

The firm would remain in the building for decades; employing about 20 artisans at its peak.  It would provide the colored glass for the windows of the Cathedral of St. John the Divine and the Washington National Cathedral.

Throughout the rest of the century other industrial tenants would come and go, like Independent Starch Company, making its laundry starch here in the 1920s; the George E. Athans Co., makers of glass storage and canning jars at mid-century; and Lan Yik Foods, Inc., dealers in Asian foods. 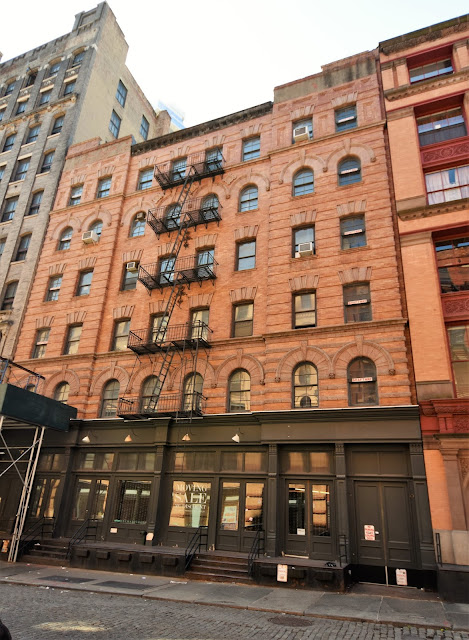 Through it all the cast iron-faced ground floor survived surprisingly intact. While the cornices and parapets of the two end bays have been lost, Henry Anderson's impressive facade is otherwise little altered.   In 2016 Urban Archeology left the expansive retail space when plans to convert the structure into residences was announced.
photographs by the author
Posted by Tom Miller at 2:31 AM