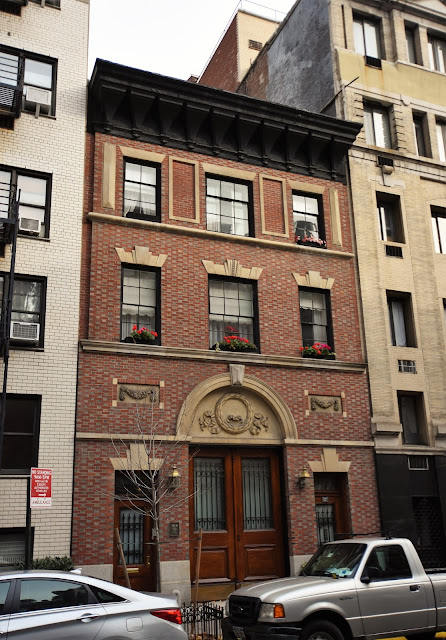 John H. Scheel lived in the three-story brownstone house at No. 121 East 83rd Street in the 1890s.  He was treasurer of the Yorkville Dispensary and Hospital for Women and Children.  The charity institution was "confined to the Dispensary for treatment of poor women and children only."

Around the turn of the century the house was converted as the headquarters of the Shawnee Club.  A Democratic political group, The New York Times on December 16, 1901 said it "represents Tammany power" in the district.

Scheel evicted his tenants when they stopped paying rent in October 1902.  But it appears to have been a mutual arrangement.  The Sun reported "Myer J. Stein said last night that the club quit paying rent in October at the request of the landlord, John Shields [sic], in order that the lease, which would have run to Feb 15, might be broken, as the property was to be sold."

The buyers were developers Evans & Buscall, who planned an upscale private carriage house on the site.  The block by now was filling with the private stables of Fifth Avenue millionaires.  In November Hamilton & Mesereau filed plans for a "3-story brick stable" costing $33,000--in the neighborhood of $940,000 today.

The office J. A. Hamilton and W. H. Mesereau was far downtown at No. 32 Broadway.  Mesereau was a structural engineer as well as architect.  Theirs was an intriguing partnership; apparently working independently as often as together as Hamilton & Mesereau.

A year earlier C. P. H. Gilbert had designed Frank W. Woolworth's new mansion at northeast corner of Fifth Avenue and 80th Street.  Construction on what Bankers Magazine deemed "one of the notably fine houses in that center of wealth and fashion" was completed just prior to the 83rd Street carriage house.

On July 21, 1903 The New York Times reported that Evans & Buscal had sold "the new three-story private stable" to Woolworth, noting that the price had been set at $50,000--a substantial $1.4 million in today's dollars.

While technically three stories, the carriage house rose to nearly the equivalent of four.  A half-story loft above the ground floor added to the height.  Hamilton & Mesereau had produced an extremely handsome edifice faced in Flemish-bond variegated brick.  The gray and tan headers contrasted with the red length-wise bricks.  Splayed limestone lintels and double-keystones reflected the neo-Federal motif; while carved panels of floral swags and a wreath and bow in the tympanum over the carriage bay were elegant neo-Classical touches.  The unusual triangular brackets upholding the cornice were a dramatic addition.


Woolworth's impressive fleet of vehicles and expensive horses were housed on ground level.  Behind the elegant structure would have been a much less appealing but necessary feature--the manure pit.  It was the odors (with the accompanying problem of flies) and the bothersome noises of stables that brought about "stable blocks" where there were few, if any, residences.

On the two upper floors the mogul's most important stable employees lived.  The main coachman and the groom are the most likely candidates.  In many cases the entire families of the employees resided in comfortable accommodations (discounting, of course, the manure stench).

By the time Woolworth died on April 8, 1919, the carriage house was already being leased to Murry Guggenheim.  Horses had given way to automobiles by now, and he had renovations done to the building that year, converting it to a garage for "not more than five cars."  Building Department records reveal that the top floor was to be used as a "dwelling for one employee."

A year after Woolworth's death, on April 22, 1920, the first of the auctions of his massive real estate holdings was held.  But three months earlier, the 83rd Street garage was sold separately to what the New-York Tribune, on January 13, described as "a well known businessman residing on Fifth Avenue."  That businessman was Murry Guggenheim.

He was the third of eight sons of Meyer Guggenheim.  Meyer's was a Horatio Alger-worthy story.  The Jewish immigrant arrived from Switzerland in 1847, starting out as an itinerant peddler.  When get-rich-quick prospectors headed West for gold and silver, Guggenheim invested in copper mines in Colorado.  Mining and smelting of copper, silver, lead and gold made the Guggenheim family's fortune one of the largest in 19th century America.

Murry Guggenheim and his wife, the former Leonie Bernheim, had two children, Edmond and Lucille.  Their mansion was at No. 998 Fifth Avenue at 81st Street, conveniently near the carriage house.

Throughout the years Murry and Leonie supported extensive charities.  In 1929 they formed the Murry and Leonie Guggenheim Foundation which built and maintained a dental clinic for indigent school children.  In 1921 he and his brothers donated $1 million for a private pavilion at Mount Sinai Hospital, and earlier he gave the hospital its first motor-driven ambulance.  He and his brother David presented the Central Display Greenhouse to the New York Botanical Gardens in 1919.

Following David Guggenheim's death in 1930 Murry became the head of Guggenheim Brothers.  He steadfastly went to his office at No. 120 Broadway every day until Friday, November 10, 1939 when, at the age of 81, he became ill.  He died five days later.

Guggenheim's estate was appraised at nearly $19 million and papers listed gifts from 1917 until his death at about $16 million.  His will bequeathed to Leonie the Fifth Avenue mansion, "his household and personal effects," property in Colorado, and "real property at 121 East Eighty-third Street."

The Guggenheim family continued to use the private garage for years.  Then, in 1965, the ground floor and "mezzanine" were converted to a photographic studio and the upper floors to a duplex apartment.  A subsequent renovation in 1996 turned the photography studio into medical offices. 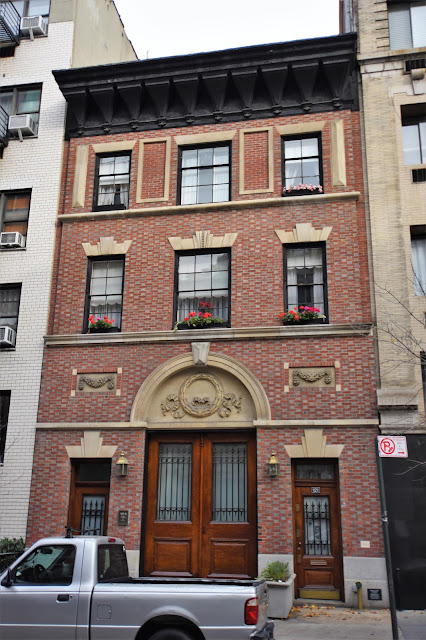 Today the Woolworth carriage house is one of only a handful which survive on the former stable block.  Its stylish 1903 facade reminds the passerby of the elegant housing the horses of Manhattan's wealthiest citizens enjoyed in the early years of the last century.

photographs by the author
Posted by Tom Miller at 4:02 AM