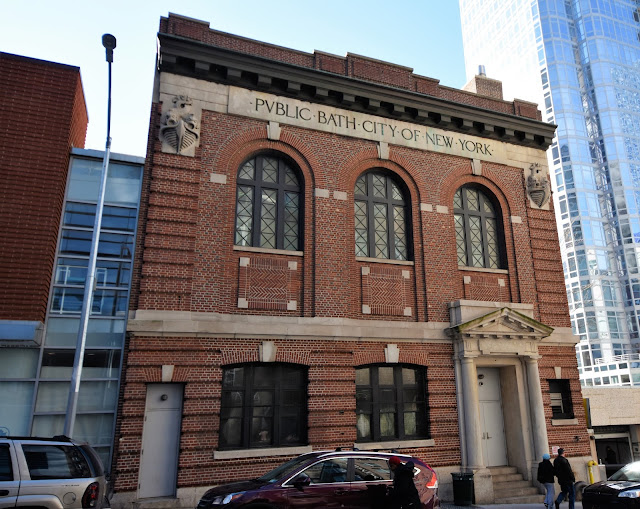 As the 19th century drew to a close and the city’s poor crowded into cramped tenements, the problem of bathing was increasingly serious.  In the Lower East Side in 1896 there was one bathtub for every 79 families.

Half a century earlier the public had demanded action by the city.  By the time of the Civil War middle- and upper-class families in New York had begun bathing regularly, as the Europeans did.  But the lower classes had no means to bathe.  By 1858 the Committee for Free Public Baths had been formed, but nothing would be done about the situation for decades.

Even after the New York Senate passed a law on April 21, 1895 requiring that all first and second class cities create free public bathing facilities, Manhattan's citizens would continue using the "floating baths" at the river banks.  The city's first "interior bath" did not open until 1901; governmental red tape miring the process.

While the Upper West Side above the 60s was still a relatively new district with, mostly, fine homes and modern amenities; the neighborhood chosen for the baths was decidedly gritty.  Known as San Juan Hill (the origin of the nickname is unclear), it was a dangerous and crime-ridden area  mostly populated by poverty-stricken blacks.

Architects Werner & Windolph designed the structure, which reminded the visitor of the ancient Roman history of public baths.  Essentially Beaux Arts, the facade was splashed with ancient Roman elements.  Classical entrances--one for men and the other for women--were capped by triangular pediments.  The large arched openings exhibited Roman-style cross-hatching, and ancient boats overflowing with gruesome sea beasts carved from limestone protruded at the top of the rusticated brick piers.


Perhaps surprisingly, given the seamy neighborhood, extra expense went into the elaborate brickwork--Flemish bond on the first floor, herringbone panels below the openings, and intricate diapering that resulted in a diamond pattern effect. 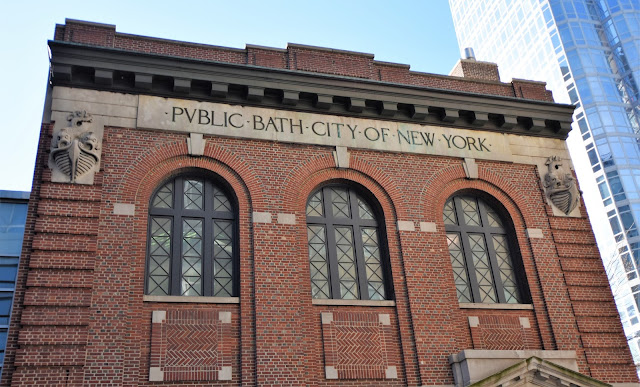 When the building was later extended through the block to West 59th Street, Werner & Windolf gave that elevation a starkly-different neo-Tudor facade that smacked of a firehouse.

The West 60th Street Interior Baths was remarkably different than its predecessors--it contained a plunge, or what today would be called a swimming pool.  Earlier, bathtubs and plunges had been prohibited for health purposes.

The pool here measured 66 feet by 25 feet with a sloping bottom that ran from three feet deep to seven.  Even more remarkable, according to Domestic Engineering, it was heated to a temperature of between 70 and 75 degrees.  It was open to men and women on alternating nights.


The Christian Advocate, in remarking on the trend of public baths on July 25, 1912 reported "This bath is noted for its great swimming pool, the tank of which holds 85,000 gallons of water, every drop of which is filtered, and no bather is permitted to enter the plunge without first taking a precautionary shower.  Thus there is small danger of contamination, and it is as clean as any private bath tub."  The water was completely changed three times a day.

The West 60th Street Interior Baths became, because of the pool, not merely a place for bathing, but for fun and athletics.  "The pool is largely patronized by the boys from neighboring schools," said The Christian Advocate, "who enter into all manner of water contests, and perform some truly remarkable 'stunts,' as, seated upon imaginary horses, which are in reality barrels having wooden heads attached, and gaily decked out in colored calico trappings, they dash back and forth in the water, using long poles to steady themselves, evading attacks and thrust, and boy who remains longest upon his mount of course winning the contest." 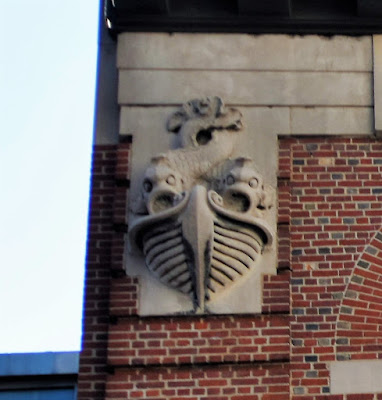 Patrons entered directly into waiting rooms where they sat on long benches awaiting their turn.  Also on the first floor were "bath cabinets," or showers.  Tiny dressing rooms contained hooks for clothing and a small marble seat.  Originally, soap and towels were provided "at a minimal charge;" but when  housewives made a habit of pinning the towels inside their skirts and spiriting them home, the practice was halted.

The Sun reported on the success of the interior baths project on July 15, 1906.  Its description of the West 60th Street facility can only be described today as shockingly racist.   "Best of all the present interior bathhouses is that at West Sixtieth street between Amsterdam and Eleventh avenues.  It is the newest of the half dozen in operation, and when it was opened the public bath officials thought it would prove a resort for the colored population that congregates thereabouts.

"Instead of that, it is rare to see one person of color there.  The bath is patronized principally by Hebrews and Italians, with the former in the lead.  Bath records show the Hebrew to be the best patron of the New York public baths, with the Italian a fairly good second."

Operating the baths was not inexpensive.  The City paid a total of $21,825 in salaries and wages for the 60th Street staff in 1910--more than half a million dollars in 2017.  But the outlay paid for more than public cleanliness and boys having a good time.  For years the pool would be the venue for public school swimming meets and for money-producing exhibitions.

One of those exhibitions caused extreme disappointment.  On April 29, 1907 Annette Kellermann, the world championship Australian swimmer, was to appear here.  But she was a no-show.

The New York Times reported "A large number of spectators, among whom were many women, had assembled and they waited patiently until nearly 11 o'clock, when the announcement that Miss Kellerman had apparently changed her plans ended their weary waiting around the tank."

To mollify the crowd, an impromptu 60-yard swimming race had been put on, and Paul Roetger, former fancy diving champion of Germany showed off his talents.  In an unexpected breach of Edwardian deportment, the restless crowd "amused itself by jeering the swimmers."

Annette Kellermann made up for the offense by appearing a month later.  Making a point that she "will give exhibitions in only four or five American cities," she appeared on May 4.  The Times announced the day before that a "special programme has been arranged for the evening."


In 1912 at least 1,400 bathers, "mostly young boys," according to The Sun, went to the pool daily.  The open dressing rooms with the exposed hooks for clothing proved easy pickings for thieves.  On July 16 the newspaper noted that thefts "have become so common that the attendants make no attempt to keep count of them."

A. B. Carman, a teacher in the Y.M.C.A. on West 125th Street returned to his compartment to find that not only had his $95 been taken, so had his trousers.  The Sun complained "If there is no money they take a garment or a pair of shoes."

The City was aware of the problem and that same month the Record and Guide announced that bids were being taken for "construction and erection of new doors to all shower rooms, tub rooms and dressing compartments."

The baths continued to host swimming contests for years.  On January 25, 1920, for instance, The Sun reported "The 100 yard metropolitan swimming championship for women, scheduled to be held in the Interior Bath at Sixtieth street" would launch the 1920 season "in water sports for mermaids."

Another champion to visit was Hungarian-born American swimmer Johnny Weissmuller.  In announcing the Municipal Athletic Activities' swimming meet scheduled for March 31, 1922, The New York Herald promised "One of the features of the occasion will be the appearance of John Weissmuller, the season's swimming marvel and world's title holder."


Although he was one of the world's fastest swimmers in the 1920s, earning five Olympic gold medals; he would be better remembered for his screen role as Tarzan, starting in 1932.

Another Olympic champion who had no doubt used the pool was Gertrude Ederle.  Born nearby, her father ran a butcher shop on Amsterdam Avenue, according to her biography America's Girl.  Following her successful swim across the English Channel in 1926 (a feat which eluded Annette Kellermann 11 years earlier), the girl from a humble Upper West Side home was given a ticker tape parade on Broadway.


By the time of the Great Depression the West 60th Street Interior Bath had suffered from constant use.  The Works Progress Administration closed the building in June 1938 for renovations.  The project not only provided necessary updating and repair, but gave jobs to unemployed workers.  It was most likely at this time that the Men's entrance was removed; its scar seamlessly hidden.

The renovated pool was used for a combined effort by the Department of Parks, the United Merchant Seamen's Service, and the Seamen's Church Institute in 1943.  The New York Times reported on February 20, "A learn-to-swim campaign for merchant seamen will be started tomorrow," and noted "The three agencies urged every seaman to learn this live-saving art, and pointed out there would be no charge for admission...or for instruction." 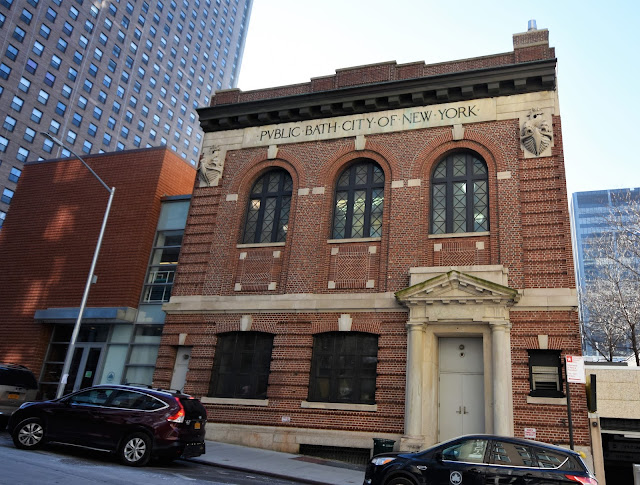 In 2013 the West 60th Street bath building opened after extensive renovations as the Gertrude Ederle Recreation Center, including an addition to the east designed by Belmont Freeman.  The last relic of early 20th century architecture on the block, the original facade survives handsomely intact.