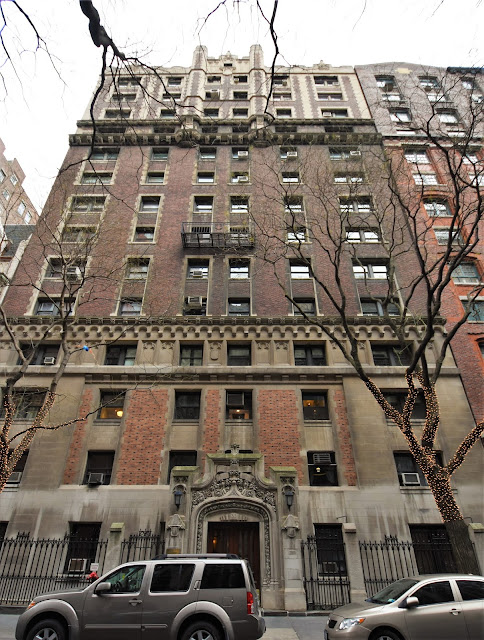 On December 5 1903 The New York Times announced "Plans have been filed at the Building Department for the new studio building to be known as The Atelier."  The article noted "It is to be a T-shaped structure of Holland brick, with limestone trimmings, with a frontage of 75 feet."  Estimated to cost $250,000 (nearly $8 million today), it was being designed by Simonson, Pollard & Steinham for builder-developer William J. Taylor

The concept of a "studio building" was in no way new.  In 1857 James Boorman Johnson had envisioned a building exclusively as living and working space for artists.  The resulting 10th Street Studio Building, designed by Richard Morris Hunt, initiated a movement.

By the turn of the century studio buildings, many of which were upscale, were cropping up throughout the city.  Vast widows--often two stories tall--were positioned to admit the much-needed northern light.

Nowhere, however, was the studio movement more evident that on West 67th Street.  A year earlier Taylor had already begun construction on the 67th Street Studios, abutting the Atelier site, for a group of artists headed by Frank V. D. Du Mond, Henry W. Ranger, and Louis Paul Dessar.  In 1905 work would commence on the Colonial Studios, at No. 39 West 67th Street, and before long the block between Columbus Avenue and Central Park West would be filled with similar structures, earning it the name "the Studio Block."

Construction on The Atelier began in 1904 and was completed the following year.  Simonson, Pollard & Steinam created a 14-story neo-Renaissance-style structure of ruddy brick and limestone.  Despite the elaborately-carved entrance, the variegated Flemish bond brickwork, and the stone quoins of the base and central section; it was the upper four floors--looking like a chunk of Renaissance palace--which most distinguished the structure.

The Atelier, as was the case with the other 67th Street studio buildings, was cooperative.  Its residents were not struggling artists, but well-established and financially comfortable.

Among the first to move in was the family of Boudinot Keith.  Although Keith was not an artist--he was a well-known lawyer and reformer--both his wife and mother-in-law had already earned reputations in the art world.  Dora Wheeler Keith, his wife, was a muralist and painter who had already done portraits of figures like Harriet Beecher Stowe, William Dean Howells and Walt Whitman.  In 1893 she had painted the ceiling of the Women's Building at the Chicago Columbian Exposition.


Her mother, Candace Wheeler, lived with the family in the Atelier.  In 1906 Louise Forselund, writing in Good Housekeeping, rather romantically said "In the Atelier building in Sixty-seventh street, New York, where artists, both men and women, seek to capture on canvas Beauty all the day through, there lives with her artist daughter, Dora Wheeler Keith, an old lady who has gone back to the home-keeping days of the ingle nook and who with her restful needle stitches few dreams for herself now save the dreams of the past."

Forselund was obscurely referring to Candace Wheeler's founding of the School of Decorative Art in the 1870s where women worked in embroidery and fabric design.   She also founded the Onteora Club, and wrote several books on home decoration.  For years she was the head of the Associated Artists, of which she was a founder.

The internationally-known brothers Francis Coates Jones and Hugh Bolton Jones moved into the Atelier Building in 1906.  Francis's paintings of women in lavishly-decorated interior settings had earned him a solid reputation and he taught at the National Academy of Design for three decades.  Hugh, on the other hand, was best known for his detailed and peaceful landscapes influenced by the Hudson River School.

The studios, often expensively decorated, were also the scenes of receptions and other entertainments.  On the evening of December 8, 1907 painter Alphonse Jongers and his wife gave a "soiree musicale" during which "Mme. Adelaide Norwood, who has recently returned from Europe, sang," according to The New York Times the following day.  Among the wealthy patrons in the room were Mr. and Mrs. George A. Hearn.   The owner of one of the largest dry goods stores in the city, James A. Hearn & Son, he was among the foremost art collectors in the nation.

Also among the party that evening were portrait artist Ben Ali Haggin and his wife, Bonnie Glass, who also lived in the building.  Bonnie's claim to fame was that she had been Rudolph Valentine's former dancing partner.

At the time former opera singer Ethel S. Elliott was having financial problems.  She had married the millionaire President of the Consolidated Arizona Smelting Company, John Love Elliott, in 1900.  When she divorced him in 1907, he agreed to pay her $20,000 a year in alimony.  The carefree divorcée moved into the Atelier Building and began freely spending the money.

In fact, she spent more than her sizeable income (equal to more than half a million dollars today).  In September 1911 she filed for bankruptcy, explaining that she needed to "get rid of" her debts.  Her unhappy creditors included Tiffany & Co. and at least two Paris dress makers.  She owed $11,000 for "dresses, hats and furs," $1,391 for jewelry, and $222 in fur storage.  Other expenses she was unable to pay included the cost of  "saddle-horse hire," $200 for hair treatment, silverware, flowers and $310 in music lessons.

Ethel Elliott's financial embarrassment was unique among the residents at No. 33 West 67th Street.  That same year, for instance, sculptor Edward Edgar Walter (who had studied under Auguste Rodin) received the profitable commission from philanthropist Alfred Seligman for a Central Park fountain.  A newspaper described the work as "a large rock with a base hollowed out in a cave.  From the entrance of the cave a faun looks at a bear on top of it."  Sadly, Seligman was killed in an automobile accident before the completion of the Bear and Faun fountain in 1914.

In 1915 Walter and Louise Arensberg began hosting a nightly salon in their duplex studio.  They had already assembled what was considered a "daring" collection of avant-garde artwork, including African and pre-Columbian pieces intermixed with paintings by Henri Matisse and Marcel Duchamp.

According to Carolyn Burke in her 1996 Becoming Modern, the Lift of Mina Loy, the Arensberg salons were the New York equivalent of Gertrude Stein's in Paris.  "Their nightly gatherings were known for scintillating talk and racy innuendo," she writes.  And the list of artists who came and went "reads like a Who's Who of modernism."

Among the Arensbergs' close friends was Marcel Duchamp who was a house guest for a few days.  Later Walter Arensberg provided Duchamp a studio in the Atelier, two floors above theirs.  In return Duchamp gave the Arensbergs his sculpture The Large Glass, (or The Bride Stripped Bare by her Bachelors).

While the avant-garde gathered in the Arensberg studio, artist and illustrator James Montgomery Flagg was working on more conventional projects.  When the United States declared war on Germany on April 6, 1917, a patriotic fever swept the nation.  Flagg, inspired by Alfred Leete's 1914 British poster of Lord Kitchen announcing "Your Country Needs YOU," created what would become the United States' most iconic recruiting image.

Flagg used himself as the model for Uncle Sam, magnifying his angular features and adding a beard.  First published in Leslie's Weekly in July 1916 (hence Uncle Sam's Independence Day outfit), more than 4 million posters were published.  Flagg's image with its "I Want YOU for U.S. Army" is credited with significantly boosting recruitment.

Francis C. Jones and Hugh Bolton Jones, too, turned their attention to the war effort.  On April 14 1918 The Sun said that they "are beyond the age at which men put on khaki and go to the front...But they have found a way to help."

The newspaper explained that in their Atelier Building studio they "are preparing many landscapes known as designation targets."  The five by nine-foot canvases depicted French scenes--villages and countrysides, for instance--to be used at targets in training army recruits.  "The Messrs Jones have dropped all their work in order to devote themselves to preparing landscapes for shooting."

"The average New York youth will go through the canyonlike streets something in the manner of a rabbit in a warren," said The Sun.  "He sees only a small distance ahead of him...The landscapes which the Academietans are now preparing take the place of the views of the country which a soldier would encounter if he were aiming field pieces or machines guns on the European battle front." 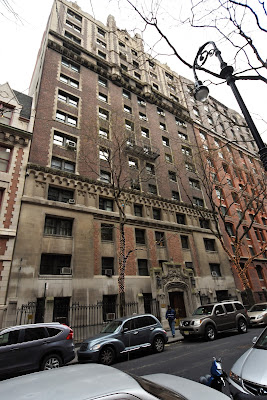 On August 5, 1923 the 97-year old Candace Thurber Wheeler died in the Keith home.  Two years later Boudinot Keith died in the studio, at the age of 66. Although somewhat overshadowed by his wife's and mother-in-law's artistic careers, he had earned a reputation as a leader in several reform movements.  Dora Wheeler Keith would remain here until her death in December 1940.  The 85-year old had painted the ceiling of the Capitol Building in Albany and her portraits hung in institutions like the Brooklyn Museum and the Boston Public Library.

The Jones brothers, too, stayed on in their studio until their deaths.  Hugh Bolton Jones died in September 1927; and Francis died in the studio on May 27, 1932 at the age of 74.

In 1929 insurance broker Duncan MacD. Little and his wife held their first "movie party" in their studio.  Little had taken up amateur motion picture production as a hobby and a small group of friends were invited over for a showing.  A tradition was started which continued to grow.

On April 5, 1936 The New York Times reported that "Amateur movie-goers enjoyed a brief hour of glory last night at the seventh annual 'movie party' held at the home of Mr. and Mrs. Duncan MacD. Little...Before an audience of fellow producer and innocent spectators, they unreeled the best specimens of their camera work and beamed like budding Sam Goldwyns when the guests applauded."

The following year what was now known as The Amateur Cinema had grown too large for the  Littles' apartment and was held at the Salle des Artistes.  A predecessor of the many amateur film festivals to come, in 1938 it included motion pictures from other countries.

The Atelier Building continued to be home to well-known artists for decades.  Samuel Johnson Woolf painted Mayor Fiorello H. LaGuardia here in 1941; Betsy Potter Vonnoh was still here when she died in 1955; and sculptor George Lober and landscape artist Roy Brown were both living in the building at the time. 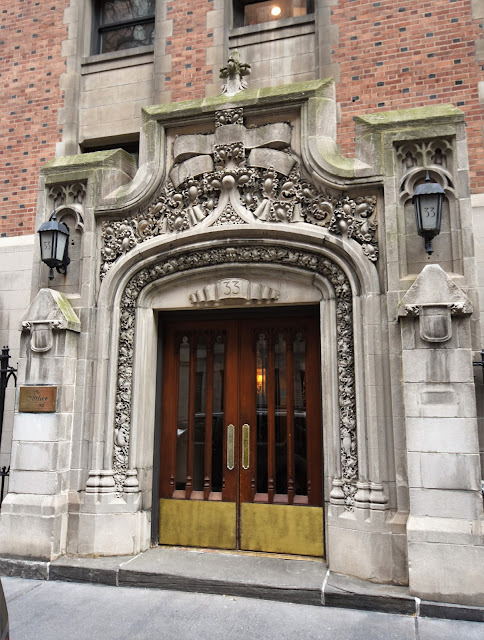 Little has changed outwardly to the Atelier Building.  It sits quietly, as it has since 1905, along the Studio Block; its remarkable carved entrance prompting more attention than its remarkable contributions to the art history.