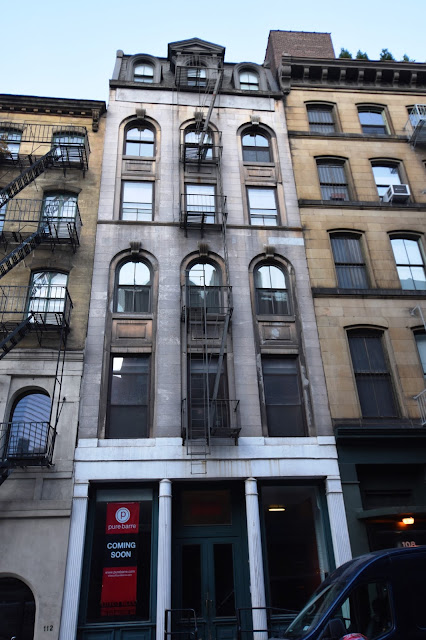 In 1705 Queen Anne deeded an immense tract of land north of New York City to Trinity Church.  Stretching from Fulton Street to Christopher Street in Greenwich Village, and along the Hudson River east to about Broadway, it became familiarly known as Trinity Farm.  Initially the church leased large plots mainly to farmers; but as the city inched northward, streets were laid out and houses, then commercial properties were erected.

In 1860 the church leased the plot of land at what was now No 110 Reade Street, between Church and West Broadway, to furniture designer and manufacturer Alexander Roux.  The five-story Italianate structure, completed the following year, was emblematic of Roux’s wide-spread reputation for creating the best and most lavish.

He and his greatest and (only true) rival John Henry Belter manufactured the most expensive and elaborate Victorian furnishings of the day.  Their complex Rococo Revival suites decorated America’s grandest mansions and Roux’s intricate pieces were especially favored in the plantation and city mansions of the South.

Roux’s building on Reade Street was faced in gleaming white marble.  The verticality of the structure was emphasized by visually joining the upper openings within two-story arches with scrolled keystones and paneled spandrels.  The cast iron storefront featured fluted columns which originally sprouted intricate Corinthian capitals.

It seems doubtful that Roux ever used the building for his own business; not even as a warehouse.  In 1862 city directories list James Vanbenschoten’s grocery store on the ground level.  (The grocer lived rather inconveniently far away at No. 84 West 28th Street.)  Vansbenschoten was here until 1865 when Victor E. Mauger listed his “stationery importers” business at the address.

It appears that when Mauger moved his business in (including his playing card factory on an upper floor), Roux appointed him manager of the building. On December 6, 1866 an advertisement appeared in The New York Herald:  "To Let--Store, Basement and Sub-Basement of marble front building, 110 Reade street."  The ad insisted on "a first class tenant" and directed inquiries to Victor E. Mauger.

Dundas Dick & Co. took space in the building.  It produced “Sandalwood Oil Capsules” which it touted as using more Oil of Sandalwood than “all the Wholesale and Retail Druggists and purfumers [sic] in the United States combined.”  Because the capsules were soft, Dundas Dick & Co. assured they “solve the problem long considered by many eminent physicians, of how to avoid the nausea and disgust experience in swallowing.”  According to an advertisement in The Home Journal of Winchester, Tennessee on November 20, 1873, “These are the only Capsules admitted to the last Paris Exposition.”

Victor E. Mauger’s business ambitions went beyond stationery importing and building management.  Aggressive and energetic, he seems to have been unafraid to branch out, grasping whatever opportunities looked promising.  In 1872 he was still focused on stationery and printing—exhibiting the latest in playing cards in the annual exhibition of the American Institute.  But when he took on a partner, John Petrie, his firm would expand into a mind-reeling variety of unrelated products.  Before then, however, he and his landlord, Alexander Roux, made changes No. 110 Reade Street.

In 1871 architect John G. Prague was hired to modernize and enlarge the structure.  He added a sixth floor in the form of a slate-shingled French Second Empire mansard roof—the latest in architectural fashion.  Prague's impressive addition featured three arched-windowed dormers, the middle of which grabbed attention with its elaborate framing and triangular pediment.

The Fire-Proof Building Co. of New York used the addition to promote its product.  An advertisement in the New-York Tribune claimed that the "rate of insurance has been reduced 90 cents per $100" at 110 Reade Street "after our Fire-proof Lining had been added to the Mansard." 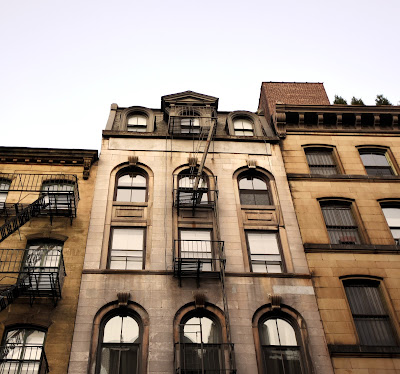 A starkly different product was the firm’s Victor Baby Food, introduced about 1880.  Promised to be an “invaluable and strictly American Food,” it was touted by advertisements to be the “best known substitute for mother’s milk.”  Consumers were prompted to use it for “the aged, the sick, or convalescents,” as well.

Magazines filled with Victor E. Mauger & Petrie advertisements.  In 1879 another product being hawked was Chinkalyptus.  Taken in pill form, it was guaranteed to be an antidote for chills and fever.  An ad urged readers “Escape Malaria this Season by taking Chinkalyptus.”  Consumers spent 25 cents for the “best general tonic and dinner pill.”

In the September 4, 1880 issue of the Army and Navy Journal, the firm advertised the American Star Soft Capsules, sold in “metallic boxes, Star stamped on cover, with blue wrapper with star on cover.”  The ad declared the capsules were “Cheapest, quickest, surest, best, and most reliable Soft Capsules.”  The one detail it omitted was what the capsules were supposed to do.

That same year Victor E. Mauger and John Petrie retired.  An innocuous mention in The American Stationery on October 19, 1882 noted “John Petrie, Jr., successor to Victor E. Manger & Petrie, reports an unusually large demand for A. B. French inks.”  Petrie would continue business in the location at least through 1889.

Fort Industry Manufacturing Company was operating from No. 110 Reade Street that year.  On December 16 it advertised for women sales agents for a unique item.  "Wanted--Lady canvassers for the sale of a novel toy lung tester, the most amusing little article ever offered to the public; easy sales; big profits."

The upper floors of No. 110 continued to attract a variety of businesses.  In 1890 the New York sales office of Philadelphia-based machine manufacturer, Welsh & Lea, was here.

By now the footwear district was taking over the Reade Street area.  In 1897 J. Faust & Sons, “boots and shoes,” was perhaps the first such business in the building.  They were joined the following year by shoe maker Bernhard Friedman.  Also occupying space in 1898 were a cigar factory, M. Brilles & Co.; a cigar wholesaler, Weber & Erskine; Richard V. Vahjen’s “silver plated ware” business; Isidor Nellenbogen’s shaving brushes factory; two manufacturers’ agents, Charles H. Nesbitt and Louis Schlesinger; and the “wines and liquors dealer,” Charles H. Koch.  (It is possible that Koch’s liquor store was in actuality a saloon.)

Although Weber & Erskine were still in the building in 1901 selling cigars; the shoe trade made up the majority of tenants.  That year the Havre-de-Grace Shoe Mfg. Co. was here, and by 1904 Carl H. Krieg & Co. had made No. 110 home.

Krieg did not deal in actual footwear, but in “findings” or accessories.  In 1904 The Canadian Shoe and Leather Journal deemed Carl H. Krieg & Co.’s new catalog “the most complete list of shoe retailers’ supplies it would be possible to have.  Nothing is omitted from the tack hammer to the store furniture, every conceivable necessity in a well-equipped shoe store is enumerated.”

On September 31, 1907 Boot and Shoe Recorder called Carl H. Krieg & Co. “the leading wholesale finding establishment of the metropolis” and advised “It should be borne in mind that a concern such as Carl H. Krieg & Co. sell everything in the shape of findings for the retail trade.”  The journal suggested that with winter approaching, retailers should stock up on Krieg’s “overgaiters and leggings.”

Krieg's advertisements called the business "The House of Krieg" and used the tag line "Everything but the Shoe."

Before many years the shoe district would abandon Reade Street.  In 1913 attorney Emil J. Unger opened his office in No. 110, and the following year M. J. Grady Company leased the store.  Michael J. Grady was the head of that company, which dealt in twines.  It would remain at No. 110 Reade Street into the early 1920s.

G. C. Arrowsmith took space in the building in 1919.   The firm manufactured harness hardware and “horse clothing,” and dealt in hides and leathers.  Like M. J. Grady Company, it lasted in the building into the 1920s.

The changing Tribeca neighborhood was reflected in the tenant list.  In 1932 the Diagraph Stencil Machine Corp. was doing business in No. 110.  But even greater change for the district was on the horizon.

By 1972, as Tribeca slowly became trendier, No. 110 Reade was home to Living, Module, Inc.  The firm crafted custom-designed interior “environments” for apartments.  That year, for instance, it designed and installed a children’s bedroom on the Upper West Side.  According to journalist Rita Reif of The New York Times two years later, “It took [Douglas] White three weeks to install the wall-to-wall, double-decker assemblage of bridges, bed, ladders, storage and a basketball court.” 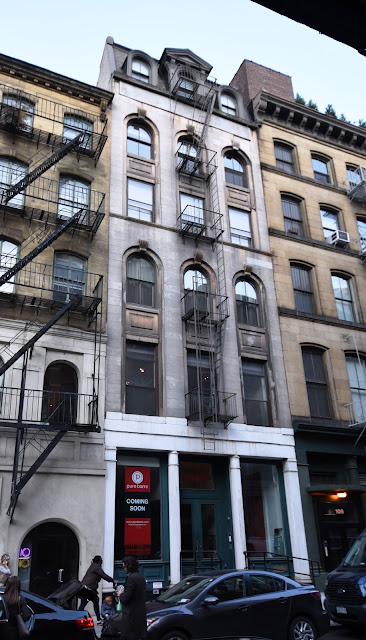 In 1982 the upper floors were converted to residential space.  The ground floor store became Nam, a Vietnamese restaurant, in October 2001; and then the Thai food restaurant, Lotus Blue, in 2012.  Despite replacement windows, a 20th century fire escape, the sad loss of the cast iron column capitals and a coating of dirt; No. 110 Reade Street still somewhat haughtily demands respect; just as Alexander Roux intended.