The Miraculous Survivor at No 160 East 92nd Street


In the decade before the outbreak of the Civil War the village of Yorkville still retained its identity, separate from New York City to the south.  Yet the area, only sparsely populated with farms and summer estates half a century earlier, had seen rapid development in the early years of the 19th century.  In 1826 the New York Evening Post remarked “Twelve months ago here were not more than two or three buildings on the barren rock, where there are now upwards of sixty, some of them built in a good substantial manner.”

Despite its relatively remote location, Yorkville was not overlooked by the 1811 Commissioners’ Plan which dissected Manhattan into a grid of streets and avenues.  As building plots became available, far-sighted developers purchased many of them for speculative projects.

In 1835 Albro Howell listed himself in city directories as a carpenter.  Later, after 1852, he would add “builder” to his resume.  Until 1851 Howell had lived downtown and he continued to operate his office there. But that year he moved to Yorkville where it seems he built his own house at No. 166 East 92nd Street.

Howell had gobbled up several vacant lots on East 92nd Street.  Historians generally agree that the covenants he put together included the understanding that he personally would construct the subsequent homes.  The contracts for lots 44 and 45 (which would be numbered Nos. 160 and 162 East 92nd Street when structures appeared) included the restraints against any “trade or business which may be offensive or noxious to the neighboring inhabitants.”  In a single sentence Howell prohibited a malodorous stable or slaughterhouse, for instance.

In May 1852 Robert N. Hebberd purchased the two lots.   Most likely Albro Howell was responsible for the quaint two-and-a-half story clapboard house at No. 160 East 92nd Street.  Charming in its country feel, it combined elements the currently popular Italianate and Greek Revival styles; most likely chosen from style books.

The days of wooden construction in Manhattan were drawing to an end.  The City of New York had twice been nearly destroyed by fire and in 1865 the horrendous blaze at Barnum’s American Museum was one of the most spectacular in memory.  Wooden construction was outlawed in New York City the following year.

Robert Hebberd was a bookkeeper and his two grown sons, William and Gilbert, were clerks—a 19th century term that covered all nearly all non-supervisory office workers.  The lot next door remained vacant until 1858 when the family erected a similar house.

Hebberd sold No 160 in 1864.  Cabinet maker Joseph H. Stage lived here in 1872 when he exhibited his “cottage and suite of furniture (in miniature)” at the American Institute of the City of New York.  The unmarried Helen J. McArthur lived here for at least two years, in 1874 and 1875, while teaching in the Boys’ Department of Grammar School No.53 on 79th Street near Third Avenue.  She no doubt rented a room in the house.

John T. Rosekrans purchased the house in 1878.  If he lived in it at all, he was leasing it by 1890 to Dr. R. B. James.  The distinguished physician’s writings repeatedly appeared in the Journal of the American Medical Association.  One such article was entitled “The Value of Atropia in Enuresis” and was published in July 1890.

Breslin worked for the City as a foreman in the Washington Market, making $16.50 a week.  About half his salary went to the rent—he paid John Rosenkrans $33.00 a month for the house.  Catherine Breslin explained the family finances later.  “He gave his full salary…to me.  He did not keep anything, only what I would give him out…Out of the $16.50 a week he paid the rent for the family with a little assistance of the others; two were working, Eunice and William.”  William was earning $6 a week and Eunice was making about $8.  None of the other children had jobs.

On June 5, 1904 Christopher was married.  He was the first of the Breslin children to move out of the house.  But one less mouth to feed did little to lighten the Breslins' financial situation.

Two days later at around 7:00 in the evening, Henry Breslin stepped off the curb at Third Avenue and 86th Street.  Just as he was about a foot from the opposite side of the avenue, a team of four horses pulling a Borden’s Condensed Milk Company wagon galloped toward him.  A witness later testified “While Mr. Breslin was continuing across and as the horses reached 86th Street, they increased their speed and started to ‘gallop’ across 86th Street, and one of the horses swerved in towards the westerly sidewalk and struck Mr. Breslin as he was about to step on the sidewalk.”

Witnesses told police that the wagon driver appeared to be asleep; “his head was bobbing up and down; his chin striking his chest.”  The horses continued down the avenue until finally being stopped by a policeman.

In the meantime, two young men picked Breslin up and laid him on the cellar doors of a nearby drug store.  One of them, Edward J. Carlin, went into the store “and got some medicine which he poured down Mr. Breslin’s throat.”  Breslin died about two minutes afterward.

After Henry Breslin’s body was taken to the 84th Street Station House, it was carried to No. 160 East 92nd Street at around 1:00 in the morning.  With eight children to feed and clothe, and rent to pay, Catherine Breslin was in trouble.

Son Christopher moved back in, apparently to help out financially.  Catherine sued Borden’s for $25,000.  The long matter ended in 1908 when she was awarded $10,000 in damages—a little over a quarter of a million in today’s dollars.

John T. Rosenkrans sold the house to bottler Henry Grenhart the year Henry Breslin died; but the Brelin family continued to live here at least until 1909.  On June 4 that year Christopher Breslin died in the house.

By now the Yorkville neighborhood near the little wooden house was drastically changing. Andrew Carnegie had constructed his 64-room mansion across from Central Park at 91st Street in 1903.  He was soon joined by other wealthy New Yorkers.  In 1913 William Starr Miller completed his lavish mansion at 86th Street and in November that year financier Willard Dickerman Straight purchased the lot at the southwest corner of Fifth Avenue and 94th Street.

Straight paid $300,000 for the lot alone, where he intended to build “a fine residence.”  As his new home rose, he addressed other matters—garaging his vehicles and housing the staff that would not be living in the mansion.

On June 18, 1914 The New York Times reported “Willard D. Straight, who is erecting a fine residence on the northeast corner of Fifth Avenue and Ninety-fourth Street, has purchased the two plots at 160 and 162 East Ninety-second Street, between Lexington and Third Avenues, for improvement with a two-story garage for his use.  Two old frame buildings are now on the property.  The plot at 160 was bought from Henry Grenhart.”

The Straights demolished No. 162 and had the architects of the Fifth Avenue mansion, Delano & Aldrich, replace it with a handsome garage building.  No. 160 was spared and used as living quarters for staff (as were the upper floors of the new garage).

Among those living in the house was Mrs. Anna Daescher.  Her son, Robert, left to fight overseas at the outbreak of World War I.  On October 14, 1918 Private Robert B. Daescher’s name appeared on the list of “Casualties Reported by General Pershing” in The Official U. S. Bulletin.

Willard D. Straight died in 1918.  Following his widow’s remarriage and move to England in 1925 the house was transferred to the Straight Improvement Company, which managed the Straight estate’s real estate holdings.  It was about this time that the original porch posts were replaced with rather incongruous Corinthian columns.

The wooden building continued to house Straight employees; although at least one may have been allowed to stay on after he could no longer work.   On February 12, 1926 79-year old Apsley Samuel Boulding died.  The husband of Francena M. Boulding, his funeral was held in the house at 2:00 on the afternoon of the following Saturday.

Following the sale of the house in 1946 it became home to two notable artists.  Sculptor Robert Berks lived in the house in the 1950s.  He was here in 1956 when his statue of Associate Justice Louis Dembitz Brandies of the United States Supreme Court was unveiled.

No. 160 was later purchased by jewelry designer Jean Schlumberger.  Having begun his career in Paris with Schiaparelli, he became a vice-president of Tiffany.  Schlumberger lived in the house until September of 1976 when he decided to live mainly in Paris and on his Guadeloupe banana plantation.  The New York Times reported on September 23 that year that he “is selling his wooden-frame house at 160 East 92d Street” and “is selling his clock collection and house furnishings at an Oct. 6 auction at the William Doyle Galleries.”

In June 1988 the Landmarks Preservation Commission designated No. 160 East 92nd Street a New York City landmark.  The designation no doubt saved the little house in sito in 1998 when a neighborhood group, Friends of 92d Street, made a startling proposal to the Y.M.H.A.-Y.W.H.A.

The 92d Street Y was proposing a tall building at No. 125 East 92nd Street.  The Friends of 92d Street balked at the project; saying it would be out of character with the 19th century houses in the district.  On January 4, 1998 The New York Times reported “The residents group has come up with its own proposal for the lot.  It wants the Y to buy the historic frame house at 160 East 92d Street, which is next door to the Y on the south side of the street and not in the [Carnegie Hill] historic district, and move it to the vacant lot, which would cost the Y more than $500,000.”

The expensive proposal (which infuriated neighbors of No. 160) was eventually dropped. 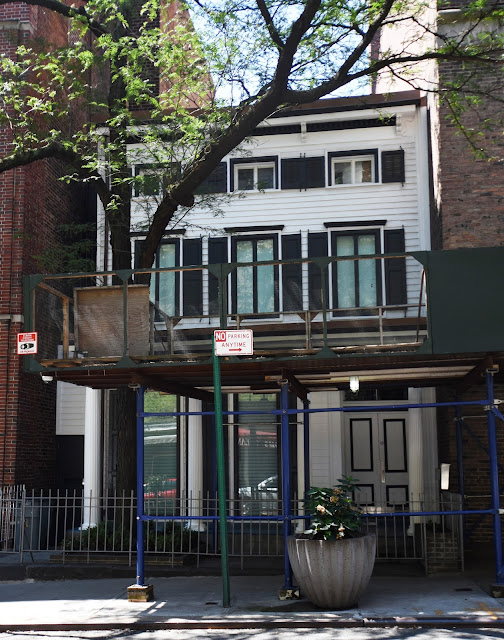 The quaint wooden country-style house with its picturesque front porch is totally unexpected on a block filled mostly with 20th century apartment buildings.  It is one of those miraculous survivors in a city obsessed with tearing things down.