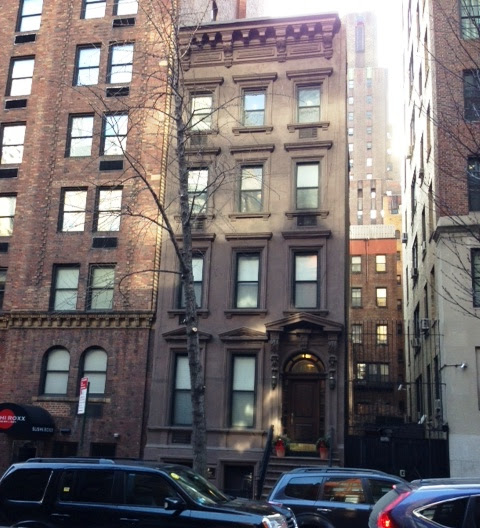 By 1872 the family of Joseph W. Gray lived in the handsome brownstone home at No. 114 East 39th Street, between Lexington and Park Avenues.  Gray was a well-to-do importer, whose office was at No. 179 Broadway.  He and his wife and daughter, Mary, summered in their country home in Utica, New York.  Like all wealthy New Yorkers, they spent time abroad, as well.  On August 10, 1872, for instance, they boarded the steamship Washington for France.

Gray and his wife had a nearly-tragic experience in August of 1881.  Gray was driving his rockaway (a light and low four-wheel carriage) on the way to Yonkers.  As the carriage was traveling south, a newfangled contraption came north—a bicycle.

Joseph Gray later reported “I saw my horses kind of stick up their ears, and I beckoned to the man to keep away; I saw my horses were rather astonished at it; and I slowed them down on a slight trot; however, he didn’t keep back.”

Never having seen a bicycle before, the horses jumped.  Gray and his wife were tossed into a ditch with the carriage on top of them.  Luckily, after the bicyclist continued on his way, not bothering to stop, the horses relaxed.  They stood still, munching on grass.  Their hooves were mere inches from Gray’s head.

It was the last time Mrs. Gray would trust the bays.  “I had to sell them,” Gray said.  “my wife would not ride behind them again.”

In 1888 the 39th Street house became home to the family of Frank Shepard Benson.  Benson had graduated with a law degree from Yale; however he never practiced.  Instead he focused on academic pursuits.  He was a leading member of the Numismatic and Archeological Society of New York, a member of the English Society for Hellenic Studies and of the Historical Society of Long Island.

Before moving in, Benson commissioned the architectural firm of McKim, Mead & White to do interior renovations.  The upgrades cost him $3,000—in the neighborhood of $77,000 today.   The Italianate-style exterior was left intact.

On July 6, 1893 Benson’s father, Arthur W. Benson, died.  In his will he left Frank and his sister, Mary, nearly the entire Montauk Peninsula—10,000 acres.  When Arthur purchased the lane on October 1, 1885, he was given a paper certifying that “since that time the Indians have continually been absent from the Peninsula of Montauk.”

Within a few months of inheriting the land, Frank Sherman Benson formed the Montauk Yacht Club with William L. Andrews, Alfred M. Hoyt, Alfred W. Hoyt and Alexander Orr.  It was officially opened in January 1894.  A year later a train line was extended to the new resort community.

The Native Americans were not happy with their new neighbors.  The Montauk tribe tried to fight Benson but, as pointed out by The Sun, “Indians as a tribe have no standing before our courts.”   And since it was a tribal issue, not an individual one, the issue simmered for years.

Finally in 1906 the Montauk tribe received the legal rights to sue and did so, claiming the deeds to their land were obtained by “fraud or undue influence.”  But Frank S. Benson would not live to see the trial play out.  Now widowed, he died at the age of 52 on February 28, 1907.

Benson had one daughter, the teen-aged Thyrza.  His will gave her “my house and lot now known as No. One Hundred and fourteen (114) East Thirty-ninth (39th) Street, in the Borough of Manhattan City of New York.”  Thyrza also received his portion of the Peninsula of Montauk (which by now held the town of East Hampton) and other properties in Brooklyn.

Thryza Benson moved to fashionable Brooklyn Heights and leased the 39th Street house.  In 1917 Henry Lewis signed a lease.  The family moved in just in time for the marriage of daughter Ethel.  The wedding took place in the house on Saturday, December 22, 1917.  Like many wartime romances; her marriage to Lieutenant Richard E. Dole was small and hurried.  The New York Times reported “The ceremony was witnessed only by the families and a few intimate friends.  Lieutenant Dole is stationed at Camp Upton.”

The following year Thryza, by now Mrs. Montague Flagg, leased the house to John R. O’Mara and his wife, Mary.

In the spring of 1919 it was converted for use by the newly-formed Aviators’ Good Landing Club.  It was formally opened on May 4 by Sir Thomas Lipton.  The Sun explained “Any aviator of any country may apply for membership.  Besides being a club for men of this vicinity it purposes to welcome and entertain men of the aviation service arriving from overseas.”  Dues were $2 a year with a $1 initiation fee.

A society tea was given by the “treasure and trinket committee” to raise funds for the club.  Items made of precious metals were donated to be sold for scrap.  The Sun reported “Donations of treasures and trinkets are requested and from the sale of such articles it is hoped a good sum will be raised.  Anything that is made of gold or silver will be acceptable, such as old thimbles, spoons, bracelets, chains, cigarette cases, coins, useless trinkets, and in fact no broken  bit is too small to be returned to the mint.”

In 1920 the O’Maras purchased No. 114 from Thryza Flagg.  By 1924 the former Aviator’s Good Landing Club had given way to rented rooms.   Among the residents here in 1926 were Sidney J. Levi, described by The Times as “a well-to-do retired wholesale grocer,” and his wife.   The couple was somewhat surprised when Federal agents knocked on the door and arrested Levi on November 9 that year.

Sidney Levi had a history of mental instability and had been committed to a sanitarium in Canandaigua, New York in 1912; later to the McDonald Sanitary in Central Valley; and again to one in Brewster, New York.

Now Levi drew the attention of investigators when he wrote “letters of a vague, rambling and extraordinary nature” to President Calvin Coolidge, Governor Al Smith, District Attorney Banton, U.S. Postmaster Kiley, “and other public officials.”  The letters were generally “not threatening,” according to The Times; however at least one of them said he wanted to “go into partnership in the murdering business.”  Levi suggested to District Attorney Banton that he be appointed a Justice of the Supreme Court.

When questioned by United States Commissioner O’Neill, Levi told him he was immune from prosecution; explaining “he was not a citizen of the United States, as he was born in Schenectady.”

Mrs. Levi provided the $1,000 bail and berated the officials for their interference.  The Times said she “volunteered the suggestion that it was a shame to molest her husband when there were so many criminals at large.”

For the next half century the once-upscale home was operated as 19 furnished rooms.  The New York Ceramics Studios occupied the basement level in the 1930s; holding a show here in December 1935.

In 1973 a conversion resulted in three apartments each in the basement through 2nd floors; and two each on the upper stories. 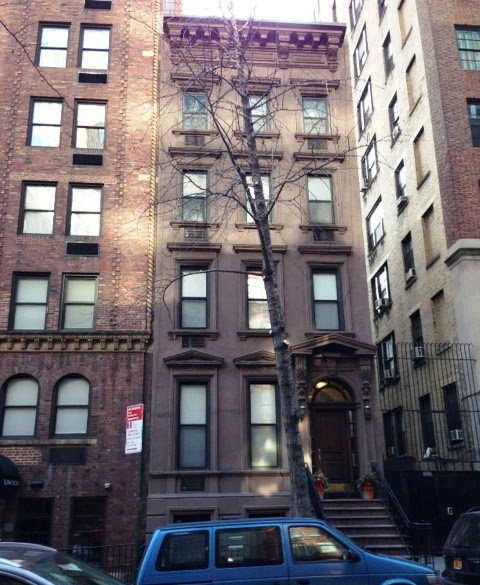 Today the Pajama Program (an organization which provides new pajamas and books to needy children) operates from the basement level.  No. 114 is the sole survivor of the long row townhouses; making it still possible to imagine East 39th Street when handsome carriages waited for moneyed residents to descent the brownstone stoops.