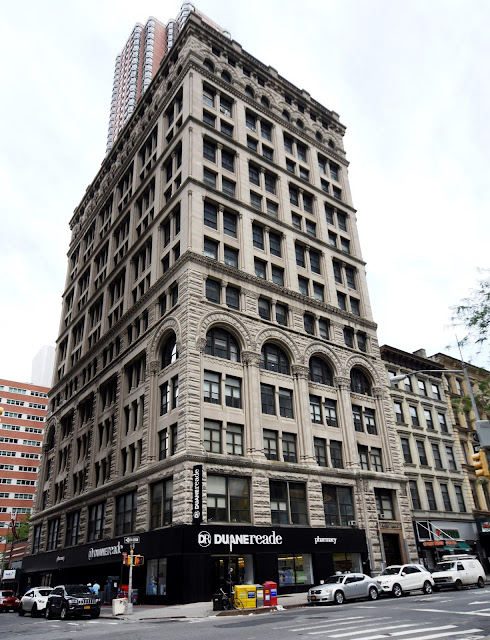 On January 16, 1893 the Real Estate Record & Builders’ Guide reported “we find a forty years’ lease consummated…for the Weld estate of Boston, who have invested so largely in New York real estate.  This corner of Broadway and Duane street, the northwest, is to be improved by the erection of a large office building, and it will be rented to a life insurance association.”

A separate article that day announced “The Weld estate will tear down the one-story buildings now on the corner and erect on the site one of the finest ten-story, fire-proof office and banking buildings in the city.

William F. Weld had been among the country’s most prosperous shipbuilders and merchant shipping tycoons.  He was also involved in railroad construction.  But following his retirement in 1861 he devoted his energies to real estate development in Boston and New York.  His will directed his trustees to continue his real estate business.  The development of the Broadway-Duane Street property by his four grandchildren, “The Weld Estate,” had been in process for years by the time of the Record & Guides’ announcement.

The Estate purchased the property in May 1888 at a cost of $350,000.  It would be four years before the project began taking shape.  The Mutual Reserve Fund Life Association, founded in 1881, entered into negotiations with the Estate to construct its impressive headquarters.   Architect William H. Hume filed plans in June 1892, estimating the cost of the structure at $730,000—nearly $2 million in 2016.  The choice of architects was no doubt influenced by Hume’s seat on the Board of Directors of the Mutual Reserve Fund Life Association.

A month earlier the Record & Guide had updated its readers.  “On the northwest corner of Duane street the buildings are in process of removal, preparatory to the erection by the Weld estate…of a fire-proof office building…It is to be a thirteen-story and high basement—substantially a fourteen-story building, with cellar.  The first two story [sic] are to be of granite and the rest of Indiana limestone.”

In the pioneering days of skyscraper construction, Hume’s Mutual Reserve Building was on the forefront.  Hidden behind the heavy masonry was a steel cage framework.  Frederick H. Kindl, chief engineer of Carnegie Steel Company, advised “this method of construction…has only of late been introduced.”

In January 1894 the Mutual Reserve Fund Life Association updated its shareholders, saying the building “will within another month, be about completed” and promised it would be “one of the most substantial buildings ever erected in this or any other city.”  The report announced that the first floor retail areas had already been rented at $30,000 per year and around $75,000 in yearly rents on upper floors had been procured.  (Among those tenants who signed leases during construction was “The Arkwright Club of dry goods men” who took a 10-year lease on the 13th floor at $9,000 per year.)

The January report was a bit optimistic about the completion date.  Dedication ceremonies were held on June14, 1894; but the building was not officially completed until September.  According to the New-York Tribune the final construction costs had risen to “about $1,200,000.”

Hume had taken the stocky Romanesque Revival style of Henry Hobson Richardson to skyscraper proportions.   The two-story base of rough-cut granite and limestone featured large entrance arches on Broadway—one for the retail spaces and the other for the lobby to the upper floors.  Heavy medieval carvings and bold arches reflected the style; its visual weight broken by slightly projecting cornices at every two of the upper floors. 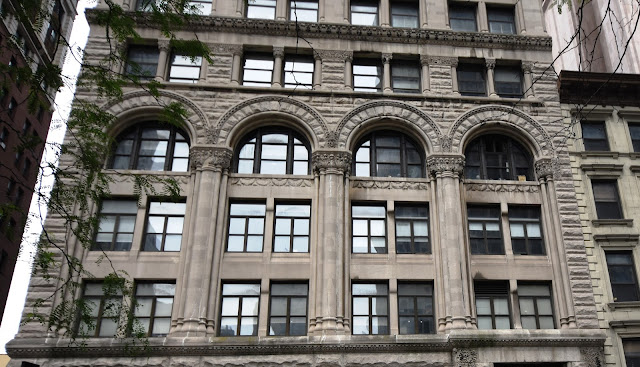 The New-York Tribune commented “Founded upon bedrock, it rises two hundred feet above the sidewalk, but great as its height, so perfectly is it proportioned and so admirable in its architectural treatment of its two facades, that few careful observers would dream that it attended such an altitude.  Entering the building by a doorway of unusual grace of outline…the visitor finds himself in a spacious and lofty vestibule lined with African marble.”

Among the first tenants was contractor Richard Deeves & Son—the builders of the Mutual Reserve Building.  The firm would remain in the structure they erected at least through 1914.

One of the retail spaces became home to the bicycle showroom of the “Fowler wheel.”  The New York Times reported on January 6, 1896, “The Metropolitan branch of this hustling concern is managed by James H. Robley.  The 1896 models can be seen in the salesroom in the Mutual Reserve Building.”

The building boasted four Otis & Brother elevators “of the most improved type,” according to the New-York Tribune on December 24, 1898.  But safety engineering did not keep pace with the up-to-date technology.  Because the expandable gates could be opened whether the elevator cab was on the floor or not, high rise buildings were repeatedly the scenes of elevator-related deaths; including that of William B. Cunningham in the Mutual Reserve Building on July 21, 1904.

The 50-year old dealer in burlap and jute yarns was also a member of the Arkwright Club.  He left his office in the building that afternoon, headed home to New Jersey.  “It is supposed that while the elevator car was above him, Mr. Cunningham opened the gate on his floor, looked up for the car, and lost his balance.”  He plummeted nine floors to his death.

When a similar death occurred in the Continental Building one week later a reader wrote to the Editor of The Sun complaining “These cars (frequently running at high speed and to great heights) are a constant danger.  They are often operated by young or apparently inexperienced persons…Is it not perfectly practical to have attached to every car a device, working automatically, whereby the driving power cannot be applied until the door is closed and fastened?”

One tenant who would remain in the building for several years beginning around 1905 was Hapgoods, an employment and “business opportunity” agency.  The firm touted itself as a “National Organization of Brain Brokers.”  In January 1906 it advertised a variety of opportunities in The Business World.  Among them were “a controlling interest in a general jobbing machine business” for $3,000 to $5,000; a one-third interest in “a growing concern manufacturing electrical specialties” for $7,000; and “a substantial interest in a Cleveland, Ohio” firm to represent “and install their system of vacuum cleaning.”

The agency also published the newsletter Opportunities.  On August 4, 1906 an advertisement said the flier contained “descriptions of high grade positions now open for Salesmen, Executives, Clerical and Technical men: salaries $1,000-$5,000.  It is free for the asking.”

The first signs of problems for the Mutual Reserve Fund Life Association came in 1900 after the Superintendent of Insurance initiated “an examination of the officers of this association” regarding corruption.  James R. Maclay applied to the State Attorney General to have Frederick A. Burnham removed as President.  The application was denied on November 23, 1900.  But problems were far from over.

A Board of Director’s meeting on January 16, 1907 resulted in a New-York Tribune headline “Burnham Tightens Grip” and a report that the attempts to “oust President Burnham and Vice-President Eldridge,” had failed.  “Both these men are under indictment.”  Nevertheless, by June Burnham was out, facing five counts of grand larceny and forgery.

The Mutual Reserve was on shaky financial ground.  The Tribune reported on a move made by the Directors which was both economical and symbolic.  On June 12 the newspaper reported “it was learned that the Mutual Reserve has decided to close the president’s private elevator.  For many years, as in several other insurance headquarters buildings in Manhattan, the Mutual reserve has been equipped with a private elevator running from the first to the fifth floor and reserved for the use of the president and the principal officers of the company.”

The Directors explained that “by closing it down the company might at least save the annual wages of an elevator man, the cost of lighting, etc.”

Although the Mutual Reserve Life Insurance Co. renewed its lease in 1908 at $60,000 per year; the end was near.  The firm was placed under receivership and filed for bankruptcy the same year.  Further scandal came on December 23 when Frederick A. Burnham, faced with $300,000 in law suits by the receivers of the Mutual Reserve Life Insurance Co., was found dead in his bed, overcome by gas.   Initial reports deemed his death “probably suicide.”

Earlier that year another tragedy occurred in the Mutual Reserve Building.  In a near repeat of the elevator shaft incident of four years earlier, 45-year old delicatessen owner August Does fell nine stories to his death on August 11, 1908.  He had an appointment with his lawyer, Harold C. Knoppel, on the ninth floor.

When the car reached that floor, several men got off, but Does remained in the back of the car.  The elevator operator, Francis Eunis, started to close the door.  The Sun reported “About ten feet above the ninth floor Does apparently realized that he had gone beyond his floor.  Before Eunis could stop him Does made a jump to get out of the car and through the gate.  The car shot up and he fell down the shaft.”

The newspaper added “The cries of Does as he fell could be heard throughout the building and there was some excitement.”  Rather startlingly, Francis Eunis was arrested and charged with the man’s death.

By 1910 the address was known as the Langdon Building.  The varied list of tenants included the publication office of the Patent and Trade-Mark Review (it had moved in in 1902); the offices of the Miller Bros. Cutlery Co., “makers of steel pens and erasers,” on the third floor; and the architect Max Silverstein.  Another architectural firm, Baggott & Ryall, would be in the building by 1915.

In April 1914 the Standard Lunch Company took the Duane Street stores at Nos. 95-97 “for a long term of years.”   The cafeteria would be joined the following year in June by the Emerson Shoe Company, which opened its shoe store at No. 307 Broadway.

In February 1920 the Broadway-John Street Corporation purchased the Langdon Building for $2 million.  The new owners announced their intentions of leasing to legal firms.  The Sun noted “If the lawyers who are said to be coming to the Langdon Building are leaders in the legal profession the move will have the affect of bringing the law business back to an old stand, that surrounding the courts in Chambers Street.”

The group wasted little time.  On February 6, 1920 an advertisement appeared in The Sun and in the New York Herald offering “Lawyers’ Opportunity to secure office space in a House of Character.”  The ad pointed out that the Langdon Building was “located near the new Court House.”

Nevertheless, contracting and architectural firms continued to seek space in the building.  In 1922 the Marcus Contracting Company was in the building, as was George F. Hardy, “mill architect and consulting engineer.”  Hardy specialized in the design of “paper, pulp and fibre mills.”

In 1923 architects Schwarts & Gross were commissioned to remove the central arched entrance on Broadway.  Subsequently the remaining arched entrance was converted to a less dramatic squared-off opening.

Throughout the rest of the century the building saw a long list of owners and tenants.  Along with the large number of law offices, the structure would be come to metals dealer Herman J. Heght, Inc., the cumbersomely-named Lithographers International Protective and Beneficial Association of the United States and Canada, the Jewish Forum Association (publishers of The Jewish Forum), and it would be the first long-term headquarters of the Landmarks Preservation Commission (from 1967 through 1980).

Despite the regrettable loss of the ground floor and the entrances, Hume’s masterful Romanesque Mutual Reserve Building is a remarkable survivor of the early days of skyscraper development.