The Stubborn Hold Out at No. 6 Stone Street 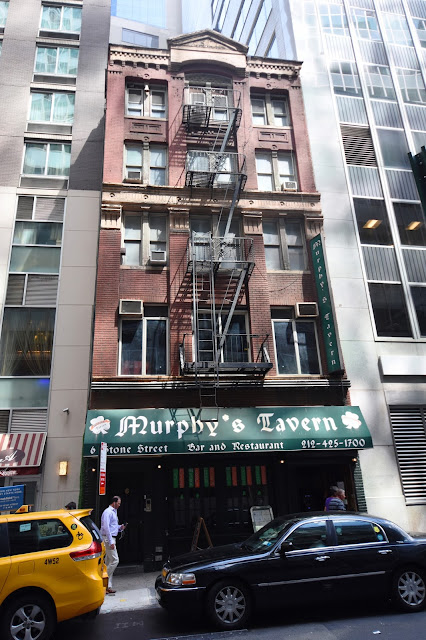 In the 17th century Oloff Stevensen van Cortlandt’s brewery had lent its name to Brouwer (or “brewery”) Street.  But the dust stirred up by the hooves of the brewery’s wagon horses settled on the costly furniture and sullied the curtains in the neighboring houses. Cortlandt’s own wife led a delegation of infuriated housewives who demanded that the city pave the street.  In 1658 it became the first paved street in the city and was renamed Stone Street for its cobblestone surface.

The block long thoroughfare was still residential a century later.  In 1795 No. 6 Stone Street was home to Joseph Fay and his wife, Elizabeth (who was the daughter of Samuel Broome).  But by the first year of the Civil War, moneyed families had moved north, away from the businesses that crowded lower Manhattan as New York City continued to grow.  In 1861 the “vacant house” at No. 6 Stone Street was offered at $1,800 a year rent—about $4,000 per month in 2016 dollars.

Although the house survived at least until 1869; it was soon replaced by a five-story brick warehouse.  Owned by the Emigrants’ Industrial Savings Bank, the building suffered significant damaged in a fire late in 1879.  The bank commissioned the well-known architect William H. Hume to repair the burnt structure.  His $3,500 repairs put the building in shape for the bank to sell.

Shortly after the reparations were completed, Nicholas and Eliza A. Murphy purchased No. 6 for $15,000—in the neighborhood of $360,000 today.  The Murphys had grander plans for No. 6 Stone Street than a warehouse.  Within a year and a half of the purchase they hired A. Hatfield to design a “new front” and “ironwork” as reflected in his plans, filed in May 1882.  The renovations cost the Murphys $16,000—more than they had paid for the property—and resulted in a modern store and office building.

Hatfield’s tripartite design was faced in red brick and trimmed in limestone.  Above the ground floor storefront (created specifically for a restaurant), the two-story upper sections were separated by a heavy stone frieze.  The second and third floors were distinguished by brick piers capped with stylized stone capitals; while the top section featured a stone cornice and triangular pediment. 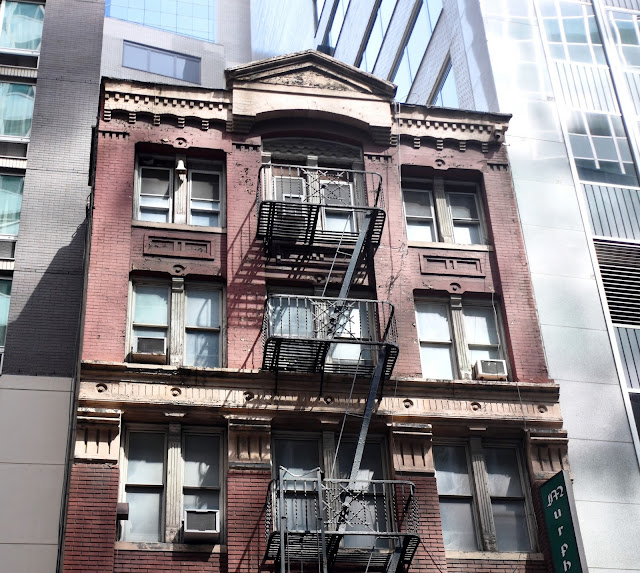 Only six years later, in June 1888, Eliza A. Murphy commissioned architect J. M. Dunn to modernize the interior.  Walls and offices were reconfigured, costing the Murphys $4,500.  It was possibly at this time that the upper floors were converted to residential space—an early precursor to the trend that would overtake lower Manhattan in the 21st century.

Meanwhile, the former restaurant space was home to London & Martin in1912; and to John F. McClunn’s stationery store, McClunn & Co. in 1917.  Although McClunn’s lease was for “a long term,” according to newspapers, he moved to Broadway before January 1920 when the estate of Eliza A. Murphy leased the entire building to the National Lunch Company.

The Real Estate Record & Builders’ Guide noted the building was “now occupied as store and apartments” and that the National Lunch Company intended to “remodel the property for offices and salesrooms, having it ready for occupancy about May 1, 1920.”

The renovations apparently took longer than was hoped; but by November 1920 the building was fully leased.  According to the New York Herald on November 1, the new tenants were “J. S. Waterman & Co., Theodore Moss & Co., Caballero & Carvajal, and the New York Signal Trading Company.”

Other tenants in the 1920s were the Molasses Products Company, Inc., which took space in 1922; and the photograph gallery of Samuel Lander by 1924.  Lander was just 18 years old that year, when the teen-aged entrepreneur found himself in serious trouble.

Samuel Lander not only exhibited photographs in his gallery, but he used the space for partying.  His problems came when two 15-year old Brooklyn girls, Lillian Goodson and Anna Willinger, reported to authorities on what was going on there.

The New York Times described the girls on March 22, 1924 saying “Both are large for their ages and wear their hair bobbed.”  The girls shocked the Society for the Prevention of Cruelty to Children, where they were taken, with their accounts of the being taken advantage of by five males and having their morals impaired during “parties…in a photograph gallery conducted by Samuel Lander.”

Landau had been arrested the night before along with another teen, 16-year old Samuel Silverman, and three adults.  The respected men were humiliated when their names and professions were published. "Dr. Adolf Stone, 42, a dentist, of 611 West 110th Street, and Abraham Bimberg, 29, of 103 Ditmas Avenue, Brooklyn, who is married and the father of four children,” and 34-year old David Don who lived in the Bronx.

On April 5 the girls appeared in court and testified against the men before Magistrate Moses R. Ryttenberg.    While the judge held Samuel Lander on $5,000 bail and the others on $500 bail; he was not altogether sympathetic with the bobbed haired girls who had repeatedly returned to the parties on Stone Street.  The Times noted “Magistrate Ryttenberg denounced them as ‘two of the most brazen witnesses’ he ever had heard.”

On June 20, 1929 the Utilities Building Corporation happily announced that after a year of negotiations it had finally assembled a full blockfront building site “on Broad Street from Stone to Bridge Street,” including No. 6 Stone Street.  But the developer’s announcement was premature.

No. 6 Stone Street was still owned by the Murphy family, which was not ready to give up the property.  They retained ownership into the 1930s, as least, and construction projects on Stone Street would not include the 25-foot wide property.

In 1947 41-year old John H. Powers set up his office in the building.  He had held the position of Assistant Port Captain for Cities Service Oil Company from 1938 to 1944.  Now he devised a money-making scheme that took advantage of naïve Puerto Ricans looking for jobs on ships.

The Coast Guard issued certificates to applicants who brought with them a letter of employment.  The certificates authorized the men to work on ships; but were issued only after they had been hired.  Seeing an opportunity, Powers hired a “runner” who stationed himself outside the Coast Guard office.  When applicants were rejected because they had not yet been employed, the runner directed them to “see the captain at 6 Stone Store,” according to John J. Donovan, Jr., Assistant United States Attorney later.

There, John Powers would write a letters of introduction, stating that the men had been hired by the Cities Service Oil Company.  The scheme lasted only a few months.  He was arrested by the FBI on July 23, 1947 for “having aided in the furnishing of false statements to a Government agency, the Coast Guard.”

Donovan told reporters that “the arrest had ended a racket in which inexperienced Puerto Ricans seeking jobs on ships had paid $20 to $25 for false letters enabling them to obtain seamen’s certificates from the Coast Guard.”

In 1949 the headquarters of the Marine Cooks and Stewards Union was in No. 6 Stone Street.  The little winding block was crammed with more than 400 seamen on April 11 that year.  The sailors were protesting the union’s refusal to deny jobs to cooks with Communist leanings.  Steve Cardullo, a representative of the Sailors Union of the Pacific, complained to reporters that “all seagoing unions had expelled their Communist members, except the cooks.”

The cooks’ union stood firm.  “The Marine Cooks and Stewards has never at any time interfered with the jurisdiction of any other union, and we don’t intend to in the future,” replied one official.

Another marine-related union in the building by 1952 was the Staff Officers Association of America, an affiliate of Seafarers International Union, A. F. L.   The association recognized a serious need for trained pharmacists on board American cargo vessels.  In February that year an official complained of the Government’s failure to reopen its sea-going pharmaceutical school following the war.

Tom Hill said that as a result “American seamen on cargo ships have no guarantee of adequate emergency medical care at sea.”  In response, the union opened its own school in the Stone Street building.  The New York Times noted “The Government has contributed to the school to the extent of providing textbooks, and steamship companies, with which the union has contracts, have provided the types of forms used in connection with their particular type of operations.” 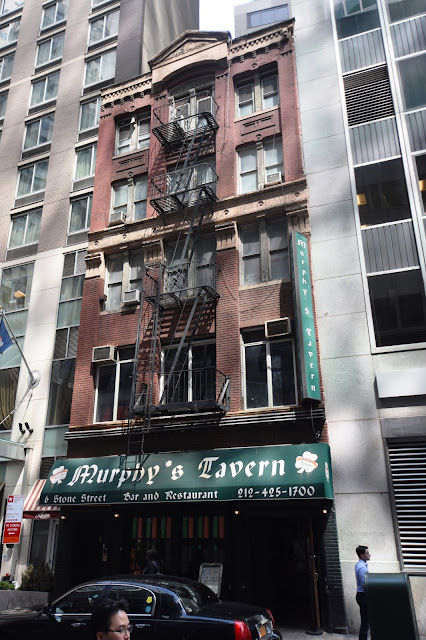 Today the much-altered ground floor is home, appropriately, to Murphy’s Tavern.  Nicholas and Eliza Murphy’s handsome building, looking much as it did when they revamped it in 1882, is squashed between soaring office towers—an out-of-place 19th century holdover among glass and steel.