Captain Richard Towning had a successful career in the West Indian slave trade.  When he retired from the sea, Captain Towning purchased the trapezoidal-shaped tract bounded by West 12th Street, Jane Street, Hudson Street and Eighth Avenue.
Towning died in 1843 and two years later his executors began liquidating the undeveloped land.  Stephen Kane, a sashmaker, lived about a block and a half to the north, at No. 652 Hudson Street.  He purchased at least two of the lots, Nos. 628 and 630 Hudson Street as speculative investments.  In 1846 he built a handsome brick-faced house at No. 628, and the following year began construction on a slightly taller, four story house next door.

For the second project Kane obviously worked closely with the Towning Estate, which simultaneously constructed a house at No. 632.  The completed structures were identical.  Face in red brick, each was three bays wide and featured simple brownstone sills and molded cornices above each window.  Most likely each had a store at street level from their inception.

When “the Rebellion” broke out in the South, Norval left his Hudson Street practice to become Surgeon of the 79th Regiment, known familiarly as the Highlanders.  The New York Times wrote that the doctor, “who has charge of the hospital department, applied himself day and night, with his staff of assistants, to the care of these men.”

In December 1862 Dr. Norval sent word back to New York with a somewhat surprising request.  He said that he had “abundant medical supplies” but felt “greatly the want of entertaining and instructive books for the use of the convalescents.”  The doctor asked New Yorkers, especially publishers, to help establish a “hospital library.”

Wording his entreaty as only a Victorian gentleman could, he said “The inanity of mind attendant upon this condition cannot be more readily relieved than by reading works of a narrative humorous or historical nature.”

At street level was a variety store.  The owner placed an advertisement in the New York Herald on May 20, 1865 offering “For Sale—Confectionery, Toy and Fancy Store; old established stand.”  The proprietor hinted that the sale had nothing to do with a bad location or poor business.  “Good reason for selling.”

The new owner of the store, Ferdinand Harteze, found himself in trouble with the law on Sunday April 21, 1867.  Two policemen, Officers Sands and Blackwood, made a surprise visit to the basement around 4:00 that afternoon.  The New York Times reported that there “they found a party of three men playing cards for money with the proprietor of the place.”  Harteze and the other men were arrested and spent the night at the 9th Precinct Station House.

In the meantime, the house next door at No. 632 had been operated as a boarding house at least by 1855.  The blue collar residents included Augustus J. Reilly and L. S. Vandermark, both of whom worked as “cartmen,” and Henry J. West, a clerk.  All three men were also volunteer firefighters; somewhat surprisingly at three different fire houses.

In 1856 No. 632 was valued by the New York State Insurance Commissioners at $5,500 (about $160,000 in 2016).   The tradition of volunteer firefighters continued as the residents changed.  In 1859 Edward Eaton, John Kavana and Louis M. Sturtevant—all carpenters—were living here and volunteering.  They too were assigned to three different fire houses.

On Thursday, May 21, 1874 Dr. James Norval died at the age of 51.  His funeral at 1:00 the following Sunday took place at No. 630 Hudson Street.  His dedication during the Civil War had not been forgotten.  The funeral included a parade of the soldiers of the 79th Regiment and a military escort to Greenwood Cemetery.  Newspapers reported that he was buried with “military and Masonic honors.”

During the last week of January 1881 Hugh King purchased both buildings at No. 630 and 632 for $23,650.  King was in the wholesale grocery business and owned other properties in Manhattan.  Within two months he filed plans for alterations, including a one-story brick extension to the rear, a new roof, and “front basement and first-story all taken out and iron supports, columns, girders &c., inserted.”  The $6,000 in alterations would include a new cornice, the parapet of which announced “HUGH KING & Co. 1881.”

Initially Hugh King & Co. occupied the now-combined buildings, listed as “grocers” in 1883 and “provisions” in 1886.

In July 1888 a “handsome, gentlemanly” man named Altamont B. King entered the butcher shop of Charles A. Brown, just steps away a No. 636 Hudson Street.  Explaining to Brown that he was Hugh King’s nephew, he presented a $45 dollar check which butcher cashed.

The 28-year old, however, was not King’s nephew and, in fact, was not even named King.  The Evening World later remarked that he “says he is a Buffalo man and has another and better name [and] is apparently an accomplished forger.”

After several other similar scams the man “of a first-rate family” was arrested.  But his conviction almost did not come to be.  The Evening World reported that on September 5 he “created a sensation…by deserting Deputy-Sheriff James Reilly on the way from the brown-stone Court-House to the Tombs and running away to New Jersey.”

Although the forger pleaded guilty only to the Hugh King crime; when he was arraigned on September 25 his fate looked grim.  “He may be sent to Sing Sing for from five to ten years on the one count,” reported The World. 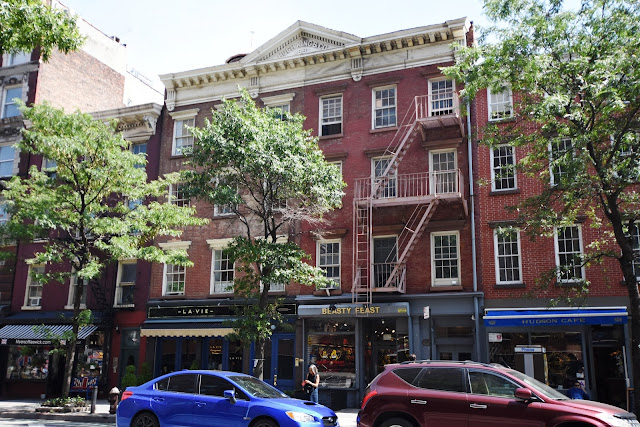 Like Hugh King, Edward Rafter was a grocer and property owner.   He started business in 1863 and by the time that “Altamont B. King” was arrested, owned eight tenement buildings and several retail grocery stores.  When investigators checked the building at Nos. 343 and 345 East 11th Street, they were shocked.  The street level shops included a baker and a fisher seller.  The investigators found that the baker used water from the basement sink for his bread; while the fish monger washed his fish in that sink.  More disturbing was that the 16 families in the building “used the sink as a urinal.”

Threatened with legal action, Rafter said that correcting the problem was impossible.  “What steps can I take?” he asked.  “It is a very hard matter to take charge of all the tenants in the house.”

By 1903 Hugh King had leased Nos. 630-632 Hudson Street to Rafter, who used it as his liquor and grocery warehouse.  Despite the conditions in his tenements, the New-York Tribune had nothing but praise for his provisions business.

On August 2, 1903 the Tribune wrote “Buying for all of his nine stores in quantity at wholesale, and selling cheaply, his goods go quickly, and are therefore always fresh.  In his great storehouse at No. 630 Hudson-st, New-York City, these goods are gathered, and from it distributed to his several retail establishments."  Rafter’s slogan was “Purest goods, lowest prices.”

Edward Rafter used the combined buildings as his warehouse through 1908.  In July 1909 Hugh King leased them to the Consumers Liquor Dealers’ Association for five years.  The new tenants subleased part of the space.  In 1913 Buttlar Mills, a wholesale coffee and tea dealer, was in the building; and by 1919 F. m. Gertzen Company offered storage for “merchandise in transit through the Port of New York.”

Jefferson Candy Company operated from No. 632 Hudson Street in the early 1920s.  The firm provided boxed candy for promotional sales by groups like the Boy Scouts of America and promised “Candy is the easiest thing you can sell.  Everybody buys it.  We have package candy from 5c to $1.00.”

In the 1930s the building was home to companies as diverse as the Michelson Tire Company and the Kremer Plantations Fruit Concentrates.  Then, in 1942 after ownership of more than 60 years, the High King estate sold the building.  The new owners, the Esteve family, opened a candy factory in No. 632; converting it for making sausages in the 1950s.

The Esteves closed the business in 1983; but held on to the Hudson Street property.  It sat unused for a decade until after Maria Esteve’s death in March 1993 at the age of 97.  A few months later the family sold it to real estate agent and actress Karen Lashinsky and her mother, Dr. Bertha Lashinsky, for just under $500,000.  The women announced their intentions of converting half of the building, No. 632, into a two massive apartments—one on the second floor and one engulfing the rest of the upper stories.

The third and fourth floors were gutted to create a 40-foot atrium with a staircase, the railings of which had been rescued from an Upper East Side hotel.  A set designer recreated a Renaissance ceiling with fluttering cherubs.

The building earned its place in the spotlight when it was used as the set for season 10 of The Real World in 2001.  By then the owners were also leasing it as a location and entertainment venue, “632 on Hudson.”

In April 2015 the building was purchased by 630 Hudson L.L.C. for $6.6 million.  The Lashinskys’ transformation of No. 632 resulted in a peculiar split personality outside.   With the old paint removed from the brick, the ghost of Edward Rafter’s turn of the century sign can still be seen at No. 632.  Meanwhile, the remaining paint on No. 630 creates a distinct line of separation and the old 20th century fire escapes still cling to its walls.

Otherwise, the exterior is little changed since Hugh King transformed the buildings in 1881.  Even the 19th century storefronts survive relatively intact.

many thanks to ready Matt Kess for suggesting this post
photographs by the author
Posted by Tom Miller at 3:15 AM