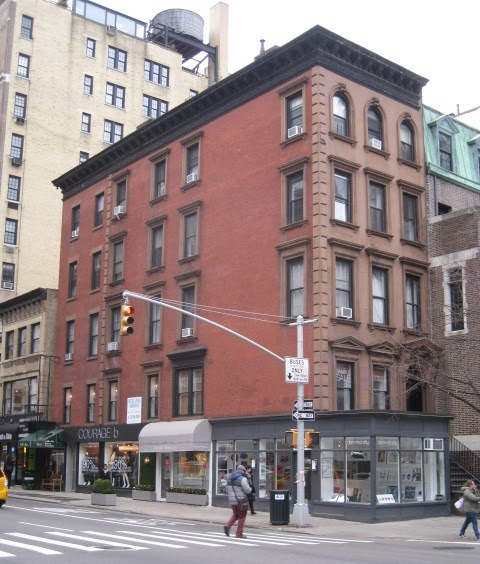 The end of the Civil War triggered a resurgence in building in Manhattan, partly due to the return of the workforce that had been fighting in the South.  In 1869 developers R. & J. Cunningham completed a row of five upscale brownstone homes on East 70th Street.

The most desirable of architect John Sexton's Italianate row was No. 136, because of its location at the southwest corner of Lexington Avenue.  The corner site afforded windows on the eastern side, admitting light and breezes. 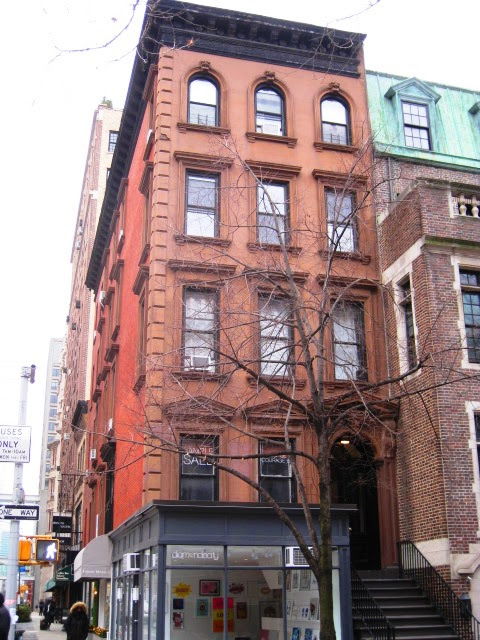 Four stories tall above a high English basement, the front of the house was clad in brownstone while the avenue elevation was warm red brick.  Sexton’s attention to architectural details was evidenced by the stone quoins that joined the brick and brownstone facades, the paneled lintels of the parlor level, and the handsome arched openings of the top floor.

No. 136 became home to another real estate developer, John Muller.  Unlike R. & J. Cunningham, Muller focused on the tenement districts of downtown.  In 1870, the year No. 136 was completed, he was constructing a five-story tenement building on Stanton Street, for instance.  And in 1874 he was working on three five-story brick combination store and tenement buildings on Elizabeth Street.

In December 1884 William S. Thorn and his wife, Carrie, purchased the residence.  They spent $18,500 on their new home, in the neighborhood of $450,000 today.   Thorn was president of the Second Avenue Railroad Company.
Owners of fashionable dwellings required a household staff and Carrie A. Thorn was quite specific in her needs.  On August 14, 1890 she advertised for “a competent German or Swedish girl for general housework.”

On February 8, 1883, almost a year before the Thorns moved into their new home, 24-year old William S. Thorn, Jr. had married Josie Dingee of Brooklyn.  By 1894 the couple had two children.  He had risen to the position of President of the Red Star Manufacturing Company, and was a partner in the lubricating oil firm of Dingall & Co.

Trouble came in 1894 when both William Thorn, Sr. and Jr. suffered illnesses.   The elder man’s condition forced him to resign from the railroad that year, and by autumn it was considered “serious.”  The Evening World was blunt, saying “The senior Thorne [sic] it is said, is lying close to death’s door.”

According to that newspaper, William Junior’s ongoing health issues were “the result of worry over business complications.  The worriment, it is said, preyed so heavily upon Mr. Thorne [sic] that his health had been undermined.”  His despondency grew to the point that he left his Brooklyn house and family, and moved into his parents’ much quieter East 70th Street home on October 6.

The near morning, Sunday October 7, he appeared at breakfast and seemed “more cheerful than usual,” according to the family.  At around 10:00 he went upstairs to his room.  When he had not been heard from by 4:00 he was checked on.   William Thorn, Jr., was dead, having “sent a bullet crashing through his brain,” according to The World.

The New York Times mentioned William Thorn, Sr.’s condition.  “It is feared that when he learns of his son’s death the shock may end his life also.”

On April 7, 1896 No. 136 was sold at auction.  Henry Neckersheimer placed the winning bid of $25,100.  He quickly resold it to architect Gerard Fountain who took advantage of the advantageous Lexington Avenue location by extending the structure into the rear garden to accommodate ground floor stores and apartments above.

Living in the main portion of the structure at the turn of the century was the John H. Meyer family.  On May 21, 1900 daughter Gertrude Attracta Meyer was married to Ambrose Stolzenberger, Jr. in what the New-York Tribune deemed “a pretty wedding.”  The newspaper reported “The ceremony over, a wedding supper was served at the home of the bride’s parents…after which the happy couple started on an extended tour.”

Fountain sold the property in 1903 to Dr. Charles Ignatius Proben and his wife, the former Josephine Ulrich.   Proben was a specialist in diseases of children and in gynecology.

The Probens shared the house with renters, including publisher and playwright William Harlowe Briggs and his wife, Berta.   The Briggs had been married in 1913, six years after William had been appointed associate editor of Harper’s Bazaar.  He was later made book editor of Harper & Bros.  In 1915 his play Behold Thy Wife was produced in New York.

When war broke out in Europe, Briggs put his career on hold and left East 70th Street to join the army.  In 1916 he was a private at the Federal Military Training Camp of the Eighth Training Regiment.

Charles and Josephine Proben continued to rent the rear portion of their large home.  Concert oboist Albert Marsh lived in the house from about 1918 to 1922.  He taught in his studio here during that time.   And in January of 1925 Cornell graduate Thomas Louden and his wife, the former Elizabeth H. Valentine moved in.

Josephine B. Proben, now widowed, died in 1946 having owned the 70th Street house for more than four decades. 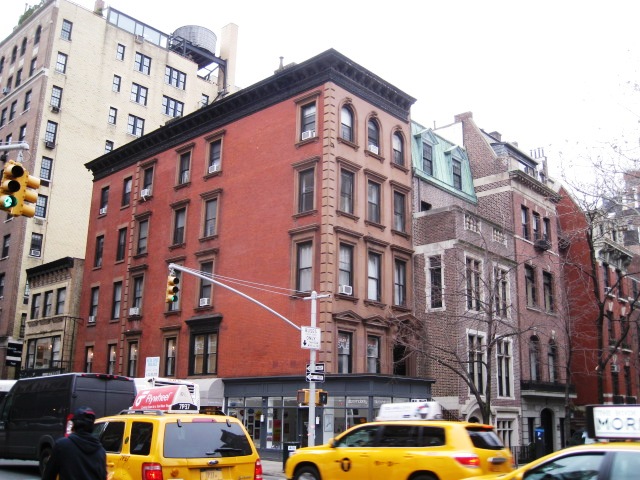 Over time the store space in the southern extension spread throughout the entire Lexington Avenue span, culminating in a storefront addition at the corner.  Yet, rather surprisingly, the post-Civil War residence remains little changed on the floors above.