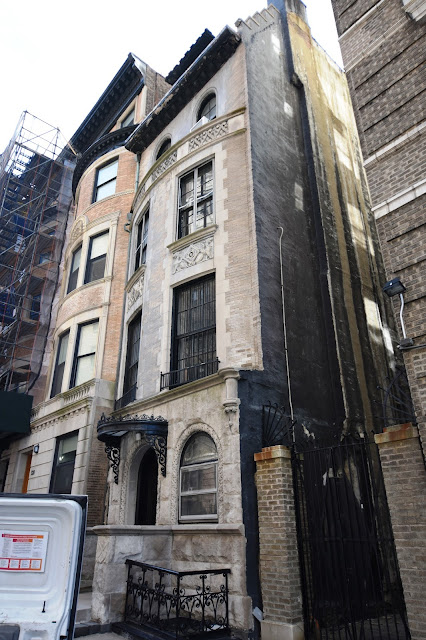 In 1891 Frederick Wright Trippe had successfully recovered from earlier financial problems.  A pharmacist, the New-York Tribune said he “was at one time wealthy.  He had a large establishment on the East Side, but was unfortunate in business matters.”  His son, Joseph was a member of the rubber goods manufacturing firm Jay & Co.  He re-established his father in a drugstore in the Taylor Building at No. 70 Park Place.  “It proved to be a good investment,” said the newspaper.  “His trade was in the nature of retail traffic at wholesale prices.”

The Taylor Building was filled with manufacturing and printing concerns and Trippe’s drugstore shared the first floor with a restaurant.   Around noon on Saturday, August 22 the factories were buzzing with employees and the restaurant was filled with approximately 60 patrons.  Suddenly there was a tremendous explosion.

Frederick Trippe had difficulty obtaining insurance on his store because he stored barrels of the flammable liquid benzene in the cellar.  Whether or not the benzene and 15 carboys of ammonia below Trippe’s pharmacy were responsible for the blast was unclear.  But within seconds the Taylor Building collapsed, burying scores of people under tons of rubble.

Among the fatalities was Frederick Trippe.  Five days later his funeral took place in his house at No. 128 West 71st Street.

The troubles of the pharmacist’s widow, Mary L. Trippe, increased when the Provident Friend Society refused to pay his $5,000 life insurance benefits.  The firm alleged “that he changed his occupation without informing it.”   It would take a year of legal battling before Mary was finally awarded $5,239 in the Albany Court of Appeals on November 27, 1893.

A few months later architect and developer Clarence True began construction on a narrow rowhouse at No. 322 West 78th Street.   Completed in January 1895, it was a fairytale fantasy in brick and stone.  Renaissance-inspired carvings, a gently-bowed front, a charming dormer in the mansard roof, and a glass-and-iron entrance hood created a charismatic residence only 15-feet wide.

In December 1895 Clarence married and the newlyweds remained in the house.  On December 27 Mary hosted a reception from 4 to 6:00 “in honor of her son, Charles Trippe, and his bride.”

Mary appears to have overspent on her new house.  When, on August 2, 1900 she transferred title to Charles, the unpaid mortgage had increased to $22,500.  A month later Charles transferred the property to his wife, Lucy.

The buyer was lawyer E. J. Meyers and his wife, Bertha.   As was often the case with well-to-do couples, Meyers quietly made the money while Bertha’s name appeared in the society columns.  She was active in admirable causes like the Washington Heights Hospital Auxiliary.  In 1914 she was a member of the Hospital for Deformities and Joint Diseases; a designation that accompanied her $5 donation.

The Meyers remained in the house until 1920.  In 1923 it was purchased by Louis J. Halle.   Deemed by The New York Times as “a well-known businessman,” Halle had married Rita Sulzbacher in 1908.  The newspaper noted at the time of their engagement that he “was the first importer of the Mercedes motorcar.”

Three years before the family, including children Louis Jr. and Rita, moved into the 78th Street house they had suffered an unspeakable tragedy Two-year old Joseph Charles Halle died of a codeine overdose.  His pediatrician was arrested on manslaughter.

By now Louis was a partner in the real estate firm of Gulick-Halle Company, Vice President of the Winchester American Corporation, and a director in the Audubon National Bank.

Rita was quick to entertain.  On September 29, 1923 The New York Times reported “Mr. and Mrs. Louis J. Halle will give a reception at their new house, 322 West Seventy-seventh Street, on Sunday afternoon;” and a month later she gave a socially-impressive dinner.  “Mrs. Louis J. Halle…entertained at dinner last evening for Mrs. Ernest Louis Franklin, daughter of the late Baron Swathling and sister of the Right. Hon. Edwin Samuel-Montague, Secretary of State for India in the Lloyd George Cabinet.”

The serenity of the 78th Street block was upset in 1928 when Wagner S. Kelly purchased the house next door to the Halles.  Kelly operated the house as a music studio where aspiring operatic stars studied voice.   On November 9, 1929 both Rita and Louis took the stand against Kelly.  A suit complained that he was violating the residential zoning of the high class neighborhood by operating a business.

Louis testified that the lessons consisted “of operatic singing, loud, penetrating and largely a matter of scale practicing, anywhere from 9 o’clock in the morning until 11 o’clock at night.”  Rita told the court that the sounds coming through the walls of her home consisted “of singing of all kinds, some very beautiful and some very dreadful.”

On June 11, 1932 Rita married Frederic W. Wile, Jr.  Her brother had already begun writing and would soon become well-known.  Louis J. Halle, Jr.’s 1936 Transcaribbean was described by one literary critic as “richly enjoyable;” and his 1938 Birds Against Men received the John Burroughs Medal for distinguished literature.  He would go on to write a long list of highly-regarded books.

By then, however, the Halle family had left West 78th Street.  In January 1937 they leased the housed and by 1950 Rita and Louis had moved to Poundridge, New York.   Dr. Abraham Cohen was now living at No. 322.

Cohen’s respectable practice was tarnished in June 1954 when his name was tied to a Bronx abortion ring.   Detectives discovered that Cohen, along with other Manhattan doctors, were receiving $60 for every woman they referred to the Bronx abortionists who worked out of a house on Sexton Place.

By the time the ring was discovered, more than 200 abortions had been performed.  The women referred by Cohen paid between $300 to $600 for the procedures. 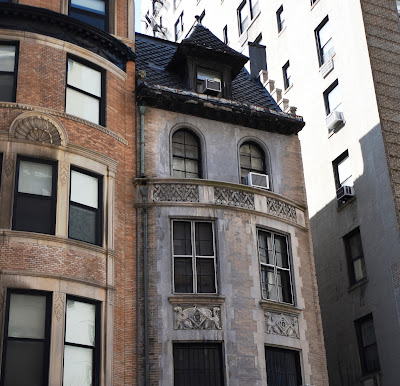 Perhaps because of its unusually slim proportions, No. 322 has survived as a single-family home.  Although a bit bedraggled on the outside, True's interior detailing survives intact. 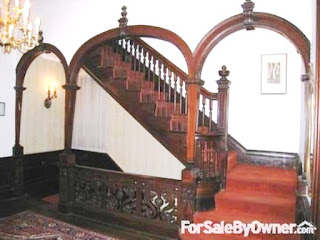