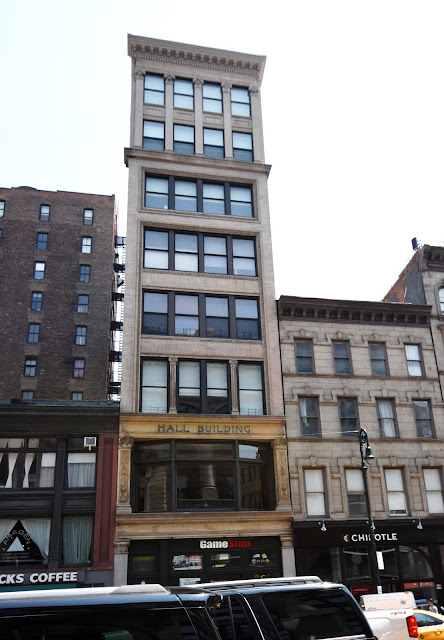 By 1896 the stretch of Sixth Avenue between 14th and 23rd Streets was no longer the neighborhood of modest two- and three-story brick houses it had been in the 1850s.  Now massive retail palaces—many a full block wide—lined the thoroughfare and throngs of well-dressed female shoppers crowded its sidewalks.  One obvious exception was the block between 21st and 22nd Streets on the eastern side.  Here the squat old buildings survived, interrupted by two small stone-faced hotels built in 1870 at Nos. 342 and 344 (later renumbered 676 and 678).

Mrs. M. Cobb owned the three-story former house, now converted to include a street level store, at No. 346 Sixth Avenue.  She sold the 25-foot wide building in March 1896 for $100,000—just under $3 million in 2016.  The buyer was Mrs. Eleanor J. Robinson, described by The New York Times as “a large operator in property in this neighborhood.”

Eleanor Robinson was a shrewd businesswoman.  She resold the property within three months for $120,000, earning a significant profit.  The purchaser was W. M. Hall, a well-known furrier who had done business at Nos. 261-263 Greenwich Street since 1856.  Hall started out in the fur business in 1840 as a boy.  The Real Estate Record & Guide said “Here the character was formed that made him successful, and here he practiced that industry and honesty of purpose and act that won for him every step of promotion in life that carried him from the lowest to the uppermost rung of the ladder.”  He now ran a thriving fur business as well as manufacturing caps and hats.

The fur district had long ago moved north from the Greenwich Street area and the Record & Guide pointed out that Hall was the last to leave.  He commissioned architects Stephenson & Greene to design a modern store and loft building on the Sixth Avenue site.   On November 6, 1897, shortly after the structure’s completion, The Record & Guide pointed out that what the Hall Building lacked in width, as compared with the neighboring emporiums, it made up for in height.

“There have been buildings occupying a larger area of land than the Hall building, but there are none that towers as high in the block as his does, and consequently it is a landmark for some distance around.”  The Guide noted that while many retailers built on leased land and borrowed money to cover construction costs, Hall had paid cash both for the property and the building.  “The cash method being his way of doing business.”

Stephenson & Greene produced a steel-framed, eight-story neo-Renaissance structure faced in limestone and buff-colored brick.  The Guide explained out that Hall’s first requirements were that the building be “absolutely fireproof” and that the upper floors receive sunlight.  It deemed “These requirements have been fulfilled absolutely.”

The article described the arcade show windows as providing an “attractive and artistic exterior effect,” and mentioned the mosaic floors, staircase illuminated by a skylight, and sanitary plumbing.  It summed up saying “it is hard to imagine a better or more fitting monument to perpetuate the memory of an honorable and successful commercial life than this building.”

Hall moved his factory and retail store into the building in October 1897.  At the same time he sold off his cap and hat business.  The American Hatter noted “He will devote his entire attention to the manufacture of furs, retiring from the hat and uniform cap business.”

Hall’s decision to move his store and shop to the Ladies’ Mile was well advised.  The upscale quality of his goods was evidenced in a sale advertisement on December 11, 1898.  Among his large range of articles were sealskin coats, Persian lamb coats, fur gloves and capes, fur robes, muffs and collarettes.  Possibly disturbing to some 21st century readers were items like “natural dog robes,” “sealskin capes,” and “Siberian wolf robes.”   Even on sale, a sealskin coat was priced at $250—more than $7,000 in 2016 dollars.

In 1901 W. M. Hall employed 15 women in his fur shops on the upper floors who each worked an average of 54 hours per week.   Two years later Hall closed the retail store and moved his operation around the corner to Nos. 40-42 West 22nd Street.  The move may have been prompted by the gradual abandonment of the Ladies’ Mile by the great retailers that was already taking place.

In March 1903 Hall leased the building for 20 years at $15,000 per year.   On February 16 Townsend & Montant, auctioneers, sold off all the fixtures in the Sixth Avenue store, “together with a collection of mounted animals and a number of mounted animal heads,” according to The Fur Trade Review.

The store as leased to the Mirror Candy Co. which had several confectionery stores throughout the city.  Milton Schnair & Co. was hired to “overhaul” the former showroom into a candy store.

Meanwhile, upstairs, two of W. H. Hall’s former employees carried on what had been his fur retail business.  Cloaks and Furs announced in January 1904 that “Solomon [sic] & Burroughs have opened a retail fur establishment in the W. H. Hall Building…They were formerly connected with the establishment of W. H. Hall.”  Along with selling furs, the new company offered the remodeling of out-dated garments and repairs.

Bernard Salomon lived in the Bronx.  As he did every evening, he boarded the elevated train at 23rd Street and Second Avenue heading home.  This night, despite the crowded train, he found himself in danger.  The New York Times reported the following morning “After leaving the Twenty-third Street station, Mr. Solomon [sic] found himself surrounded by four men.  Both his hands were firmly clasped behind his back and held there in a viselike grip.”

The bold crooks seemed un concerned withthe other passengers.  When Salomon began to cry out, another thug put his hand over Salomon’s mouth and another clasped his arm around his throat.  While he was held his $125 gold watch was broken from the chain.

As the train approached the 34th Street station, the four men pushed aside the platform guard and jumped from the still-moving car.  But Salomon was not about to let the crime end there.  He and a few other passengers ran after the thugs.  Their shouts of “Stop, thief!” caught the attention of Patrolman Coleman who joined in what The Times called “an exciting chase.”

Much fitter than the rest of the pursuers, the policeman overtook 23-year old Herman Merena, and then waited for the others, including Salomon, to catch up.  Unfortunately for Salomon, whom the newspaper said had been “garroted, assaulted and robbed,” Merena was not in possession of the watch.   He was, however, arrested and charged with complicity in the robbery.

While Mirror Candy remained in the store, the upper stories were being leased to silk and trimmings companies by 1916.  That year the New England Ribbon Company, dealers in “velvet ribbons and inside dress beltings” was in the building, as were silk dealers Fleischman & Yellin.

In March 1918 partners Harry Yellin and Herman Fleischman suffered public humiliation when they were arrested for receiving stolen goods.  For some time the silk dealers of the city had been plagued with burglaries.  On February 16 the loft of Fithian & Co. at No. 104 East 25th Street was robbed of $7,000 worth of silks.

The case was finally cracked when those goods found and identified in Fleischman & Yellin’s store.  Shockingly, the confessed burglars were William Heydorn and Edward C. Burgess, both detectives of the Second Branch Bureau.  An accomplice, Isidore Pindek, gave authorities incriminating testimony.

In confessing to several of the burglaries, he mentioned one that took place on 23rd Street.  “A gray automobile truck, owned by a concern on Fifth Street…took the silks away and back them up at Flesichman’s place.  The detective stood outside on the street as we took the goods upstairs.  He told us to get some money that night.  Fleischman handed me only $75.  I took a few dollars myself and gave $45 to the detective.”

In August 1921 cloak and suit manufacturer Mayer Messinger leased the entire Hall building.  His 21-year lease totaled $350,000.  In reporting on the transaction, the New York-Tribune mentioned that he “will alter the store, basement and second floor for his own business.”

Seven years later Messinger’s landlord, the Hall-Lary-Cook Realty Company, sold the building for $125,000.   Despite the Record & Guide’s former assertion that the Hall Building would “perpetuate the memory” of W. M. Hall; The New York Times called it the “former Mirror Candy Company building.”  By now, following the extension of Sixth Avenue, the building had been renumbered 682. 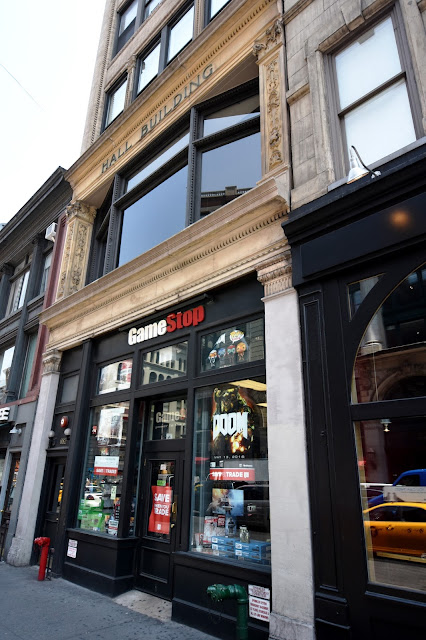 The old Ladies’ Mile suffered neglect throughout much of the 20th century, before a renaissance in the last quarter.  In 1987 the upper floors were converted to residential space with one apartment per floor.  Although W. M. Hall’s arcade shop windows have been lost, the stone pilasters, capitals and entablature survive, along with the wonderful faceted Chicago-style windows of the second floor.  And while Hall himself is long forgotten, bronze lettering still announces his name.