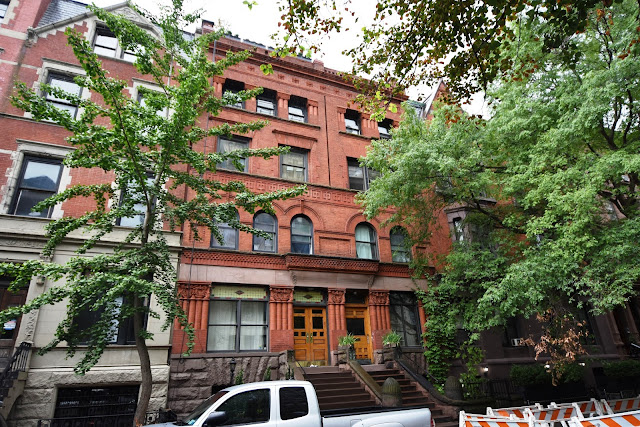 In 1885 nearly the entire south side of the 82nd Street block between Ninth (later renamed Columbus) and Amsterdam Avenues was under construction as speculative developers shaped the new residential neighborhood.  Yet two vacant lots, Nos. 130 and 132 in the middle of the block, were just a little late to the party.

It was not until 1887 that developer Nathan W. Riker completed the two modern residences.  Designed by Lamb & Rich, the brick-faced Romanesque Revival homes were the last word in residential design.  When construction began in November 1886, The Real Estate Record & Builders’ Guide commented that the butler’s pantries extended into the rear lots; and that both houses “will be finished throughout in hardwoods, including mahogany, ash, chestnut, hazel and oak.”   The $75,000 combined construction cost would translate to just under $1 million each in 2016.

Lamb & Rich had produced near mirror-image structures that demanded attention.  Creative brickwork (a honeycomb frieze above the first floor and a chain-like design above the second, for instance) and terra cotta decoration were utilized in the muscular Romanesque design.  The rough-cut brownstone basement level was interrupted by a dramatic, sweeping staircase.  The low stone stoop walls terminated in hefty bullet-like newels. 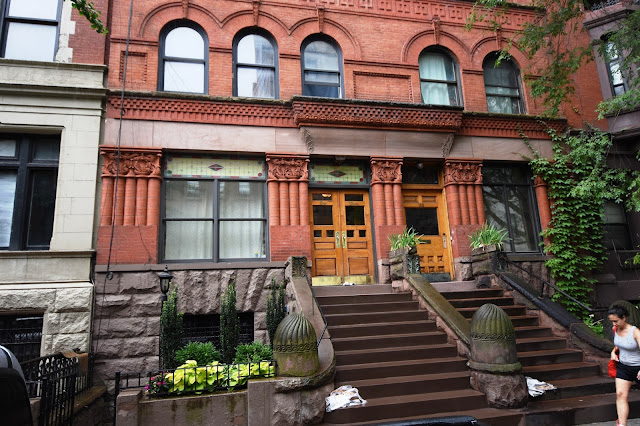 The parlor level was distinguished by grouped columns of rounded brick joined by communal terra cotta capitals.  The regimented geometric designs of the stained glass transoms in between were in marked contrast to those fantastic, swirling leafy capitals.  The second floor featured arched openings, the third floor windows were framed by brick quoins and splayed brick lintels, and the fourth floor was marked by pseudo-loggias supported by miniature versions of the grouped columns below.

In fact, the houses were not quite mirror-image.  No. 130 was three bays wide while its 17-foot wide neighbor was just two.   No. 130 became home to banker Arthur W. Sherman and his wife, the former Carrie Carr.   Carrie was Sherman’s second wife and two years after they moved in a son, Arthur Carr Sherman, was born.  (Sherman had a grown, married daughter from his previous marriage.)

Arthur Sherman was a member of several exclusive clubs, including the Seawanhaka Yacht Club and the Metropolitan Club.  He had also served as the Treasurer of the Astor Library.

On Friday, March 20, 1891, Carrie Sherman died suddenly in the 82nd Street house.  Her funeral was held there the following Monday morning at 10:00.  Arthur Sherman was left to rear his two-year old son with the help of the household staff.

Sherman was 51 years old at the time of Carrie’s death.  Shortly afterward he showed symptoms of Bright’s Disease—known today as nephritis.  He suffered with the condition for several years; managing all the while to continue his work at the Gallatin National Bank.  But on January 31, 1898 he became seriously ill.  He took a room in the Metropolitan Club where he was attended to by his physician, Joseph B. Bissell.

Nine-year old Arthur was attending school in Pomfret, Connecticut.  On Monday, February 7 Bissell “saw that the end was near,” according to The New York Times.  Arthur and his half-sister, Mrs. F. A. King who lived in Bristol, Rhode Island, were summoned.  Neither was able to reach New York before Sherman died at 9:30 the next night. 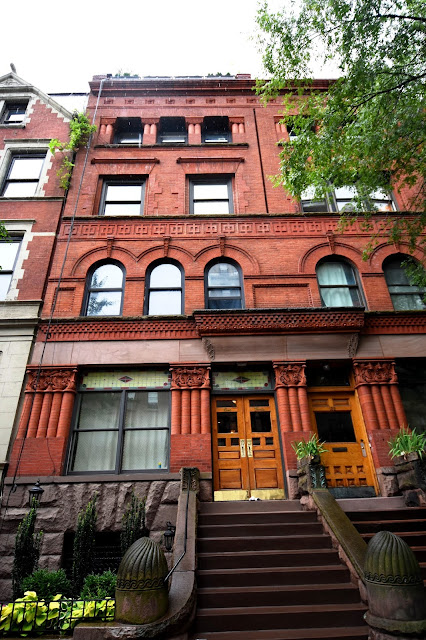 No. 130 became home to Princeton-educated Dr. Alexander H. Travis.  Following his graduation in 1884, he continued his studies at the College of Physicians and Surgeons; then studied “special courses” at Wurzburg, Vienna, and Dublin.

In 1904 Princeton’s Record of the Class of 1884 noted “Returning to America he opened an office in the better part of New York in the private house district on the West Side.”  The record said “Physicians down town recommended him to patients moving into that section of the city…To-day he has a large and lucrative practice.”  The article added “Travis is still unmarried and claims to have been too busy to think of such things.”  But the author felt Alexander needed to correct that.  “ Since he has been so successful on the practical side it is time he turned his attention to the sentimental side.”

In the meantime, the narrower house next door had been purchased by Peter J. Masterson and his wife, Sue.  Their daughter, Irene, was just over one year old when they moved in.  Sue Masterson’s life in the new home would be filled with grief.  Peter Masterson died soon afterward; and on Sunday, January 3, 1892 little 6-year old Irene died of diphtheria.  Her funeral was held in the house the following Tuesday.

Sue A. Masterson left 82nd Street shortly thereafter.  No. 132 was purchased by Mrs. Edith M. Warford.   Edith briefly took in lodgers, one of which was Isaac P. Coale, who was living here in 1898 when he was appointed a Commissioner of Deeds.

By 1914, after owning the house for two decades, Edith lost it in foreclosure.  An auction held in March required that the buyer cover Edith’s outstanding mortgage of $15,000; a substantial $370,000 by today’s standards.

By the time Edith lost the house No. 130 was being operated as a boarding house.  Among the residents between 1911 and 1919 were Selma A. Weigel, a nurse; civil engineer Harold Lewis English (he was a graduate of Dartmouth and “draftsman and designer” for the Delaware, Lackawanna and Western Railroad); and C. S. Chappotin.  Like Isaac P. Coale, Chappotin was appointed a Commissioner of Deeds on December 23, 1919.

Although No. 130 was home to boarders, it maintained the atmosphere of an upscale private home.  That came to an end on Thursday, March 11, 1920 when everything in the house was sold at auction.  The sale advertisement touted “15 Rooms richly furnished in mahogany, birdseye maple and oak; fine carpets and rugs, lace curtains, draperies, upright piano; living room suites, easy chairs and couches.”

By 1930 the house was owned by the widowed Andrea B. Ericson and her son Arnold.  Arnold died unexpectedly on January 29 that year; his funeral being held in the house on February 2.

Andrea took in at least one boarder.  Edward Hackett was the manager of the Wilson Brothers’ haberdashery in the Ritz-Carlton on Madison Avenue.  On September 9, 1930 Hackett had $55 in cash which he intended to take home to pay his rent.  Andrea Erickson would have to wait.

Around 3:45 that afternoon two young men casually walked into the shop and one asked to see a shirt.  After he expressed dissatisfaction with the one shown to him, the clerk turned to select another.  As he did so, the second man pulled a pistol and demanded cash.

The cash drawer containing $350 was emptied and the bandits took a total of about $5 from the clerks and the only other customer, C. G. Thompson.  They also took Hackett’s $55 rent money.

The three victims were locked in the store's basement.  The thieves did not realize that a passage connected it to the hotel lobby.  Edward Hackett burst from the basement there and called for police; but the robbers had by now vanished.

Like its next door neighbor, No. 130 continued on as a rooming house through most of the 20th century.  In 1951 Endee Schultz lived here when her name was listed by the Government as being engaged in “Communist Activities in Alien and National Groups.”

In 1973 No. 130 was converted to two apartments per floor.  No. 132 was renovated in 2006, resulting in an apartment in the basement level and a single residence above.  Although No. 132 has sadly lost its stained glass transoms and the replacement windows in both homes could have been more historically sympathetic; Lamb & Rich’s striking Romanesque Revival designs endure.

photographs by the author
Posted by Tom Miller at 3:52 AM