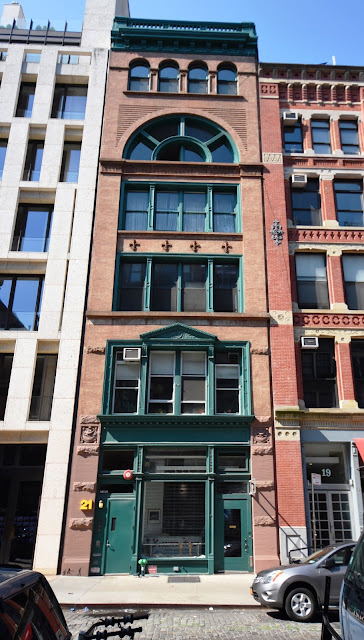 When Captain Thomas Barclay of the British Navy moved into the new house at No. 21 Bond Street around 1830, the neighborhood was the most exclusive in Manhattan.  Along the block between Broadway and the Bowery handsome mansions boasted luxurious amenities—some of them faced in marble.

But in 1892 much had changed.  Many of the once-grand mansions had been razed to make way for commercial structures; and the others had been converted for business.  Young’s Portrait Studio used the former Barclay house as its storeroom.  Disaster occurred early in the morning of March 18 that year.  A headline in The Evening World announced “Pictures in Fiery Frames” and reported that fire had erupted in the basement of the building, causing $2,000 damage (about $54,000 in 2016).

It was most likely that unfortunate incident that prompted the owners to sell.  Real estate operator Leon Tannenbaum purchased No. 21 Bond Street for $40,400.  Tanenbaum was highly active in the changing neighborhood and owned a staggering number of properties.  In 1894 court documents related “Mr. Tanenbaum, who has been peculiarly well acquainted with property in the vicinity of Bond street for a number of years…rents over 1,000 buildings in the vicinity.”

Tanenbaum commissioned the architectural firm of Buchman & Deisler to design a modern loft and store building for the site.  The six-story structure, completed in 1893, was a remarkable interpretation of commercial Renaissance Revival style.  An attractive cast iron storefront, embraced by brownstone piers, joined the second story Palladian-inspired openings.   Prim rosettes marched around the framing and a cast iron triangular pediment was filled with delicate floral ornament.

Grouped openings on the third and fourth floors (with interesting terra cotta fleurs-de-lies within the spandrel) visually joined with the large fanlight-like window at the fifth to create a dramatic arch.  Below the iron cornice was a row of arched windows, diminished by the drama of the multi-floor elements below, but nonetheless handsome.

When the building opened on February 1, 1893, it was fully rented.  Tanenbaum’s yearly rental income on the 10-year leases was $6,750 for the first five years and $7,250 afterward.  As the city debated the extension of Elm Street through to Lafayette Place in 1894, Tanenbaum testified that the “most marked changes have taken place in the last two or three years north of Houston street—the erection of enormous fireproof structures.  I should say probably ten or twelve of the finest store buildings in the City of New York have been erected there within the last two years.”  He was including, of course, his own buildings like No. 21 Bond Street.

Among the first tenants was Jules Stein's casket company.  In 1896 he employed 16 men, six women, and three boys under 18 years old.  The employees worked an average of 53 hours a week.  Stein would be in the building at least through 1900.

At the time attitudes regarding working conditions were changing in New York.  Socialistic ideas had been arriving from Europe for decades and the concepts of labor unions and improved work conditions were by now taking hold.  At the turn of the century A. Hahn & Co. was doing business at No. 472 Broadway; but as early as 1904 it leased space at No. 21 Bond Street for its leather works factory.

The manufacturer of high-end leather luggage was not sympathetic to the union movement.  It was a clash of interests that would erupt into a Bond Street riot.  When workers walked out on strike during the first week of January 1904, the management of A. Hahn & Co. filled their positions with non-union workers.  As the picketers stood on the frigid sidewalk for three weeks, the factory went on as usual.  But when the 15 workers left at 6:00 on the night of January 29, chaos broke out.

The 12 strikers attacked the men.  But, according to The Evening World the next day, “The workmen were as ready for the fight as were the pickets.

“They went at each other with clubs and fists, and fully a thousand people passing along the Bowery gathered and cheered the fighters until some one in the crowd fired a revolver into the air.”

Not only was the firearm produced, but so were knives.  Someone sent a call to the Mulberry Street Police Station.  The Evening World reported “six policemen with service sticks broke heads among the fighters until they dispersed.”

By the time order was restored one man, Samuel Hartman, had been stabbed three times in the back, Samuel Cohen “was so severely beaten that he couldn’t walk,” and Max Dubler had head injuries, “whether from police clubs or pickets he couldn’t say.”

The battle between A. Hahn & Co. and the unions continued for more than two years with neither side conceding.  Finally in September 1906 Trunks, Leather Goods and Umbrellas reported that after an 11-week strike A. Hahn & Co. “refused to recognize the union in any way, offering to employ the men whether union or not, individually.”

The partners, Abraham Hahn and Max Kastan, came up with a solution to the labor problem.  Kastan announced his retirement in the fall of 1906 and the firm stated “The business will be continued by Mr. Hahn, who is now looking around for a suitable location and may locate in Newark.”

By April 1907 A. Hahn & Co. had removed its factory from Bond Street, no doubt confident that it had defeated the unions.

About the time that Hahn & Co. left, Otto R. Hartman moved in.  He had previously been President of the American Philip Morris & Co. and now headed the New York branch of the British-based H. L. Savory & Co.  The New York division was organized in 1907 and the United States Tobacco Journal explained its object was “to manufacture and sell in this country the Savory cigarettes which had obtained a strong hold in England.”

The same year that H. L. Savory & Co. went under, the first signs of the apparel and millinery trades appeared at No. 21 Bond Street.  In January Chest’s “artificial flower and feather factory” was already operating here; and in November the top floor was leased to Fechheimer-Fischel Company, wholesale tailors.

Among Chest’s employees were Italian immigrants, including Mrs. Peter Chiasolo and her brothers.  During their noon lunch break on January 18, 1909 the workers went outside for what The Sun described as “a playful snowball fight.”  But things quickly turned from playful to dangerous.

When Mrs. Peter Chiasolo decided that Angelo Guastello was being “too familiar” she began repeatedly striking him in the face.   The wronged woman’s brothers attempted to come to her defense, but Guastello bolted—heading for what he considered his best refuge, a police station.

Not only did Mrs. Chiasolo’s brothers run after him, so did other factory workers.   When he looked over his shoulder and saw the mob chasing him, he drew his revolver and began firing it in the air.  Giuseppe Rubino was sure that Guastello had shot one of his comrades.  Just as they reached the police station, he overtook his frightened co-worker and the two fell into the snow, fighting.

The Sun reported “Guastello’s revolver went off and Rubino got a slight bullet wound in the side.” It would seem that the affray was ended with police rushed out of the station house.  It was not.  Just as the officers separated the two men, Mrs. Chiasolo appeared waving a knife and tried to stab the man who had offended her honor.

“The policemen had to drag her away and beat off several Italians who wanted to get at Guastello,” said the newspaper.  There was little artificial flower making back at No. 21 Bond Street that afternoon.  “Mrs. Chiasolo and Guastello were arraigned in the Tombs court with four Italians who were charged with interfering with policemen,” said The Evening World.  Giuseppe Rubino was removed to St. Vincent’s Hospital.

Textile wholesalers occupied the building from the late 1930s until 1972 when owner William Israel’s Farm Cooperative Corporation converted the building for theatrical purposes.  The project resulted in a theater the first floor, the Producers Showcase 21, and studios and offices above.  Six years later another alteration retained the theatrical space at ground level, but transformed the upper stories to one “joint living/work quarters for artists” per floor.  Department of Buildings documents, interestingly, clearly noted “theatrical studio for invited guests only.  Public not to be admitted.”

In 1996 the continuing change in Bond Street’s personality was reflected in the opening of the Daryl K. boutique at ground level.

photograph by the author
Posted by Tom Miller at 3:29 AM