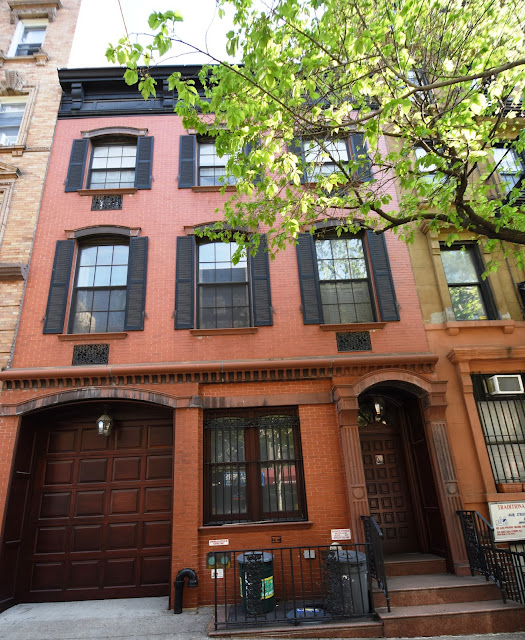 Decades before the bulk of New York’s German population would migrate to Yorkville from the Lower East Side, Rev. C. J. Renz founded the Immanuel German Evangelical Lutheran Church in 1863.  It originally worshiped in the Yorkville on 86th Street, before erecting a modest church at Nos. 213-215 East 83rd Street.  The handsome brick-faced house at No. 223 East 83rd Street was purchased for the rectory.  The Italianate-style residence featured elliptical-arched openings with brownstone lintels and sills and a pressed metal cornice.

The charismatic Rev. Renz left his German-language congregation in 1867.  Membership quickly dwindled, causing financial problems.  The first casualty was the rectory, lost in foreclosure in 1876.  But a plan seems to have been worked out.  The building was purchased by Richard G. L. Dieffenbach, who immediately leased it to Friedrich Dieckmann.   The arrangement between the two Germans allowed the pastor of Immanuel German Evangelical Lutheran Church to remain in the house.

It appears that at least one boarder was taken on to help with expenses (including the minimal rent of $650 over the first five years which Dieffenbach charged).   In 1885 Samuel Wood listed his address here.  He was a First Grade Fireman at Engine Company No. 39.

Dieffenbach continually renewed Dieckmann’s lease as Immanuel’s pastors lived on in the house.   Rev. H. Hobler resided here in the late 1880s while he watched in desperation as his congregation continue to diminish.  By 1889 the membership had fallen to just 13 congregants and Immanuel was forced to sell its church property.  Rev. Renz was convinced to return, and by 1891 the congregation had swelled to several hundred.

The former church property was re-purchased and plans were laid for an impressive, new building.  Construction was started in February 1893 and was completed the following year.  The new structure included “apartments” for the pastor.  The leased rectory at No. 223 was no longer needed.

Residents came and went at No. 233 East 83rd Street over the next few decades.  Richard Fullan lived here when he was appointed a Commissioner of Deeds for the City in 1902; and grocer J. E. Stein was living here in 1905.  He was named in a lawsuit as sustaining “loss and damage” when Charles Bettels failed to deliver 160 tubs of Summer Swiss Cheese that year to him and other retailers.  And in 1918 Samuel H. Federman lived at No. 223 while he studied at the College of Pharmacy of the City of New York.

But a drastic change to the red brick house was only months away.  In June 1919 the Economy Taxicab Co. was incorporated.   Among the three principals was Henrietta Zimmerman, who owned No. 223 and lived there.  She converted the ground floor to a garage for the new business.

Unfortunately the Economy Taxi Cab Co. seems to have quickly failed.  In 1922 Henrietta Zimmerman was still listed as owner and was still living in the upper floors.  But the ground floor was now described in Department of Building documents as a “private garage (four cars).”  Oddly enough, in 1928 the description was changed to “stable for 10 horses and garage for 4 autos” on the first floor, with single-family residential space above.

In 1931 a conversion resulted in an “office” in the basement and first floor, with one “housekeeping apartment” on the two upper floors.   The work permit filed in 1990 to restore the house to a single family home was surprising at best.  It noted intentions to “change in use on the first floor from stable for horses” to a residence. 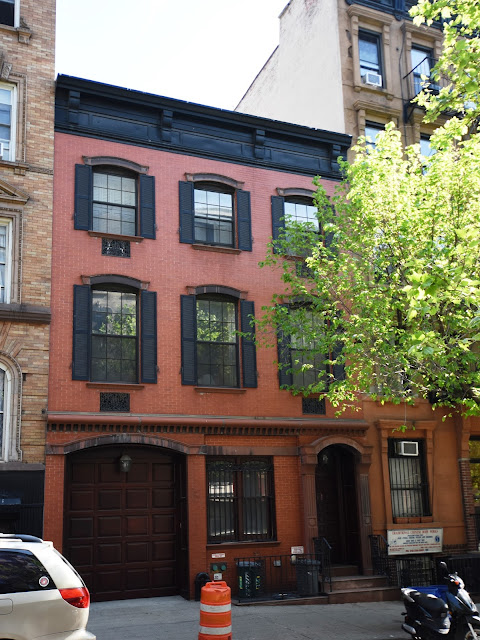 The make-over included a garage opening that sympathetically attempted to copy the brownstone lintels above, and a dentiled cornice between the first and second floors.   Although no attempt at historic accuracy was made for the garage or entrance door, the rescued residence is a charming survivor with a colorful history.