Luther and Annie Parsons Ward Kountze enjoyed the lifestyles of Manhattan’s elite.  Luther was the head of Kountze Brothers, a Wall Street banking firm; and Annie was descended from the Barclays, DeLanceys and the Livingstons.  The couple had four children; one of which, Helen, was married to Robert L. Livingston.  When she died unexpectedly in 1904, her funeral was held in the Kountze mansion.

Kountze, now widowed, died in the 57th Street house on April 17, 1918 at the age of 76.  By now the once-exclusive residential neighborhood had greatly changed.  While a few opulent mansions held on, most of the millionaires had relocated further up Fifth Avenue along Central Park; their former homes replaced by commercial buildings.

On a single day in 1925 William Randolph Hearst and Arthur Brisbane announced their plans to erect “a group of commercial” buildings on East 57th Street, and one on West 54th.   Among the 14 structures being demolished was No. 5 East 57th Street.

The New York Times reported on June 13 that the project included “a twenty-story office and store building at 5 East Fifty-seventh Street.”  It added that the “clearing of the sites…will see the passing of the old home of Mrs. Luther Kountze, for many years a social leader in New York.”

Prolific architect Emory Roth went to work designing all but one of the Hearst-Brisbane buildings.  For No. 5l East 57th Street he concocted a Gothic-Meets-Art Deco design which emphasized the verticality of the 22-story skyscraper.  Alternating bricks in the upper piers ran uninterrupted, zipper-like, drawing the eye upward eight stories.  The spandrels between were filled with crisp Art Deco panels which stood in stark contrast with the fussy decoration of the lowest and uppermost floors.

Roth took the recent 1916 “set-back law” to heart.  The legislation required the upper floors of skyscrapers to be stairstepped back; allowing sunlight to reach the streets below.   The setbacks of No. 5 were exaggerated, proving outside space for the few fortunate tenants willing to pay for the amenity.  The tenants of those upper floors enjoyed sunlight from all sides as well, a distinct advantage.

The surrounding neighborhood had, for more than a decade, been the center of Manhattan’s art and antiques trade.  Immediately upon its completion No. 5 East 57th Street saw the arrival of some of New York’s most respected galleries and dealers.  Among the first was the Babcock Galleries, founded in 1853, which specialized in the works of American artists.  The gallery moved from No. 19 East 49th Street to No. 5 East 57th Street in the summer of 1927.  The caliber of the artwork displayed and sold by Babcock Galleries was evidenced in December that year, when Gilbert Stuart’s portrait of Thomas Jefferson was put on display.

Another firm specializing in American artists was the Dudensing Galleries.  It promoted the careers of budding artists by holding an annual competition of American artists.  The winners of the 1928 contest were announced on New Year’s Day 1929.  They included young Robert Fawcett who, despite his training as a fine artist, would go on to achieve fame as an illustrator for periodicals like The Saturday Evening Post, Collier’s, Holiday and Cosmopolitan.

On an upper floor was the workshop of violin maker John Friedrich who came from Germany in 1883.  Friedrich’s violins had been exhibited at several world’s fairs and won him many prizes.  In 1935 he helped in the search for a stolen 18th century cello by Petrus Guarnerius, valued at around $10,000.

Friedrich had worked on the instrument “a dozen times” and he was able to identify “the work he had done on it to bring it back to the standards set by the family, whose head was a fellow-artisan with Antonio Stradivari,” reported The New York Times.

While the galleries in the building sold valuable paintings and John Friedrich worked on priceless violins and cellos, other New Yorkers were suffering the Great Depression.  In 1933 Mrs. William Randolph Hearst took an office in the building to direct New York City activities for Eleanor Roosevelt’s “canteens for unemployed women.”  On May 22, 1933 the Seventh Regiment Armory at Park Avenue and 66th Street was taken over for a ball to benefit the cause.  Mrs. Roosevelt personally appeared at the function that hoped to raise $50,000 to maintain the canteens.

The canteens, or “rest rooms,” were located at No. 22 East 38th Street and No. 247 Lexington Avenue.  Open every day until 5:00, The Times described them as “gathering places for unemployed girls looking for work.  Light luncheons are served free and a congenial atmosphere of friendliness is maintained by several volunteers.”

Not everything the Roosevelts did during the Depression years was universally admired.  On March 26, 1936 a new gallery called the Defenders of Democracy opened with an exhibition of ten murals described by The Times as a “pictorial jeremiad against New Deal personalities and policies.”  President Franklin Roosevelt was “derided” in the satirical murals.

The exhibition was still going on three weeks later when, on April 14, the United States Navy ordered that the four guards at the gallery would have to change their uniforms.  The Navy said the military-type outfits were “too much like Marines.”

Later that year, on November 16, a less controversial gallery moved in.  The Newhouse Galleries, operated by Clyde Mortimer Newhouse, had been founded by his grandfather in 1878 in the Midwest.  The firm moved to New York City in 1905, offering American paintings by still-living artists like Winslow Homer, William Chase and Hudson River School painters like Jasper Francis Cropsey.  It now leased three floors in the 57th Street building and hired John Russell Pope to renovate the space.

The New York Times described the new galleries as “sumptuous” and noted “The main exhibition room is decorated in modified Moorish or Spanish style, with white walls, rough in texture, arches and a deeply paneled ceiling.  On an open mezzanine at the rear may be glimpsed the library, and several smaller exhibition rooms on both floors add to the facilities.”

Just a week after opening in its new location, The Newhouse Galleries sold two masterpieces which were then donated anonymously to the Fine Art Gallery of San Diego.  The paintings were a portrait of Philip II as a child by Alonso Sanchez Coello, and a panel portraying St. John the Evangelist by The St. Nicholas’s Master.

The pieces were the first of several similar masterworks sold by Newhouse Galleries here.  In February 1937 it sold El Greco’s “St. Francis;” in May that year the Art Institute of Chicago purchased John Singleton Copley’s 1777 portrait of Squire Hyde; and a month later the Phillips Memorial Gallery in Washington DC bought Goya’s “Portrait of St. Peter.”

Another high-end gallery in the building was the Douglas Curry Galleries.  It staged an exhibition of rare pieces of early American pewter, mostly from private collections, in February 1938.  That year the Tonying Gallery, which specialized in Asian art, opened here as well.

Not all of the tenants, of course, were high-end art dealers.  In 1938 Donald May ran his posh jewelry store in the building.  He discovered that year that while his customers came from the most prominent families; the Depression dealt a hard blow to even some of these.

Ten Broeck M. Terhune was described by a newspaper as “socially prominent.”  On January 14, 1938 the 50-year old walked into Donald May’s shop and left with a diamond ring, a diamond clip and a diamond and platinum bracelet, valued together at $6,000 (more in the neighborhood of $100,000 today).  Terhune signed a “memoranda” saying he intended to sell the pieces “to friends” and would return with the money.  He did not.

Nearly two months later Donald May had Terhune arrested.  The Times reported “Detectives..said these gems were accounted for in pawn tickets in the prisoner’s possession.”  The disgraced former millionaire was charged not only with the theft of May’s jewelry, but with between $40,000 and $50,000 in other such larcenies.

The Newhouse Galleries left in 1938, moving down the street to No. 15 East 57th Street; but the building continued to house upscale galleries.  On October 16, 1940 the Jacques Seligmann Galleries moved from next door at No. 3 to No. 5 East 57th Street.   Like the Newhouse Galleries, it dealt in masterworks.  In 1943 it sold a Renoir and a Goya to the Cleveland Museum of Art; and in 1945 that museum purchased Picasso’s 1903 “La Vie.”

While the building continued to attract galleries (Orrefors Galleries opened in February 1940, for instance, and Israel Sachs, one of the nation’s foremost authorizes on antique furniture, sold 18th century American furniture and antiques here), it also housed the offices of several noted architects.  In November 1940 William H. Deacy took space.  He was followed by Herrie T. Lindeberg, designer of expansive country houses, who leased the entire 12th floor in April 1941.  The architectural firm of Skidmore, Owings & Merill would also take space in the building.

At mid-century the ground floor space was occupied by the well-known Drury Lane Restaurant.  In 1956 the newly-formed Biograph Television Company took space on an upper floor.  The purpose of the organization was to rescue the endangered silent motion pictures produced by the Biograph Studios.  The firm bought up more than 10,000 rolls of film, most produced by D. W. Griffith, with stars like Lillian Gish, the Pickfords and Mae Marsh.

In 1986 Chanel’s first New York store opened in the building; introducing its famed Chanel No. 5 eau de parfum that year. 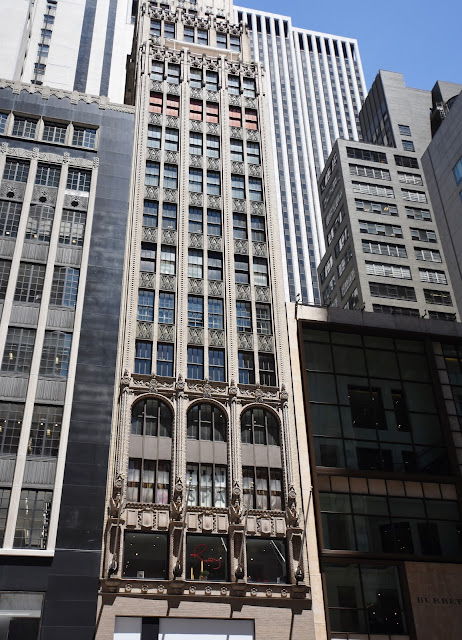 Although the lower two floors of Emory Roth’s 1926 hybrid were obliterated for a high-paying retail tenant; the upper floors survive intact—a relic of a time when wealthy Jazz Age developers like William Randolph Hearst and Arthur Brisbane were changing the face of Manhattan.