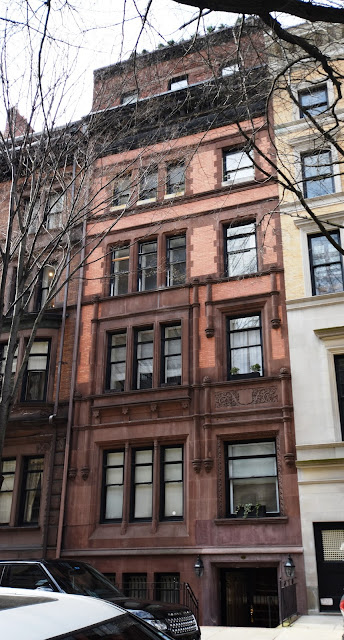 By the last decades of the 19th century several prolific New York City architects realized that profits could be substantially increased by cutting out the middle man.  Architects like Charles True and Charles Buek established their own real estate development firms.  Joining them in the trend was Richard W. Buckley who, with Robert McCafferty, formed McCafferty & Buckley in 1880.

The men turned their attention to the developing Upper East Side where upscale residences were being constructed.  The New York Times would later say “McCafferty & Buckley produced many of the handsomest private dwellings on the east side of the city.”  Among those handsome private dwellings was the row of four residences at Nos. 10 through 16 East 77th Street.

Construction began in 1895 and was completed the following year.  Buckley’s 25-foot wide neo-Renaissance style homes were clad in brick and brownstone  Like its neighbors, the English basement and parlor levels of No. 14 were faced in planar stone while the carroty-colored brick of the upper floors avoided visual heaviness.  A high brownstone stoop led to the doorway, framed in foliate carving and crowned by engaged colonnettes and an elaborately carved panel with a blank shield.

George Thebaud Maxwell was the principal in the firm of Maxwell & Co. at No. 32 Broadway.  The 30-year old broker and his wife, the former Marie Raymond, had two sons, George Lascelles and Charles Raymond.

The Maxwells not only decorated the mansion with antique furniture and costly artwork; but George filled it with his prized collection of medieval armor.  The Princeton Alumni Weekly called it “one of the finest private collections in this country.”

Not having a daughter did not prevent Marie from hosting debutante and bridal entertainments.  In November 1903 she gave a reception followed by a dinner and dance for Alexandra H. Stevens.  Before Justine Ingersoll married Dr. Harold Sears Arnold in Grace Church in October 1913, Marie gave “a dansant for the bridal party and some of their friends.”  And two years later she hosted a dance in the house for debutante Marie Tailer.

Maintaining an upscale home with two boys required a full domestic staff.  In 1906 Marie was in search of a new housekeeper.  She was precise regarding the woman she was looking for; one requirement being that she was unmarried.  Her advertisement on February 13 specified “Refined German lady; widower or bachelor; likes children; highest references.”

When Marie Maxwell’s father, Colonel Charles H. Raymond, died in his Morristown, New Jersey home in September 1916, his funeral was held in the 77th Street house.  He had earned his rank in the Civil War and was prominent in the insurance business.

Like other moneyed New York families, the Maxwells' city home was used mainly during the winter season.  They maintained a country estate, Wake Robin, at Oyster Bay, Long Island.  The New York Times called it “one of the show places of the section.”  They also maintained a home in Pau, France and spent much of each year abroad.

Both sons were schooled in Europe; but as their educations came to an end they returned to No. 14 East 77th Street.  It may have been this sudden need for additional space that prompted the Maxwells to hire architect John H. Duncan to design an additional floor in the spring of 1920.  Surprisingly, Duncan gave little effort to melding the $30,000 addition with the original structure—neither in materials or design.

As the family traveled to France each year, Marie helped the staff who did not accompany them to find temporary employment.  In 1921, for instance, she placed an advertisement that read “Lady going abroad this week wishes to place her cook, laundress, maid, chambermaid, kitchenmaid.”

Marie Maxwell’s interests were rarely political; but Prohibition changed that.  On August 24, 1922 she hosted a luncheon at Wake Robin for the Molly Pitcher Club.  A branch of the Association Against the Prohibition Amendment, its socialite members resolved that afternoon to “check any tendency on the part of our national Government to regulate the personal habits of the American people except those habits which may be designated as criminal.”

By now the Maxwell boys were young adults.  Before long both would cause headaches to their parents and bring unwanted press to the family’s name.

In 1924 Charles was working in his father’s office as a clerk, earning $25 a week.  A Fifth Avenue dressmaker, Nanine Simpson Breval, caught his eye.  Charles began seeing the slightly older woman and on October 21 they secretly married.  Marie Maxwell was in Europe and blissfully unaware that her son had moved out of the 77th Street house and into an apartment at No. 64 East 86th Street with his bride.

The news leaked out and a month later, on November 24, Charles was back in the family house, telling reporters there was no truth in the rumors.  But The New York Times reported “A friend of the family said yesterday that if Mr. Maxwell had married Miss Breval he was trying to keep it a secret because he did not wish to alarm his mother, who is in Europe.”

In fact, Charles had been ordered back to 77th Street by his father.   And all attempts to hide the scandal from Marie were soon pointless.  Nanine sued Charles for desertion and won $100 a week alimony and $1,500 counsel fees.  Charles’s attorneys protested the large amount (about $1,350 a week in 2016), saying it was four times the young man’s salary.  Nanine’s lawyers countered, pointing out that he had an $80,000 trust fund.

Having won her case, the humiliated and enraged “former Fifth Avenue modiste” now went after George T. Maxwell.  On September 28, 1925 she sued him for $250,000 in damages.  She maintained that she “was living happily with [Charles] as his wedded wife, and as such was cherished and loved by him and was enjoying his comfort, support, protection and consort.”  But then, her complaint said, George “maliciously enticed and induced his son to desert and abandon” her, leaving her “without support of protection.”

The story had a tragic ending when Charles Raymond Maxwell was killed 10 months later, on July 13, 1926, in an automobile accident near Nantes, France.

On August 22, 1932 son George married Katherine Thraves.  The newlyweds seemed to lead model lives of wealthy couples.  Marie had transferred title of the 77th Street house, now valued at $118,000, to George, and the couple owned a 13-acre estate called “Oakleigh” in Virginia.  On March 15, 1933 The New York Times reported “Mr. and Mrs. George Lascelles Maxwell, who are returning from Paris, will give a reception on the afternoon of March 23 at 14 East Seventy-seventy street.”  All seemed perfect in the Maxwell household.

But it was not.

Katherine was pregnant at the time.  That summer she and George went to Virginia where she lived in terror.  George, according to testimonies later, was addicted to alcohol and drugs.  He was verbally and physically abusive and continually humiliated Katherine in public with profane outbursts.

On November 5, 1933, due to a kidney condition which caused her to be bedridden, Katherine moved back to No. 14 East 77th Street with George.  Full-time nurses were hired, yet George “on many occasions treated [Katherine] with inconsiderate physical cruelty, thereby inuring her health, and endangering the health of her unborn child,” according to court documents later.

Katherine was removed to a hospital on November 5.  George continually interfered and at one point was so deranged with drugs and liquor that he had to be admitted himself.  The baby was born on December 30, 1933; and Katherine’s condition continued to be so precarious that it was doubtful she would survive through January.

Court papers said that George “repeatedly frightened and annoyed [Katherine] by appearing before her in an abnormal, intoxicated or drugged condition,” and interfered with the nurses.  When she was strong enough, Katherine fled the 77th Street mansion on March 5, 1934 and filed for separation.

George’s attorneys claimed she “willfully deserted and abandoned her husband.”

George’s mother had remarried and her husband, Colonel Dorsey Cullen, died on March 7, 1938.  She and her son liquidated the contents of the 77th Street house in preparation for its sale.  On January 22, 1939 The Times noted that the upcoming auction would include 18th century French furniture, English and French silver, Russian enamels, and artworks.

“The collection contains a number of pieces of French furniture by maitres ebenistes,” said the article.  “English silver of the sixteenth-eighteenth centuries includes an Elizabethan communion chalice and cover and a James I communion cup.  A small group of French silver includes a chiseled flagon by Jean-Baptiste Claude Odiot.  Russian enamels and silver include pieces by court goldsmiths Carl Faberge, A. Thielmann and Adler.”

The two-day auction took in $66,002.  Among the highest prices were paid for a Louis XVI bureau “understood to have been presented by Marie Antoinette to the Princess de Lamballe,” which brought $1,300; and a Louis XV piece by Adrien Faizelot Delorme which sold for $1,500.

The demand for vast Victorian private homes in the 1940s was, essentially, nil.  In 1945 Mrs. E. L. During began transforming old houses into apartments.  The New York Times wrote on October 14 that year “Mrs. During specialized in refurbishing old houses.”  Her renovations to No. 14 included removing the stoop and lowering the entrance to the former basement level, changing the original doorway into a window, and creating 12 apartments.

The most celebrated of the tenants here would be Woody Allen, who moved in during the summer of 1962. 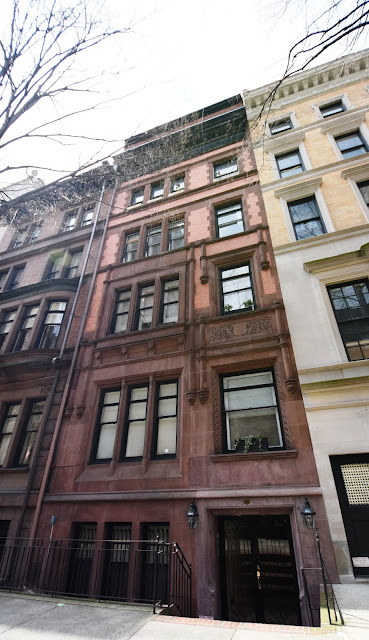 Despite the 1945 alterations and the 1920 rooftop addition; the house retains its architecturally interesting and dignified appearance, offering little hint of the sometimes scandalous lives that played out inside.