In 1875 the four-story brownstone house at No. 22 East 54th Street was completed.  The block between Fifth and Madison Avenues was lined with similar prim and respectable houses.  No. 22 became the home of Rev. Augustine David Lawrence Jewett and his family.

Born in Wilkesbarre, Pennsylvania, Jewett had married Elizabeth, the daughter of Rev. Dr. Richard W. Dickinson, in 1856 at the age of 26.  They had five children.

The son of Admiral David Jewett, he had graduated from Williams College in 1852, and then took a four-year theology course at Princeton Seminary.  After graduation, he spent settled at Piermont-on-the-Hudson; but “three years of labor in open-air preaching cost him his voice,” according to a Williams College history compiled in 1881.

After a year’s rest Jewett took up preaching again, spending much time with the Union soldiers at Fort Schuyler and David’s Island.  Following the war he took the pulpit at the First Presbyterian Church in New Brunswick, New Jersey.  He would not have ended up on East 54th Street were it not for a serious case of sunstroke and subsequent “nervous prostration” in September 1874.

Now essentially retired, The New York Times described him as “a man of large wealth.”  But Jewett’s life was filled with tragedy beyond the sunstroke of which the newspaper said “he never entirely recovered.”  In March 1879 the house was the scene of the funeral of Elizabeth’s mother, Margaret Coleman Dickinson.  It would be the first of many here.  By 1881 three of his children were dead.  In 1888 Elizabeth, known by friends as Eliza, also died in the house.  Her death seems to have prompted the grieving reverend to leave.

Later that year Jewett leased No. 22 East 54th Street to “the Misses Grinnell.”  The sisters lived in the house and operated the Grinnell School here.  An advertisement in the New-York Tribune on September 18, 1888 noted that their “Day School for Girls” would open on October 2.

Established in 1879 the Grinnell School provided privileged girls the instruction they would need to function in polite society.  One of the Grinnell sisters noted in 1895 “While French is the language of the school, especial attention is given to English.”  Students received classes in “art, history, literature, and science.”

The sisters remained here until the end of the 1896-97 school season, when they relocated the school to Boston.  On July 3, 1897 the Boston Evening Transcript noted “The Misses Grinnell, formerly Principals of School 22 East Fifty-fourth st., New York, will sail for Europe October 1st.  They will chaperon young ladies who desire to spend eight months in study in France and Germany.”

With the school’s departure, Rev. A. D. Laurence Jewett moved back into the 54th Street house.  By now only one son, R. Dickinson Jewett, was living.   But his return would be short.  On Friday night, April 29, 1898 Jewett died in the house “of general debility” at the age of 68.  The New York Times called him once “one of the most popular and eloquent divines in the Presbyterian Church.”

When Ethel married Arthur Keeler Bourne in St. Thomas’s Church on April 16, 1903, a reception was held in the 54th Street house.  The fashionable guests could not have guessed that all was not serene in the Hollins household.

But that would become quite clear in November 1908 when Hollins had his 34-year old son arrested.  In court he testified “that his son had squandered not less than $500,000, was running around with a crowd of dissolute men and women, had made his life miserable for five years, and was now keeping him and the rest of the family in a state of terror.”

Hollins riveted the courtroom with reports of De Ruyter’s returning to the 54th Street house on certain nights and “If he had no key he would break his way into the house.  He would demand money, and often raise such a disturbance that the police had to be called.”

The most disturbing episode occurred in 1906 when, according to Hollins’ testimony, “He broke into the house, found a loaded shotgun, and then came to me in the study.  He commanded me to march, pointing the gun at my head.  I was alone in the house, except for the servants, who were in the basement.”  The arrival of Celine and the Hollins girls defused the situation.  But another time Hollins found himself at gunpoint in the vestibule of the house; and later De Ruyter appeared in his father’s office, seized a heavy chair and demanded “Now, you give me $500 or I’ll knock your block off.”

During his trial, De Ruyter charged his father with criminal libel.  He told a reporter “Other than that I have nothing to say.  Put that in the papers.”

The ugly affair ruined the lives of the Hollins family.  Following the messy court case they moved out of the 54th Street house in 1909.  Celine and her daughters relocated to Lakewood, New Jersey; while Frank rented a third-floor room on West 138th Street.  It was there on March 4, 1909 that he committed suicide.

By now the 54th Street neighborhood was suffering the influx of commerce.  R. Dickinson Jewett, now living in Nyack, New York, leased No. 22 East 54th Street as a business building.  In the summer of 1913 he commissioned architect W. H. Spaulding to convert the house “into stores and studios” at a cost of $15,000.

Jewett apparently had a change of heart.  On January 10, 1914 the Record & Guide commented on the “new 6-story store and loft building being erected at 22 East 54th Street.” The fifth floor had already been leased to George P. Reinhard “a designer of classic interiors.”  The periodical noted “This adds another well-known decorator to this rapidly growing art centre.”

The limestone-faced Jewett Building was completed later that year.   A pair of two-story columns flanking the entrance dominated the design with an ancient temple-like feel.

Another interior decorator, H. Klingenfeld, moved in to the newly-completed building, while Patrick and Annie E McMoran took the store and basement.  Their shop, called Annie E. McCarthy, dealt in “worsteds and furniture.”

The building was threatened on April 22, 1926 when fire broke out in the Aeolian Building under construction at the corner of Fifth Avenue.  The New York Times reported “Sparks flew thickly, and it was not long before word was received that the roof of the Jewett Building at 22 East Fifty-fourth Street was on fire.”  Fortunately fire fighters responded quickly and little damaged was done.

At the time Thomas & Atwood was selling “coats for women and children” in the building.  In 1939 the Parisian “hand knitwear business” of Eileen Rice took two floors.

In 1932 an Irish restaurant named Reidy’s had taken over the ground floor space.  An anomaly in the ritzy neighborhood of high-end jewelry stores, art galleries and fur salons, the restaurant owned by Maurice Reidy offered pub food like corned beef and cabbage, calves’ liver, and prime rib.

On September 13, 1948 The Times announced that “An old East Side holding that had been in one family ownership since 1878 passed to new control.”  The Jewett Estate sold No. 22 East 54th Street to the United Negro College Fund.  An announcement explained “The penthouse and fifth floor are vacant and are expected to be occupied by the United Negro College Fund, along with the other three floors, none of which is held on lease.  The store is occupied by Reidy’s Restaurant.”

The United Negro College Fund and Reidy’s Restaurant coexisted for decades.  In 1968 The Times food critic Craig Claiborn described Reidy’s as “a long, narrow, informal place with water colors, portraits, and caricatures on the wall.  The tables are close together and some of the banquettes are not for solid comfort.  Nevertheless, the welcome is courteous and warm, the food is reasonably priced and in a town like Manhattan that has its virtues.”

But in 1978 Reidy’s Restaurant was threatened when the Robert V. Tishman and Jerry I. Speyer, general partners of Tecco Properties began assembling a 47,000-square foot building site, including No. 22 East 54th Street.  The building by now had become a commercial condominium.  The developers bought out all the owners except Maurice Reidy, who refused to sell.

The David and Goliath drama finally came to what was no doubt a reluctant compromise on the part of Teeco Properties.  In October 1979 construction on the 43-story office building began.  Carter B. Horsley reported in The Times “The tower, which will be clad in a red-and-black granite known as Canadian brown, will be built over and around Reidy’s Restaurant…which refused to sell its property to make way for the new skyscraper until recently.”

The top four floors of No. 22 East 54th Street were demolished and the new tower, designed by Swanke Haden Connell & Partners, engulfed the old Reidy’s Restaurant portion.  During construction Maurice Reidy hung a sign outside his business:  “Reidy’s Restaurant will stay at this location and will remain OPEN while the men play with their erector set.  Thank you.”

With the retirement of Maurice’s son, Bill Reidy, in July 1995, the venerable Irish pub closed.  The Times said it “will be replaced by a brewery-restaurant with Asian food that is being budgeted at $1.5 million.”  The Typhoon Brewery moved into the two floors so long occupied by Reidy’s.  New York Magazine described it in May 1997 as “amazing Thai-accented food on top and a noisy, spacious bar below.” 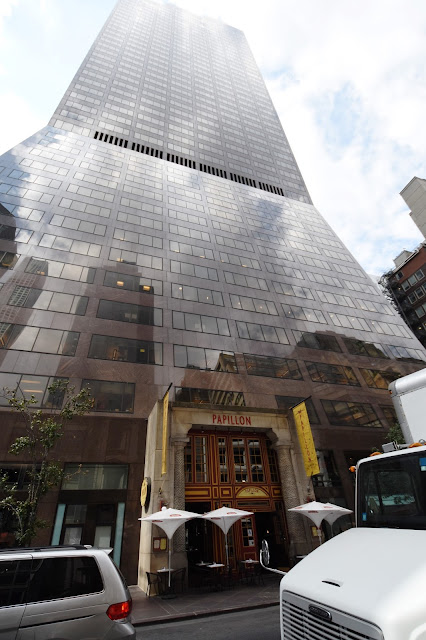 Today the space is home to Papillon Bistro & Bar, an upscale restaurant with little in common with its Irish predecessor.  The two-story remnant of the 1914 Jewett Building incongruously remains, jutting 10 feet from the tower's facade--there because a feisty Irish pub owner refused to surrender to powerful developers.

many thanks to reader Jeffrey Austin for suggesting this post
photographs by the author
Posted by Tom Miller at 3:25 AM