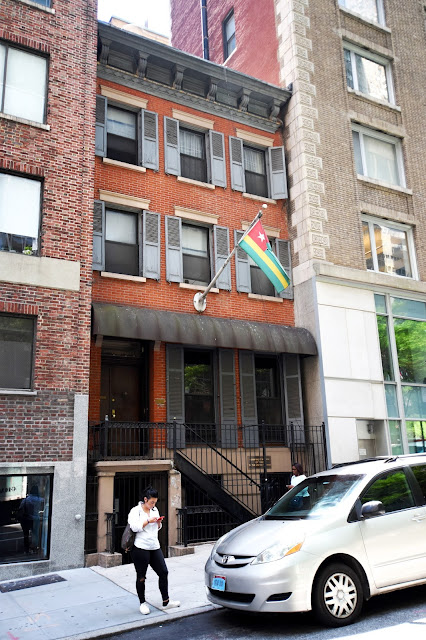 In the decade before the outbreak of the Civil War the Murray Hill neighborhood—once the country estate or wealthy Quaker merchant Robert Murray—was quickly filling with high end residences.  Just above the northern fringe of Murray Hill the Morse family lived at No. 112 East 40th Street.

Twenty-feet wide and faced in common bond red brick, the three-story Italianate house was trimmed in limestone and sat above a rusticated stone basement.  While certainly not a mansion, it displayed elements that revealed its owners were financially comfortable.  Floor-to-ceiling parlor windows (which may have once been fronted by an Italianate iron balcony), molded lintels and a superb bracketed and paneled cornice were fashionable details.

The Morse family may have hoped they were safe from the terrifying diseases, like yellow fever and cholera, which plagued the crowded neighborhoods to the south.  But tragedy nevertheless came to No. 112 East 40th Street in 1853.

William Richmond Morse was stricken with tuberculosis, called consumption at the time.  The disease was essentially a death sentence in the 19th century and on Saturday, September 3, 1853 the 22-year old died “of a lingering consumption” in the house.  His funeral was held in the parlor two days later.

Soon afterward the Morse family left East 40th Street.   The house would have several owners throughout the rest of the century and several more funerals.

Like William Richmond Morse, the next owner, John Campbell, died of consumption here on Sunday, December 31, 1855.  His funeral was held at noon on New Year’s Day.  Ann Carpenter, the widow of Chester C. Carpenter, lived here until her death on Saturday, November 1, 1862.  She was 74 years old.

And on Thursday evening, March 9, 1871 John Archibald Kyle died in the house.  A Civil War veteran and member of the Philharmonic Society and of the Old Guard (the 3rd U.S. Infantry Regiment), his funeral on afternoon of Sunday March 12 would be a colorful one.

On March 10 George M. McClean, commandant of the Old Guard, issued a notice that “The members will assemble at armory of Seventy-first regiment, 118 West Thirty-second street, Sunday, at twelve o’clock, in full uniform, to attend the funeral of our late comrade, John Archibald Kyle.”

The following day The New York Times reported “The funeral of the late John Archibald Kyle, an accomplished musician, took place yesterday afternoon from his late residence, No. 112 East Fortieth –street.  The musical profession were well represented, and the members of the ‘Old Guard’ assembled in full uniform and attended the services as a mark of esteem for their late comrade, and paid him the usual military honors.”

On Wednesday, April 26 Kyle’s furniture was sold at auction.  Bargain hunters crowded into the house that morning at 11:00.   The costly furnishings sold that day included “walnut, mahogany Suits, Brussels and Ingrain Carpets, etc., together with the Kitchen Furniture.”

The day before the auction the house was advertised “to let, unfurnished, the desirable three story high stoop brick House 112 East Fortieth street.”  The potential occupant would pay $1,800 a year for the house—about $3,000 a month in 2016 terms.

Interestingly it was a real estate agent, W. A. Tooker, who moved in, living and working from No. 112 at least through 1873.

It was either the Tooker family, or the next family, that of Dr. William E. Bullard, who advertised for a maid in January 1875: “Wanted—a young Protestant girl to do general housework in a small family.”

The house would have at one more occupant—E. C. Murray, who was an avid stamp collector—before Albert L. Webster purchased it in the first years of the 20th century.  A member of the Franklin Institute, Yale Club, American Society of Civil Engineers and the Century Association, Webster was a highly-regarded consulting engineer.

Born in Orange, New Jersey on August 3, 1859, the son of Benjamin C. and Eliza Webster, he had graduated from Yale’s Sheffield Scientific School in 1879.  He immediately joined the U. S. Geological Survey to explore and map the uncharted Far West.

When the construction of subway tunnels caused concern for public safety, Webster was appointed by the City as one of two engineers of the “Safety Committee.”  The group was tasked with investigating the project and making recommendations where changes were necessary.  His note-worthy career would include his role as consulting engineer for the construction of monumental New York buildings like Grand Central Terminal, the New York County Court House, and the Woolworth, Municipal and Equitable Buildings.

Albert’s wife Mary, was the daughter of broker Cyrus J. L. Lawrence.  She was born at No. 81 Park Avenue, coincidentally just one block away.  With them in the house were their children, Benjamin and Aileen; Albert’s widowed mother, Eliza; and Vivian Bevans White and her husband, the socialist, reformer and artist Hervey White.

On July 12, 1909 The Sun reported “Mrs. Hervey White, an artist, of 112 East Fortieth street, was run down at 3 o’clock yesterday afternoon at Fifty-seventh street and Broadway by a young man on a bicycle and was badly bruised.  She was taken to her home in a taxicab and is under the care of a physician.”  Coincidentally, Nathan Sodi, the 19-year old cyclist lived relatively nearby at No. 120 West 40th Street.  The newspaper explained “Mrs. White, who was a Miss Lawrence, and her husband are living with Albert L. Webster and his wife, who is Mrs. White’s sister.”

The newspaper apparently got the relationship decidedly wrong.  Vivian White was a friend of Mary; not her sister (her two surviving sisters, Emily and Theodora were married and not to Hervey White).  The two couples knew each other, most likely, because the Websters maintained a summer house in the Catskills, where White had established Byrdcliffe, an artists' colony, with Ralph Whitehead.

Like Vivian, Mary Webster was cultured and artistic.  She was one of the founders of the Cosmopolitan Club in 1909, “a place where accomplished women in the arts and letters gathered to socialize, exchange ideas and enjoy one another’s company,” according to the Club’s description.

The first funeral in the house for many years occurred in October 1912.  Eliza C. Webster died in the house on Thursday, October 10 at the age of 90.

The Whites were not the only artists in the house.  Albert L. Webster’s softer and more artistic side came to light when he composed a series of stories centered around a boy named Caleb.  Although they were originally intended for his children, he later illustrated and published them in the volume Caleb or Curious and Diverting Adventures with the Friendly Animals Beyond the Hills of Night.

His “Prologue for Parents” hardly sounded like the work of a sanitary engineer.  “This is not a dream story.  It is an imagination.  It is not intended to instruct.  It is a flight of fancy without relation to truth or fact.  Within it all or nothing may be believed.  If any children are interested, and are happy in being Caleb’s companions to the land beyond the hills there will be in the world another contented family animal.”

By the end of World War I Albert’s brother, Benjamin moved in with the family.  He died at the age of 64 in December 1922 and, once again, the door to No. 112 was draped in black crepe and a funeral was held here.

By the time of the Great Depression the 40th Street block had seen major change since the Webster family moved into No. 112.  Commercial and apartment buildings had replaced all of the former homes—all except the Webster house.  But Mary and Albert refused to concede to the passage of time.

Two days after Albert died in the house at the age of 70 on March 24, 1930 after a brief illness, his funeral was held in the parlor just as so many had been before. Mary L. Webster remained here alone for another seven years.  In October 1937 she leased the private house to E. M. Jette “for occupancy.”  Mary died in 1944.  By now Aileen was married to Commander Edward D. Payne of the United States Navy and Benjamin was living in Alexandria, Virginia, working with the War Production Board.

With Mary’s death the fate of No. 112 East 40th Street was sealed.  By 1950 the C. F. Hathaway Company was in the building.  That year it announced that “the first nationally distributed line of shirts made of imported Viyella since the war will be put on display.”  Viyella was described by the firm as a “flannel fabric made of lamb’s wool and Egyptian cotton.”

The century-old house was given an elevator in 1951 and converted to offices.  Over the next few decades it would see several tenants, including the record distributor, PACE, in the 1960s; and Ron Greenberg Productions in the early 1970s.

Today the Webster house serves as the Togo Mission to the United Nations.  The widening of 40th Street resulted in the removal of the stoop and a sideways iron replacement installed, as well as a new entrance to the basement.  And yet the charming house, sandwiched between hulking 20th century buildings, is otherwise little changed.  A remarkable hold-out from a far different time.