The Ernesto and Edith Fabbri Mansion -- No. 7 East 95th Street 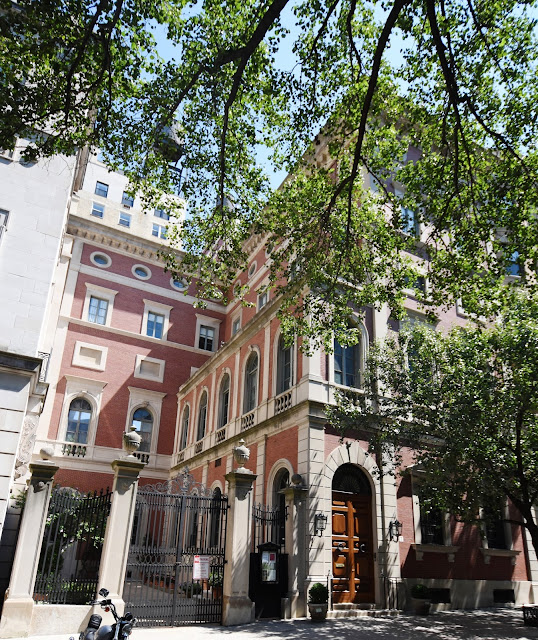 In 1899 Edith Shepard and her husband Ernesto Fabbri moved into a grand mansion at No. 11 East 62nd Street.  The house was a gift from Edith’s mother, Margaret Louisa Vanderbilt Shepard.

The great-granddaughter of Commodore Cornelius Vanderbilt, Edith Shepard Fabbri was expected to entertain lavishly--and she did not disappoint.  And while Edith was busy with her social routine, Ernesto worked in the financial firm of Drexel, Morgan and served as president of the Society of Italian Immigrants in New York.  Just seven years after moving into the new house, Fabbri was transferred to Europe by Drexel, Morgan.   The couple would live overseas for several years.

The Fabbris apparently anticipated their return to American when on November 1912 the Record & Guide reported that Ernesto Fabbri had purchased a 100-foot wide plot on the north side of 95th Street, just off Fifth Avenue.  The journal noted a trend in the sale.

The publication felt that the movement of millionaires this far north was due to “the increased use of motor cars” and predicted that “this section of 5th av. Is about to come in for a great revival of interest.”

Less than two months later the Fabbris had chosen their architect.  The Record & Guide reported on January 11, 1913 “Mr. Fabbri has arranged with Grosvenor Atterbury to build a 50-ft house for his use.”  While Atterbury’s name appeared on the plans, he worked closely with Ernesto Fabbri’s architect and interior designer brother, Egisto Fabbri.

The plans were not prepared until October that year; with the Fabbris still in Europe.  They called for a 40-foot wide “five-story brick and marble residence” with an estimated cost of $150,000—in the neighborhood of $3.7 million in 2016.

There seemed to be little rush to start construction; however the Fabbris’ return to New York was most likely hastened both by the outbreak of war in Europe in July 1914 and daughter Teresa's rapidly-approaching debut.  Nevertheless, the contractor was not chosen until January 1915.

By now the neighborhood was filling with costly mansions, including the striking Carhart residence at the corner of Fifth Avenue.  Although Ernesto sold half of his plot, abutting Marion Carhart’s property, to Goodhue Livingston, his house never came to be.  The unused lot happily provided unexpected sunlight and air to both the Carhart and Fabbri mansions.

The Fabbri house was completed late in 1916—just in time for Teresa Fabbri’s debutante entertainments.  Unlike their ornate French confection on East 62nd Street, the new Fabbri mansion was restrained and dignified.  The red brick façade was highlighted by white marble elements.  Ernesto Fabbri’s Italian roots were reflected not only in the architecture, but in the interiors.  The Living Church reported decades later “The interior of the first and second floors came from the Ducal Palace in Urbine, Italy.”

The Fabbri coat of arms featured a raised arm holding a hammer.  It was repeated in the ironwork of the ornate entry gates and throughout the house, carved into mantels, and even in the design of the dinnerware.  It has been suggested that the L-shape of the residence reflects the bent arm of the Fabbri crest.

On January 6, 1917 the doors to the new mansion were thrown open for a lavish dinner dance for Teresa.  Among the 300 guests were “the debutantes and young dancing set, with a sprinkling of young married people and a very few of the older friends of Mr. and Mrs. Fabbri,” wrote The New York Times.

The wealthy crowd was served dinner in the dining room, and following the dancing, enjoyed a “seated supper” at 1:00 in the morning.  While they ate, “Hawaiian musicians sang and played.”

James Clark was a graduate of Harvard and was a lieutenant serving with the aviation section of the Signal Corps in San Antonio, Texas.

Almost a year to the day afterward, the New-York Tribune reported on November 17, 1918 that the “stork visits the Clark home.”  In 1918 wealthy women did not go to hospitals to have their babies; the doctors came to them.  And so with Lt. Clark serving in the Army Air Service, Teresa’s baby was born in the Fabbri mansion.

Entertainments in the 95th Street house were often centered around war relief and political causes.  On February 8, 1920 The Sun reported “At a meeting to be held on next Sunday afternoon in the home of Mr. and Mrs. Ernesto Fabbri at 7 East Ninety-fifth street, a scheme for international charitable effort will be unfolded and a noted priest and orator will be introduced.

The “noted priest and orator” was Padre Semeria.  He lectured on “Dante’s Ideal of Civilization” as a benefit for the war orphans of southern Italy.  Edith also arranged for a “programme of old Florentine music.”

By now Ernesto’s brother, Alessandro was living in the house, along with the Fabbris’ staff of 11.  The 43-year old had never married and The New York Herald pointed out that he “made his home with two brothers, Egisto and Ernesto.”  Alessandro’s decision not to have his own home was not based on financial difficulties or a lack of success.

The Herald described him as “a pioneer in the use of motion pictures in scientific research.”  He developed a microscopic motion picture process which he demonstrated by recording the growth of life in an egg.  During the war he built a large wireless plant in Maine at his own expense, and then offered it to the Government.  The military declined the offer, purchasing it instead, and hired Alessandro as its head with a staff of several hundred.

Edith was politically active.  On January 15, 1920 James W. Gerard, former Ambassador to Germany, spoke to about 100 women in the mansion.  He said that “the women of the country would be the deciding factor in the next Presidential election,” and added “If you ladies were Senators the League of Nations would be settled in a week and the treaty agreed on.  Women are more practical than men.”

An entertainment of note took place in the mansion on May 24, 1921.  The Duchesse de Richelieu gave a “song recital” that afternoon for the benefit of Madame Clemente Bologna, the widow of a recently-deceased voice teacher.  The New York Herald pointed out “Through her recitals given during the war the Duchesse raised several hundred thousand dollars for tubercular soldiers of France.”

Alessandro Fabbri died in the 95th Street house after an illness of just three days on February 6, 1922.  The scientist was 45 year old.

Although Ernesto Fabbri was still living here in 1924, Edith was apparently still in Europe.  In February 1923 she obtained a Paris divorce and “three months later Mr. Fabbri married Miss Mary Valentine Darrah, of Overbrook, Pa.,” as noted by The New York Times.

On Christmas Day 1924 Prince Sergio Romanovsky, Duke of Leuchtenberg arrived on the Italian steamship Duilio.  The New York Times noted “The Prince has come for a visit of two months with Ernesto Fabbri, 7 East Ninety-fifth Street.”

Edith received the 95th Street mansion in the divorce settlement and resumed the upscale entertainments here.  December 1937 was an especially busy month.   On December 18 Edith gave a ball for her debutante granddaughter Edith Fabbri Clark, deemed by The New York Times to be “one of the largest debutante parties of the season.”  Two days later she hosted a benefit recital for the Soldiers and Sailors Club of New York on December 20, 1937; and two days after that, on December 22, she hosted another ball for her debutante grandniece, Anne Louise Schieffelin.

The New York Times reported “Dancing took place in the spacious library…on the upper floor, the room having been converted into a ballroom for the event.”  The writer made special note of the Della Robbia-type garlands of real fruit which hung from the walls and shelving.  The garlands were “in harmony with the Italian furniture and paintings, which, throughout the house are mainly of the Renaissance period, although some of the decoration suggests the Tuscan school.”

The article noted “Mrs. Fabbri’s house was built a little more than two decades ago, many of the materials of construction, as well as the furbishments, having been brought from Italy.”

In 1949, at the age of 77 Edith Shepard Fabbri donated her home to the Episcopal Church of New York “to promote spiritual retreats.”  On December 18 The Living Church reported on the gift, saying “The house is one of the notable houses still standing in New York.”  Edith not only donated the mansion, but the artwork and furnishings.

“The library will remain much as it is,” said the report, “Mrs. Fabbri left many of the books in place.  The drawing room will be made into a chapel…The house has been adapted to the purpose of a retreat house, without in any way altering its architectural beauty.  The fourth floor has been made into a convent for the Sisters, quite apart from the rest of the house.”

The article explained “The name, House of the Redeemer, was chosen because a church once standing in the neighborhood and attended by Mrs. Fabbri bore that name.” 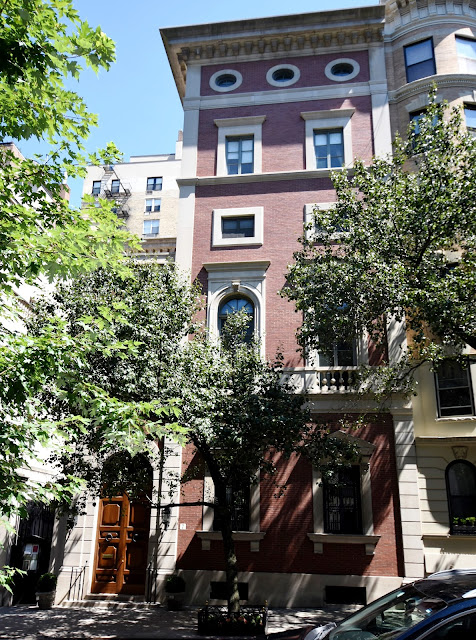 More than half a century later the House of the Redeemer continues on in the Fabbri mansion.  Its tender maintenance of the structure has preserved its original appearance.