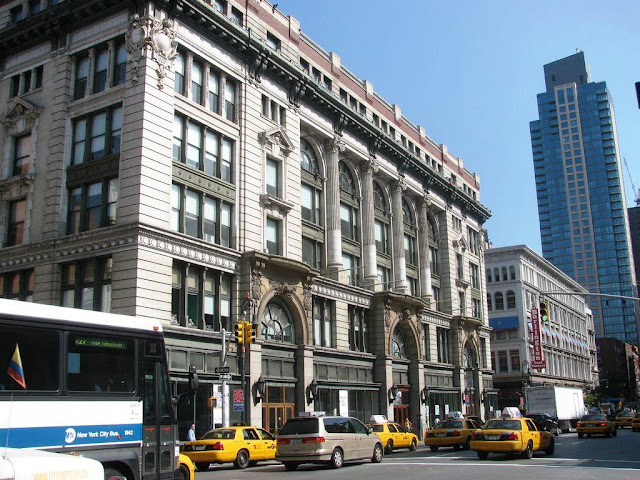 http://www.flickr.com/photos/edenpictures/3709077714/
Samuel Adams had made a name for himself in Colorado before returning to New York City in the 1880s. There he not only owned a silver mine, but was elected to the State Senate.

Adams opened an important dry goods store at the north end of The Ladies Mile at 675 6th Avenue, between 21st and 22nd Street. While his neighbor to the south, the Hugh O’Neill Dry Goods store, sold moderately-priced goods, Adams & Co. catered to those women looking for more expensive and decidedly conventional merchandise.

By 1899 Adams’ business was so successful, with assets of $3.6 million, that a new and grander structure was necessary. He commissioned architects DeLemos & Cordes who were responsible for the palatial Siegel-Cooper store further south to design his new emporium. In sections, he began razing his store and rebuilding – precluding the necessity of closing his business and losing customers or sales.

On December 23 of that year The New York Times anticipated the six-story structure which would cover seven acres of floor space. “The new store will be in the Renaissance style of architecture, light colored materials being used in its construction, and it will be fireproof throughout. Three handsome entrances in Sixth Avenue will give access to the store, each flanked by pilasters of polished granite with artistic bronze scroll work. In the center of the store and extending to the fifth floor there will be a handsome and well lighted rotunda surrounded by ornamental columns and arches.

“Broad and handsome marble stairways will rise from the main floor, one from the rotunda and one from each street entrance. The large central stairway will lead directly to a richly decorated parlor for the convenience of women patrons and to the manicuring establishment on the second floor.”

Shoppers would find departments for women’s and children’s garments, a “commodious” restaurant, and a photograph gallery. A pneumatic tube system connected the sales floor to the offices, whisking away the customer’s cash and returning the change. To awe the turn-of-the-century shoppers, Adams had engineer Harry Alexander outline the rotunda in electric lights as a glittering nighttime display.

“When completed the building will be a noteworthy addition to the architecture of Sixth Avenue,” remarked The Times.

Actually, the completed building was Beaux Arts in style, not “Renaissance” as The New York Times had promised. It was, nonetheless, “noteworthy.” The great granite structure signified solidity and success. Four three-story Corinthian columns separated five recessed, arched windows above the second story. The restrained ornamentation bespoke of the high-quality merchandise within.

That high-quality merchandise within, as well as many of the high-quality shoppers, was injured when, at 5:00 on May 29, 1906, the 10,000 gallon water tank on the roof gave way and crashed through the stained glass skylight over the rotunda. Over 3,000 shoppers were in the store when the tank plummeted five stories to the dress department on the first floor.

In the panic that followed “many of the shoppers lost their purses and handbags, while some threw away their bundles and wraps. Some had their clothing torn…There was considerable screaming among the women when the accident occurred,” reported The New York Times.

Amazingly there were only a few serious injuries and, despite the three inches of water that covered the first floor and the $2000 damage to inventory, Adams & Co. was back in business within a few days.

That same year Samuel Adams merged with his neighbor to the south, the Hugh O’Neill & Co. Adams was growing older and his daughter Eileen, married to the son of John Phillips Sousa, was not interested in the dry goods business. With the merger, Adams would remain as President. A tunnel under 21st Street would join the two retail palaces.

Adams said “The individual management of the two stores will be as heretofore and nothing will be done to disturb the pleasant relations which have existed between them and their patrons. But the stores, occupying two city blocks, by combining their facilities, can offer greater attractions to the public than they have been able to do as individual units.”

Unfortunately, with the migration of the retail stores uptown, The Ladies’ Mile slowly declined. In 1913 Adams & Co. closed for good. The green and white marble rotunda, the scrolled metal work and the polished stone floors became home to small businesses and lofts.

In the 1920s Hershey Chocolate Company made candy here and two decades later it was home to the Central Time Clock Company, and other small industrial firms.

Finally, with the rebirth of the Ladies Mile in the 1980s, Israel Taub’s Chelsea Green took ownership and began a restoration, with input from the Landmarks Preservation Commission – although the building had not yet received landmark status. Architects V. J. Kale and Reginald Grasmick restored the exterior and reconstructed the central rotunda.

Mattel took over the top three floors, giving the Adams & Co. building the new name “The Mattel Building” and in 1994 Barnes & Noble Booksellers moved into the ground floor for a 14-year stay.

Late in 2010 Trader Joe's took over half of the ground floor space vacated by Barnes & Noble.  The Adams & Co. Building remains as dignified, beautiful and aloof as it did in 1900.
Posted by Tom Miller at 2:58 AM