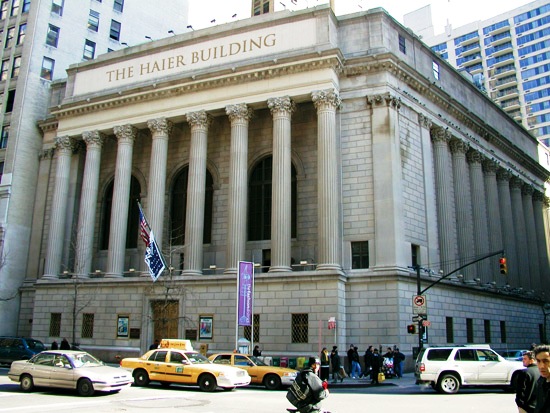 On July 31, 1893 business was not as usual for the Greenwich Savings Bank. The institution, which had started out as a small Greenwich Village bank, had grown substantially; and was now housed in an impressive Victorian building on 6th Avenue at 16th Street. 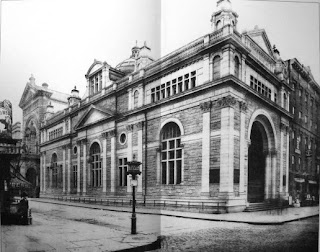 That day, as with the other banks across the city, there was a run on the bank caused by a temporary shortage of cash. “Women largely predominate as depositors in the Greenwich Savings Bank,” reported The New York Times, “…and although the majority of the depositors there were well dressed and apparently in good circumstances they seemed to be just as much excited as did the less fortunate-looking people in the crowds at the east side banks.”

The women tested the patience of Bank President James Harsen Rhoades. “There is absolutely no reason for a run on our savings bank,” he said. “People seem to have the idiotic idea that drawing money out of a bank is the best way to meet a panic. The fact is that it is the very way to increase it.”

Greenwich Savings Bank, as did the rest of the banks, survived the crisis and continued to grow. By the end of World War I the institution needed a new headquarters. On April 21, 1921 a plot of land was purchased from the Van Ingen estate for $1.5 million. The Times reported “The Greenwich Savings Bank, the third oldest institution of its kind in New York City, will build a monumental banking and commercial structure at the northeast corner of Broadway and Thirty-sixth Street.”

And monumental it would be. 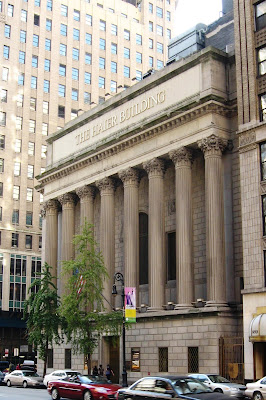 Architects Edward Palmer York and Philip Sawyer, renowned for designing bank buildings, were given the commission. Both architects had formerly worked for McKim, Mead & White and the classical tradition of that firm left its mark. They were faced with a difficult plot of land, an irregular quadrilateral formed by the diagonal orientation of Broadway as well as the downward slope of 6th Avenue towards Broadway.

Drawing inspiration from Imperial Rome, they created an epic Roman structure. The three exposed facades feature colossal Corinthian columns supporting a heavy corniced attic. The ground floor forms a rusticated base, punctuated by bronze-grilled windows and heavy bronze doors. Behind the colonnade on the Broadway side are three immense arched windows, while the 6th Avenue exposure has a single, central window. Using visual slight-of-hand, the architects managed to obliterate the building’s peculiar dimensions. 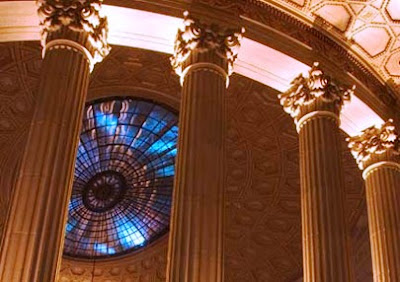 Photo GothamHallEvents.com
On May 17, 1924 “in armored-cars and under the protection of machine guns,” as reported  The New York Times, the bank moved its cash and securities to its new home.

The Greenwich Savings Bank remained in the building until 1980. Two decades later Chinese-based appliance and digital manufacturer, Haier America purchased the structure for its headquarters. The magnificent banking hall was stripped of its teller cages and bronze-and-marble transaction counters and renovated as Gotham Hall, an elegant and cavernous party venue. 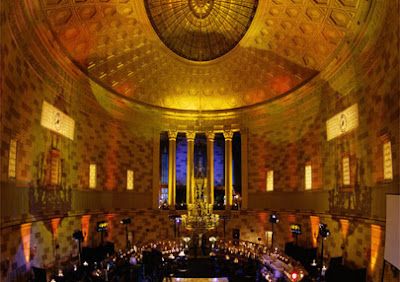 Photo GothamHallEvents.com
The monumental Roman building is bathed nightly in what Haier calls “showers of blue light.” The building is a designated New York City Landmark. 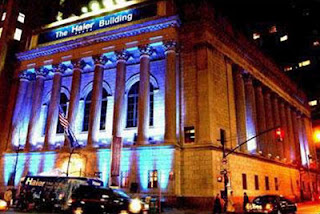 Photo by Haier
Posted by Tom Miller at 2:49 AM