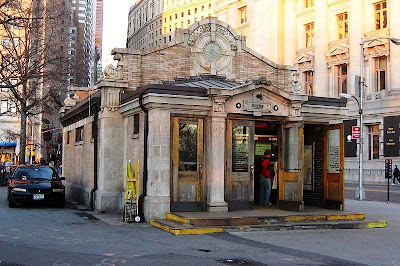 By the end of the 19th Century the New York City transportation system of elevated trains, trolleys and hansoms was overburdened. The State of New York, through its Rapid Transit Act of 1894, authorized the city to build a subway system and by 1900 plans were underway.


A year later the architectural firm of Heins & LaFarge were given the substantial commission of designing the stations. George Lewis Heins and Christopher Grant LaFarge (the son of eminent artist John LaFarge) had worked under Henry Hobson Richardson and opened their own office in 1886.

Working under the direction of Chief Engineer, William Barclay Parsons, the pair designed tiled-clad platforms with individual terra cotta and mosaic station signs – the show-stopper being the magnificent City Hall Station. However that station received one of the 133 ornate steel and glass kiosks modeled after the Budapest subway entrances.

At the Bowling Green station, they went a step further. 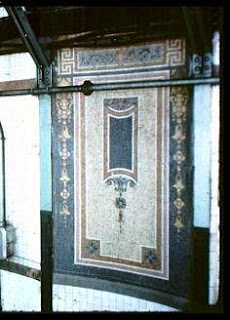 While Heins & LaFarge decorated the platform level with Pompeian-style wall motifs, they aptly echoed the Dutch history of the park in their entrance structure above. Called the “Bowling Green Control House” (in reference to controlling the passengers who passed through), it was a brick and stone Flemish Renaissance pavilion. Polychrome terra cotta panels and modest carved stone scrolls are the sole adornments of the unpretentious but impressive structure.
Through the oak doors of the Control House on the opening day of the subway, October 27, 1904, thousands of passengers passed. For a nickel fare they could ride the new underground trains throughout the city.

Four years later the Bowling Green Station was connected to Brooklyn. Passengers who formerly had to use the Brooklyn Bridge or a ferry could now be shuttled beneath the river. The first train left Bowling Green at 1:02 am on May 1, 1908. Despite the inconvenient time, scores of passengers waited to be taken to the neighboring borough and there was a massive parade to celebrate. 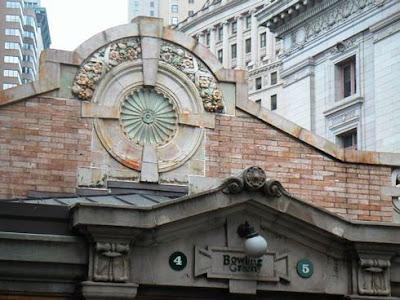 The New York Times reported the next day “Every band in Brooklyn has been engaged for the occasion, in addition to the various regimental bands, as the Board of Aldermen made a liberal appropriation for music. The business houses and residences along the route will be decorated with flags and streamers, the streets will be illuminated by searchlights, and red fires at various points, including the grand stand, which has been erected at Grant Square.” 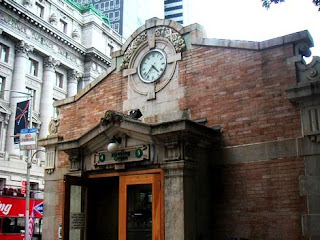 North (rear) entrance
For the convenience of local workers the Control House was outfitted with a check stand where overcoats and packages could be left while conducting business. Here, on August 19, 1916, a man checked a suitcase for Hans Edward Thompson. The gentleman was unaware that he was being followed by Customs Inspector Walter P. Murphy.

Thompson, whom The New York Times called “a stocky man with a foreign accent…past middle life,” had smuggled $25,000 worth of stolen gems into the country. When the U.S. Customs received a tip, Murphy was put on the case.

The Times reported “He found Thompson, and a watch was set upon him. Evidence will be presented, it is said, to show that Thompson, becoming certain that he was under surveillance, got a friend to take the suit case on Tuesday and check it at the Bowling Green subway station.”

Thompson was arrested and the smuggling plot ended.

In 1973 the Bowling Green Control House was designed a New York City Landmark. It is listed on the National Register of Historic Places and remains one of the few similar masonry and brick subway entrances surviving from Heins & LaFarge’s original designs.
Posted by Tom Miller at 3:30 AM