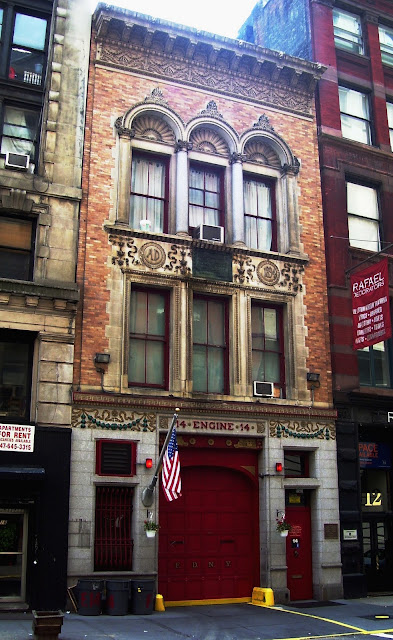 Just prior to the outbreak of the Civil War, Philadelphia architect Napoleon LeBrun moved his family to New York City. LeBrun won the enviable position as official architect of the New York City Fire Department in 1879. A year later when his son Pierre joined him in business, it became LeBrun & Son. In 1888 younger son Michel would also join the firm, subsequently renamed LeBrun & Sons.


Unlike the work of Nathaniel D. Bush, the architect for the New York Police Department during the same period, who created several carbon-copy station houses; LeBrun’s fire stations were nearly all unique. Each of the 42 LeBrun stations became progressively more ornate and in 1894, a year before designing their final firehouse, Engine Company 14 was erected at 14 East 18th Street.  The architect had gone all-out.

“High above,” said the AIA Guide, “the frieze and cornice are rich in far-out, far-east detail.”

On September 11 the next year, Mayor A . Krebs and the Fire Commissioner escorted Colonel Varigault, the head of the Paris Fire Department, on a tour of New York fire headquarters. The French fireman was visiting New York to learn up-to-date practices and technology. The party then boarded carriages and “inspected the quarters of Engine Company No. 14,” according to The New York Times.  The sparkling new station house was presented as the typical example of New York fire stations.

As evidenced by the 1896 station blotter, the Victorian fire fighters assigned to Engine Company 14 were not without a tender side. On July 22 of that year the blotter read “5:00 A.M. – Peter, cat, transferred to Bergh Society.” Peter had unfortunately eaten a poisoned rat.

A month later an entry documented “Aug. 25, 11:25 A.M. – While responding to an alarm for Station 343, Chops, cat, jumped from seat of tender at Broadway and Eighteenth Street, and was killed by being run over and having neck broken.”

The New York Times reported the next day “There was a sort of a wake over Chops at quarters last night, and a debate about the funeral. Arrangements were not perfected, but the cat will not be sent to the Potter’s Field for its kind – Barren Island. Fireman 'Joe' DeSize and Engineer A. W. Melvin are to devise a plan of last honors.”

For over a century the firefighters of Engine Company 14 have served the city valiantly, sometimes at the price of life. In 1956 Company No. 14 fought the tremendous Wanamaker fire on Broadway and Astor Place for a full day before bringing it under control.

LeBrun’s Italian Renaissance structure is as delicate and beautiful today as it was in 1894, still serving the city as an active fire house.
Posted by Tom Miller at 3:00 AM