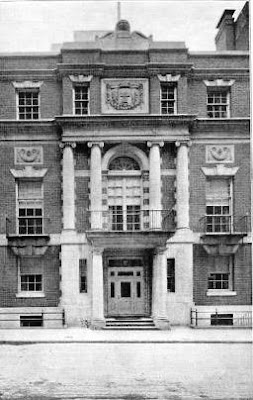 As the Civil War was coming to an end, four New York City alumni of Harvard University banded together to form a club. The golden age of men’s clubs was dawning, a time when no gentleman of the city would be without at least one exclusive club membership.

By the end of 1865 membership had increased to 16 and by 1886 it totaled 431. Meeting in rented dining rooms in tasteful restaurants was no longer feasible. In 1887, the same year that the Harvard Club incorporated, a four-story brownstone at 11 West 22nd Street was rented and converted to a 10-bedroom clubhouse complete with restaurant and comfortable clubrooms.

The Harvard Club continued to be a victim of its own success. Within a year membership had increased 25 percent. The new clubhouse was proving, already, to be insufficient. A plot of land at 27 West 44th Street was acquired in the fashionable neighborhood where other clubs were already establishing themselves. Club member Charles F. McKim, head architect of McKim, Mead and White, took on the project of designing the new structure.

At a dinner for 500 members and guests held at Delmonico’s, club president Edward King spoke of the anticipated clubhouse. The New York Times reported that King promised there “would be ample accommodations for the Harvard baseball nine, the boating crews, and the football team. This announcement brought the Harvard men to their feet, and three time three ‘rahs were given with a will. A score of pretty women in the gallery smiled their encouragement.”

Drawing inspiration from the early architecture of Harvard, McKim designed a neo-Georgian manor house of dark red “Harvard brick” and limestone. The dignified face featured splayed window lentils and inset plaques of bas-relief swags. The Harvard seal sits prominently above the second floor balcony. The symmetrical arrangement of small-paned windows, Doric columns and a central, arched window dominating the second floor bespoke of the taste and refinement of the members. 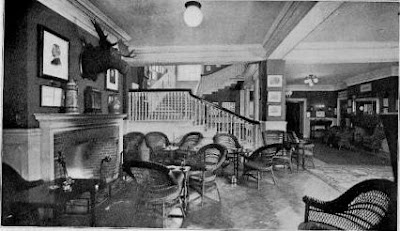 Having learned from the rapid obsolescence of the last clubhouse, individual members purchased the lots at No. 31 and Nos. 26 through 36 in anticipation of necessary expansion. It was agreed that the land would be sold to the club at cost.

Indeed, in 1905 the first addition to Harvard House was constructed to accommodate the growing membership. Added to the rear, it included the magnificent, three-story Harvard Hall, a library, billiard room, grill room, a conference room and sleeping quarters. 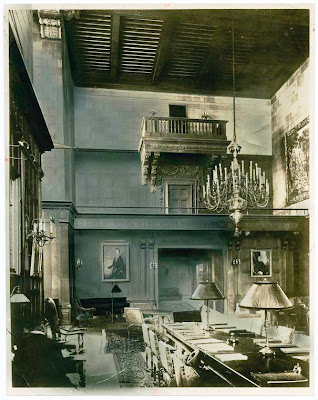 The Harvard Hall
The club that could not stop growing was in need of additional space by 1915. McKim added a seven-story tower to the west end. The extension provided for a new formal dining room, banquet rooms, a swimming pool and squash courts, additional bedrooms and a bar; not to mention up-to-date amenities such as elevators and steam heating. 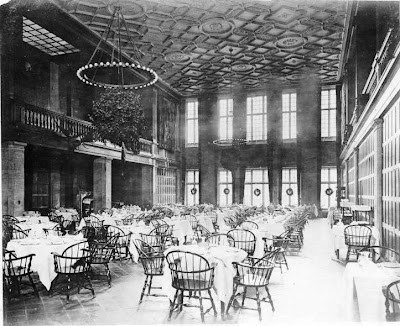 The new formal dining hall
Only a decade later the growing membership was taxing the capacity of the structure again. With no more land, the club initiated negotiations for No. 33 West 44th that dragged on for six years. Unfortunately, by the time the deal was finalized the Depression halted all plans for construction. As the Great Depression ended and World War II began, the swimming pool area was floored over to create more sleeping rooms. 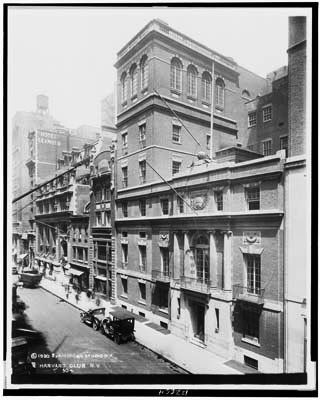 The Harvard Club in 1930
After the war, the upper three stories of the house at No. 33 were demolished and the remaining two floors were renovated as an extension. An architect club member redesigned the façade to meld with the McKim exterior; with little critical acclaim.

The foundations of the staid club were shaken when, in January 1972, women were admitted to Harvard University for the first time. The question was obvious: if women were to become alumnae, would they therefore be eligible for membership?


A vote was taken on March 4, The Times reporting on the outcome the following morning. “The Harvard Club, the last of the city’s traditional all-male Ivy League university clubs, voted last night to stay just that way – a 107-year old monument to male exclusivity.”
That 107-year old monument was about to tumble, however. In January of the following year a second vote was taken with the overwhelming outcome of 2097 to 695 to accept women. 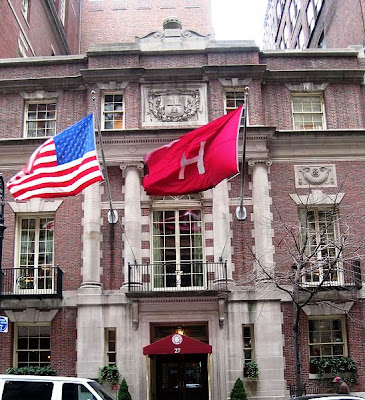 For over a half-century the Harvard Club has made no additions to its structure. The landmarked building that could not stop growing, just possibly has.
Posted by Tom Miller at 2:47 AM