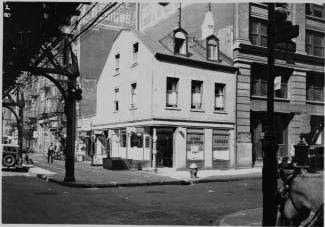 Photo NYPL Collection
﻿
Elsewhere in the city in 1809 houses in the new and fashionable Federal style of architecture were rising.  Gideon Tucker, however, preferred the traditional 18th Century Dutch style for his residence.

Tucker was a successful businessman and politician, a partner in the Tucker & Ludlum plaster factory, school commissioner, Commissioner of Estimates and Assessments and an Assistant Alderman. His property, on which his factory sat, was considerable. When White Street was laid out across his land in anticipation of residential development, he built his modest but comfortable home at the end of the block at West Broadway. 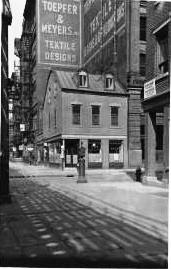 No. 2 White Street, in all probability, always had a store on the ground floor with the residential area above. Build of brick and wood, it featured a distinctive gambrel roof familiar in the earlier Dutch homes, splayed stone window lintels, and handsome prominent dormers.

Despite his substantial wealth, Tucker apparently remained in the unpretentious house until he died in 1845. He left a large amount of real estate, including one plot between the Bowery and 5th Avenue, from 10th to 12th Streets, which sold for $1,250,000.

As the neighborhood around it changed, the little house at No. 2 White Street went through a multitude of uses; reportedly having a dance hall called “Shadow City” in the basement around the time of the Civil War.

For decades during the 20th Century, when high rise office buildings crowded in around it, the White Street building housed a liquor store. In the 1980s a bar, taking its name from the surviving painted glass window signs, opened.  "The Liquor Store" prospered for a decade.

Then, In 1990, a mosque opened at 245 West Broadway. Because the state’s Alcohol Beverage Control law prohibits establishments selling liquor within 200 feet of a house of worship, the bar was notified that its liquor license would be revoked. The mosque, in the meantime, insisted it had no objection to the nearby bars.  “We don’t dictate other people’s behavior,” an official said. 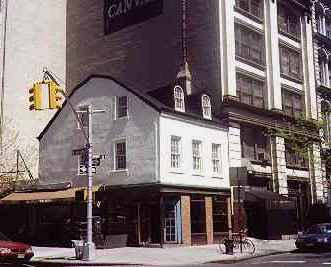 Eventually the bar became a men’s clothing store, still clinging to the name “The Liquor Store.”

No. 2 White street was designated a New York City Landmark in 1966. Two centuries after construction Gideon Tucker's quaint little house is in a remarkable state of preservation – the great miracle surrounding it being that the it has survived at all. 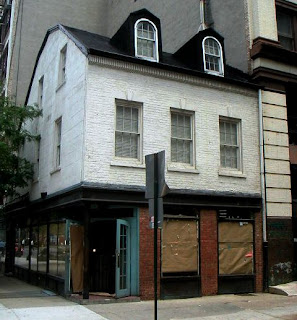