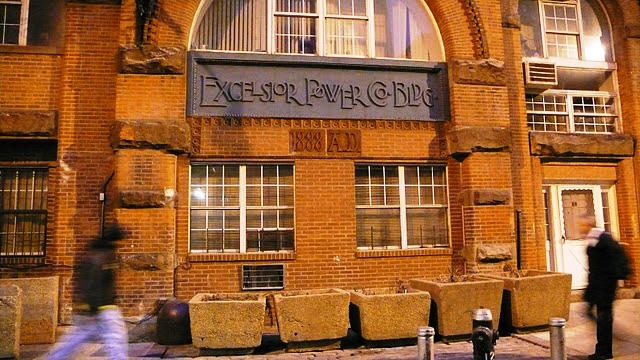 Photo by Ken Mac﻿
Somehow in 1887 Martin B. Brown convinced William Milne Grinnell to design the new headquarters for his Excelsior Power Company. Grinnell, while trained as an architect at Yale, never practiced. According to the 1922 State of New York Thirty-Third Annual Report of the State Hospital Commission, “He devoted himself largely to travel and the collections of works of art, and having a penchant for oriental art, spent much time in Egypt, Algiers, Tunis and Persia, occasionally extending his trips to China and Japan.”

Brown’s firm, originally called the Excelsior Steam Power Company at 13 Spring Street, converted steam to electricity. As the population became familiar with electricity and its safety became more apparent, demand increased. Brown, who was also the printer for the City of New York, needed a more suitable building. (The very interesting Brown was also Fire Commissioner, President of the Queens Ice Company, Vice President of the 19th Ward National Bank, invented the steering wheel for fire trucks and built the first “cable road” in New York at 125th Street.) 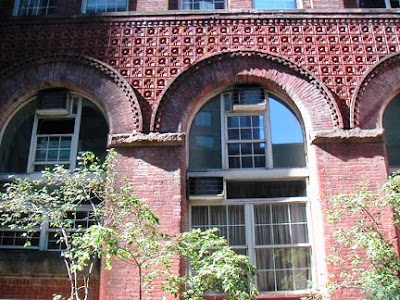 Above the entrance a cast-metal sign pronounced the building’s name over the terra cotta date – perhaps the structure’s single most interesting feature. Writing in the AIGA Journal of Design over a century later, Paul Shaw called the sign a“gutsy nameplate” and said “the proto-Art Nouveau letters, one of the great examples of architectural lettering in New York, are cast in metal and affixed by screws. Oddly, the date does not match the nameplate. Instead, it is cast in terracotta in Gothic revival style.” 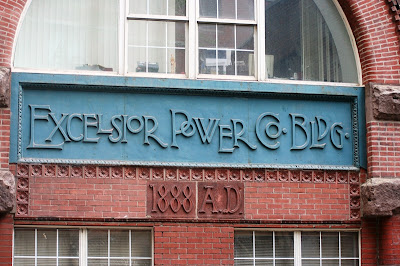 Photo AIGA Journal of Design
Along with the power company and his printing business, Brown filled the building with other printing firms and jewelry manufacturers. In September of 1891, an exhibition was held here demonstrating a new printing press that “will print 24,000 to 40,000 shop bills in an hour and will use two miles of paper in that time.”

In the first decades the new building seemed cursed by fire. A fire on Fulton Street on July 29, 1894 damaged the rear of the building. Four years later, on June 1, 1898 the Clark and Zugalla company on the fourth floor caught fire doing $3000 damage. Again, on January 25, 1901 the building caught fire. Through it all the substantial building never sustained serious structural damage.
﻿ ﻿No. 33 Gold Street’s back luck was not limited to fire. On September 10, 1892, 15-year old Frank Cowey got his hand caught in a pipe-cutting machine in the shop of E. F. Keating. The boy walked, with help, to the Chambers Street Hospital where doctors performed an amputation of a finger. When the ether cup was removed from his face, the boy was dead.
At the inquest a week later, the jury exonerated the doctor from all blame in the matter. It decided that “death was caused by an injection of cocaine administered by Dr. Cushing with proper judgment and was in a measure due to ‘a peculiar unknown existing idiosyncrasy.’”

Another boy died at No. 33 Gold when 16-year old Francis Faeth, a worker at Stern Brothers, climbed out on the fire escape on the 6th floor to witness the excitement of a jewelers strike on the street below. The boy fell to his death.

Here, in 1921 Special Deputy Commissioner Carleton Simon seized a large quantity of opium and counterfeit revenue stamps in the jewelry firm of Sebastian Fagella. A few months later Fagella was arrested again, this time for producing forged fight tickets for the Dempsey-Carpentier bout.

The narrowness of Gold Street, originally laid out for horse carts and pedestrians, discouraged the growth of retail or office space. No. 33 Gold Street, therefore, retained nearly all of its architectural integrity – never being seriously altered with shop windows or pseudo-modern fronts. 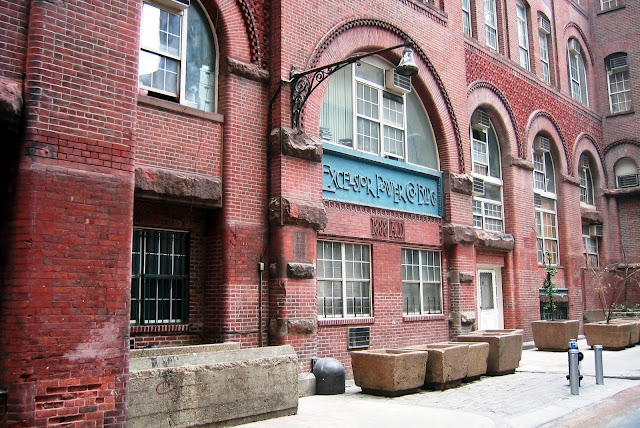 Photo Wally Gobetz
Now converted to residences, its over-sized entrance arch has been bricked up, the original windows have been replaced by an unsympathetic modern mish-mash, and a truly unfortunate choice of a metal “Dutch door” with scalloped edges around the window serves as an entrance.


Nevertheless, one of William Milne Grinnell’s rare buildings – if not his only one – survives remarkably intact and essentially overlooked.
Posted by Tom Miller at 2:53 AM