In 1867, two years after the end of the Civil War, prosperity manifested itself in Greenwich Village with blocks of substantial upper-middle class homes.  On Perry Street, between West 4th and Bleecker Streets, elegant brownstone residences reflected the success of their owners.


At No. 70, Walter Jones broke free of the expected Italianate style. He, instead, turned to the new French Second Empire manner which was sweeping Paris and Washington DC.  Jones acted as owner, builder, and the architect for the cutting-edge residence.

Bill Harris, in his One Thousand New York Buildings, pointed out that “Although it is twenty feet wide, like all its neighbors, its proportions make it seem larger than the others.” 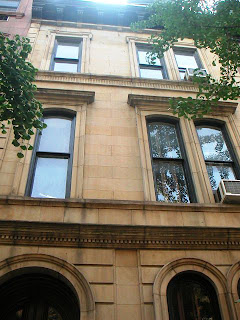 The top floor was housed in a stylish mansard roof.  Below street level was the English basement. The light-colored stone contrasted dramatically with the chocolatey brownstones along the block.

The broad entrance staircase spilled from the door to the sidewalk, flanked by heavy cast iron railings and newels in the Italianate style. 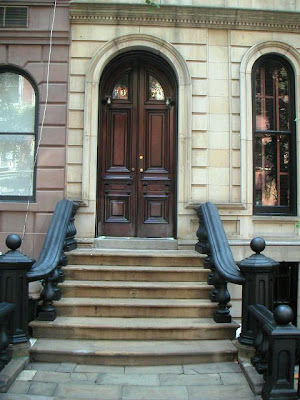 Jones built No. 70 as an investment property, renting it to well-heeled residents; however only four years later he lost the property to foreclosure. The subsequent owner continued renting the house for 25 years before selling it to real estate agent Albert Messinger in 1896.

Messinger lived here until 1912. Afterwards, the house became home to poet Shaemas O’Sheel.  O'Sheel, who, in addition to his writing, ran twice for the Republican Congressional seat, was active in the Irish Independence Movement (although he had never been to Ireland and was born James Shields) and was a literary critic for both The New York Times and Harper’s,

During his 1920 run for Congress he asserted that he “will stand for the Republican policy of protective tariff, development of the merchant marine, and for the improvements of the Port of New York, and is opposed to the League of Nations, prohibition, socialism, and radicals who…are made not by agitators but by ’25-cent sugar and 20-cent milk,’” according to The New York Times. 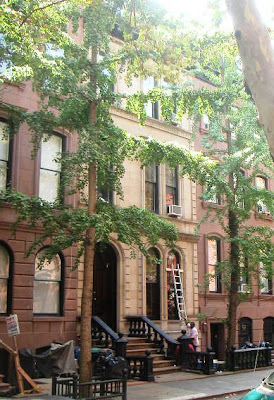 Today even the walnut interior window shutters remain in place and No. 70 Perry Street, which the AIA Guide to New York City called “the architectural gem of the block,” remains an graceful private home in impeccable condition.
Posted by Tom Miller at 2:46 AM