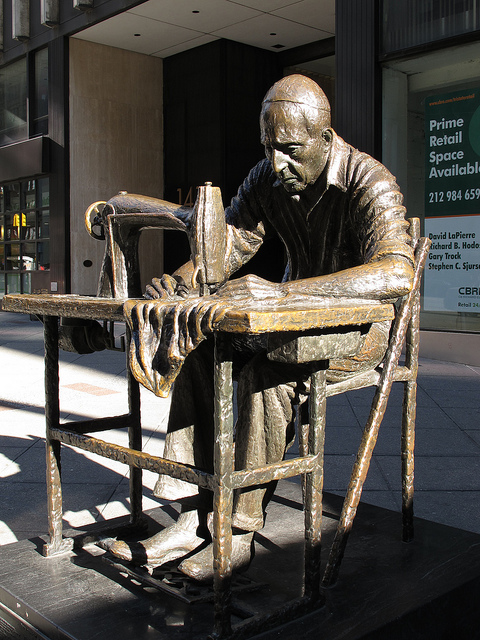 Photo by Scott Beale
Throughout the 20th Century the Garment District in New York, an area less than a square mile in area, was responsible for most of the ready-made clothing in the United States. Thousands of immigrants –Jews, Italians and Irish-- who flooded into Ellis Island found work along 7th Avenue in the sewing and cutting rooms.

C. J. Sullivan wrote in The New York Press “The Garment Center in New York was once one of the few districts in the city where most anyone who was willing to work hard could find a job. Immigrants, people with little or no education, those with no work history or skills…flocked there to get a job. All that was required for a steady paycheck was the ability to deal with the mind-numbing labor. The women – and some men – needed quick hands to work the sewing and pressing machines, and the younger men had to have strong backs to push the carts and delivery the clothes to other stores and trucks.”

He added “No one but the owners made a fortune, but many a lawyer and doctor was put through school because of the hard work of their parents toiling down in the Garment Center.”

As the century came to an end, cheap overseas labor crippled the ability of local manufacturers to survive. The 7th Avenue sample rooms and garment factories were converted to office and retail space. Little by little the characteristic old Garment District was dying.

In 1978 Israeli-born artist Judith Weller sculpted a nostalgic two-foot high statue of her father, a tailor, and submitted it to an exhibition by the National Sculpture Society. There it caught the eye of a member of the Ladies Garment Workers Union. A full-sized version was commissioned by the Union. 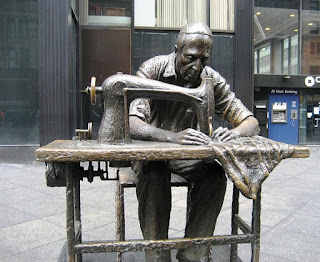 Completed in 1984, The Garment Worker was presented as a gift to the City by the artist, the Ladies Garment Workers Union, and donations from designers and fashion manufacturers. The 8-foot bronze sculpture sits in front of 555 7th Avenue, a beautiful and haunting artwork that elicits a range of emotions from different viewers.

Photo by Wally Gobetz
Posted by Tom Miller at 2:39 AM