As the 1920s roared on in New York City, Irving Chanin was busy building. The developer was responsible for several Garment Center buildings, as well as the famous Roxy Theatre, the Majestic Apartments and the Century Apartments on Central Park West, and the Royale and Majestic Theatres.


His signature building would rise at 122 E. 42nd Street at Lexington Avenue, The Chanin Building. Chanin commissioned architects Sloan & Robertson to design his 56-story tower. It would be the first major Art Deco office building in the city and, according to The City Review, “the finest expression of Art Deco in the city.”

Mayor James Walker was on hand for the dedication of the building in January 1929. It heralded the beginning of an age of iconic Art Deco buildings in Manhattan: Rockefeller Center, the Chrysler Building and the Empire State Building would all rise in a matter of years.

Although the bulk of the structure, complying with the city’s demand for set-backs, has been declared somewhat unexciting; the crown of the building with its buttresses and piers has been called the finest in the city. What no one complains of, however, is the exuberant Art Deco decoration. 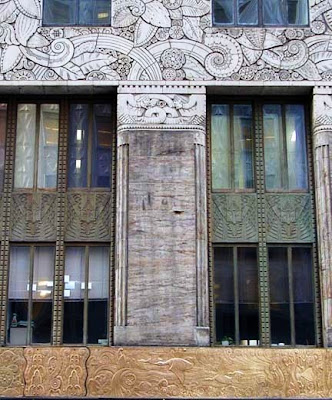 In “New York 1930, Architecture And Urbanism Between the Two World Wars,” authors Robert A. M. Stern, Gregory Gilmartin and Thomas Mellins write “Above shop fronts sheathed in bronze and black Belgian marble, a bronze frieze narrated the story of evolution, beginning with the lower marine forms and then bursting forth with fish and birds. This formed a plinth for a two-story colonnade of massive Norman piers whose squashed cushion capitals were carved with writhing sea monsters. The fourth story was sheathed in terra-cotta panels rendered with a bold overall pattern of abstract floral patterns”

The frieze depicting evolution stopped at geese; the designers no doubt feeling that including man in the process, only four years after the Scopes Trial, might be too controversial. 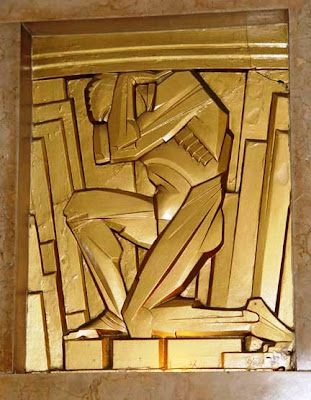 Chanin used his own architectural department head, Jacques I. Delamarre and Rene Chambellan, an architectural sculptor, to decorate the interiors. Fantastic Art Deco grills, elevator doors, mailboxes and sculptures greeted the visitor. Two bronze-painted plaster reliefs by Chambellan represent Achievement and Success. The means to gain these are represented in six matching reliefs: three are physical, Effort, Activity and Endurance; and three are mental, Enlightenment, Vision, and Courage. 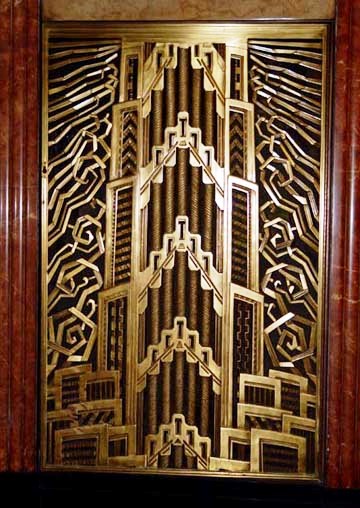 On the 54th Floor was an roof top observatory and on the 50th and 51st floor was a 200-seat theatre decorated in silver and black for the tenants’ sole use. Later the space was converted to offices.

Chanin installed his own offices on the 52nd floor, lavishing it with Art Deco ornamentation, including bronze gates. Below ground the Baltimore Ohio Railroad Company leased space for ticket offices, waiting rooms and a bus terminal – complete with an immense turntable to turn the busses around.

The Chanin Building was perhaps solely responsible for making 42nd Street the premier commercial address of the time. The imposing structure became the subject of one of Hugh Ferriss's architectural paintings.

Throughout the 20th Century to the present it remains a striking presence in midtown -- an Art Deco masterpiece.

Hugh Ferriss's "Chanin Building"
Posted by Tom Miller at 3:10 AM