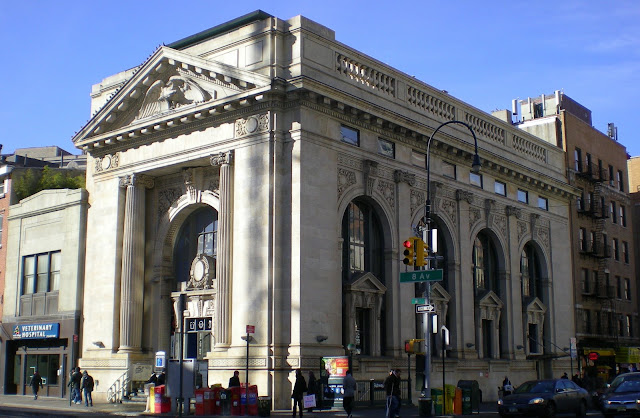 On September 21, 1902 depositors in the New York County National Bank grew nervous.  The bank showed a deficit of $43,250 and its reserves were wiped out.

Bank president Francis L. Leland, however, refused to allow his bank to crash. Leland’s father, Francis Sr., had been president from 1857 until his death in 1885. The New York County National Bank was essentially a family business.


Within four years Leland’s bank had recovered so well that a new, imposing structure was planned for the southwest corner of 14th Street and 8th Avenue -- directly opposite of the classical white marble New York Savings Bank on the northwest corner.

The bank’s board selected the architectural firm of DeLemos & Cordes to design their new headquarters. The firm was responsible for the magnificent Siegel-Cooper Dry Goods Store and the Adams Dry Goods Store on 6th Avenue, and for the beautiful new Macy’s Department Store on 34th Street. Rudolph L. Daus, a graduate of the Paris Ecole des Beaux-Arts, was given the project.


Daus produced a limestone-clad neo-classical temple with Beaux-Arts touches. Enormous Corinthian columns support the majestic entranceway above a short flight of steps where a recessed arch rises the equivalent of three-stories. In the pediment above, a striking vigilant eagle in near full-relief cranes its neck beyond the cornice-line.

Four arched windows on the 14th Street side match the entrance.  Separated by Cornithian pilasters, each window arch incorporates classical pseudo-doorways where Daus included in the ornamentation caduceuses – so often associated with the medical profession – as a reference to Mercury, the god of commerce. 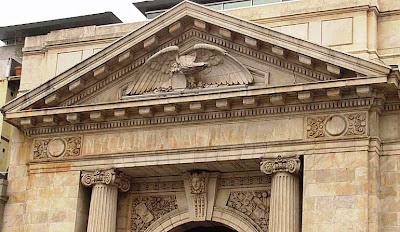 The two Roman temples, each commanding a corner of 14th Street and 8th Avenue, created an imposing composition; what the AIA Guide to New York City called “A rare occurrence for this city; a pair of classically inspired sentinels guarding the western corridor of 14th Street.” 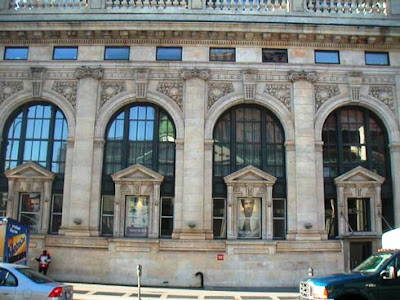 
The bank did lose its identity wholly, however, in the 1930s when it was absorbed by Manufacturers Trust Co., later to be renamed Manufacturers Hanover Trust in the mid 1960s. The institution used the building until it merged with Chemical Bank in 1994. Afterwards the monumental building sat empty until it was briefly used as a theatre. Then, in 1999, Lee Harris of Hudson River Studios and John Reimnitz converted the space for Nickel, a men’s spa created by Philippe Dumont; and designed an addition for residential apartments.
Rudolph Daus’ impressive limestone bank was designed a New York City Landmark in 1988.
Posted by Tom Miller at 3:48 AM