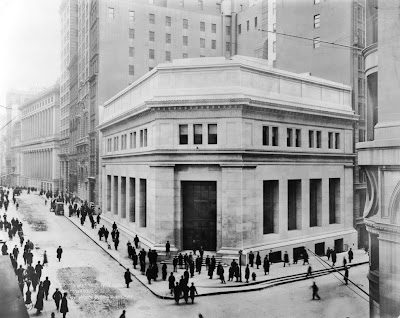 As we agonize under the constant threat of terrorism in the 21st Century, we tend to forget that such activity is not new to the world. In the beginning of the 20th Century it was the “anarchists” who disrupted daily life and planted fear in the hearts of civilians.


On September 16, 1920 brokers and bankers went about their daily routine along Wall Street. Just before noon a mail carrier opened the letter box at Cedar Street and Broadway and found a hand-written note: “Remember we will not tolerate any longer. Free the political prisoners or it will be sure death for all of you. American Anarchists Fighters.”

Shortly thereafter, as the clock in Trinity Church tolled 12:00, a horse-drawn cart packed with 1000 pounds of dynamite and 500 pounds of metal, chunks of iron sash weights and other schrapnel, exploded on the Wall Street side of the J. P. Morgan bank building at 23 Wall Street. 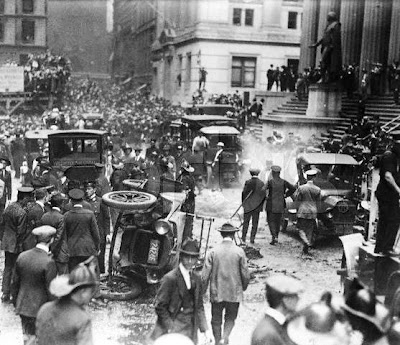 The blast was fearsome, blowing out the glass panes of office buildings for blocks. There were 30 immediate fatalities, hundreds of injured. Six more would subsequently die of wounds.

The Morgan Building made an iconic target as a symbol of capitalism in a time of rising Marxism and Leninism. The terrorists, however, were unaware of the 7-foot thick Tennessee marble walls that withstood the blast structurally unscathed. “If,” said The New York Times, “as is generally believed, the explosion was an anarchist assault upon J. P. Morgan & Co. as a leading banking firm, it failed in its purpose.”

“Although the interior of the Morgan offices was wrecked, the substantial stone building, except for some slightly defacing scars, was not damaged. Within four hours after the explosion workmen were repairing the damage…” said the article. Many of the 400 to 500 employees in the building sustained cuts from flying glass, however only one Morgan associate was killed.

The Morgan building was just four years old at the time.   In 1912, J. P. Morgan had purchased the Drexel Building, used as headquarters for the Mechanics and Metals Bank, as a site for his new offices.  The banker hired architects Towbridge & Livingston, who had recently designed the Bankers Trust Building diagonally across the street.

A year later, on February 18, The New York Times anticipated the new building. “The plans as at present decided upon provide for a building of only two stories, but it will have the height of a four-story structure, as both of the floors will be of exceptional height. The foundations, however, will be sunk in bedrock, sixty feet or so below the surface, giving an opportunity of enlarging the building to thirty or forty stories, if required , in the future.”

Planning for the “opportunity of enlarging the building” included the 7-foot thick lower walls, capable of sustaining the weight and ultimately responsible for surviving the explosion.

“The new Morgan banking house will be constructed entirely of Knoxville marble, the same kind of stone used for Mr. Morgan’s art gallery and library,” said the article. “It will be of a simple Italian Renaissance type of architecture. The main floor will be used for the general banking rooms. Executive offices and conference rooms will be on the second floor.”

J. P. Morgan died in 1913, before construction began. When completed, the staid structure won immediate praise from the Real Estate Record and Guide, which said ''The best skill which Athens could command at the height of her glory was given the construction.” The Guide called it “a rival to the Parthenon.”

The banking floor was a single five-sided room with a 30-foot coffered ceiling around a domed skylight. Each of the paneled partners offices upstairs boasted a fireplace. Outside, there was no sign. If a person did not know that the building was J. P. Morgan & Co. he probably did not belong there.

In 1959 J.P. Morgan & Co. merged with the Guaranty Trust Company, forming Morgan Guaranty Trust Company. In 1960 they merged the 23 Wall Street building with the 1929 Trowbridge & Livingston 38-story building behind it at 15 Broad Street. Architects Rogers & Burgun ripped out most of the 1920s interiors of the skyscraper, replacing them with 1960s Modern designs; however the main banking lobby of the old Morgan building was left essentially intact.

The reprieve was relatively short-lived, however, and in the 1990s the grand banking lobby was stripped of its original detailing and renovated into a training and conference facility. 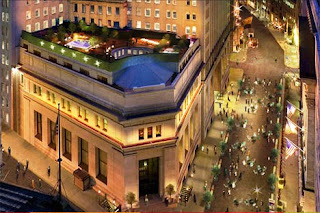 When Morgan Guaranty merged with Chase Bank in 2000 the building was abandoned and demolition of the skyscraper was proposed, however three years later the combined properties were sold for $100 million. An additional $135 million was spent by A. I. & Boymelgreen to convert them to residential condominiums called “Downtown by Philippe Starck.” Starck, perhaps France’s most prominent designer, not only designed the roof of 23 Wall Street into a garden and pool area for the residents, but added a small theatre, squash courts, bowling alley, and basketball courts for the amusement of the residents. 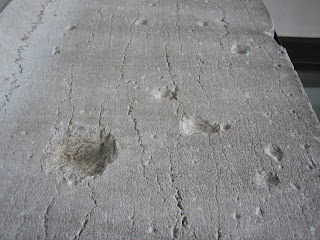 The façade of the old Morgan Building is still pock-marked with the damaged of the 1920 explosion. The Morgan Company was adamant about not repairing it; perhaps as a symbol of the bank’s resilience. Whatever the reason, the scarred marble at 23 Wall Street is a vivid reminder of a time of terrorism in American we have been quick to forget.
Posted by Tom Miller at 3:21 AM