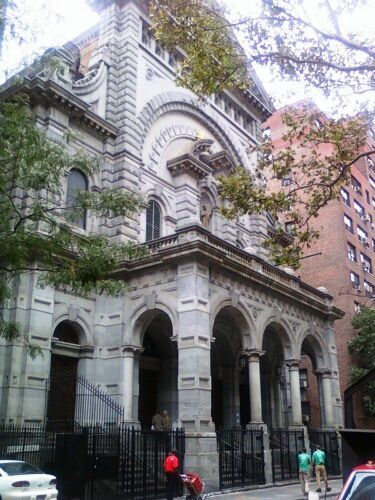 The Jesuit community in Fordham, New York set out to establish a church and school in Manhattan in 1847. Before long they had acquired land between 16th and 15th Streets and constructed a classic-style, unimposing church. As the parish grew larger, it strained the limits of the structure.

It was here, on the evening of March 9, 1877, that tragedy struck. While Father Langlacke was preaching “on hell and the horrors of the damned; and as the preacher was picturing the torments of purgatory, a young woman in the corner gallery, overcome by her feelings, fainted, and gave utterance to a hysterical scream, starting the worshippers, and causing them to spring to their feet,” according to a local newspaper.

In the confusion, someone yelled that a fire had broken out in the gallery. The parishioners stampeded towards the doors. A “very stout woman” fell at the bend in the stairway from the gallery and before she could recover, the panicked women behind her trampled over her and the others who fell. In the end, seven women died in the frenzy.

A year later plans were drawn up for a new, magnificent church. Irish-born architect Patrick Charles Keely, who would design hundreds of church buildings before the end of his career, was given the commission. His church would be like nothing ever seen in Greenwich Village.


Completed in 1882, the gray granite structure dwarfed everything in the neighborhood. The AIA Guide to New York City says, “The monumental porch of this neo-Baroque church spills onto the sidewalk.” The façade rises, in rough-cut blocks, high above the sidewalk in lofty stateliness. “Inside is an equally monumental Baroque space,” says the AIA Guide.


The interior spills over with European-style ornamentation: frescos, carved plaster and stone, arches, niches, inlaid marble; a frenzy of ecclesiastical decoration. It was declared “sumptuous and exhilarating” by The New York Tribune.
The cost of the building was a staggering $930,356, including furnishings. Three years later, on December 6, 1885, The Rector Reverend John J. Murphy reminded the parish that the church had to be paid for. In a circular letter he wrote “Wherefore I say to all members of the congregation who have done their part in defraying the expenses incurred between May 1878 and December 1885 ought now to feel consoled when they look upon the splendid temple they have helped to build for the greater honor and glory of God. More than this, they ought to be ready to give now with fresh zeal and generosity, believing that the Lord will bless them abundantly for all they give in His name for the redeeming of His house from the indebtedness which still lies upon it.”

Apparently the parishioners did not give “with fresh zeal.” On November 29 of the following year The New York Times reported that “The Rector, the Rev. John J. Murphy, S. J., has issued an appeal to his congregation for greater efforts toward wiping out the great debt which embarrasses the church.”

Eventually the magnificent structure was paid for.

On March of 1947, a painting of Saint Francis Xavier which had hung in the Immaculate Church in Nagasaki, Japan and miraculously survived the atomic bomb that obliterated the city was presented to the Church of St. Francis Xavier.

In 2005 the parish initiated a $6 million restoration. The interior was essentially gutted to replace flooring, restore the pews, upgrade mechanical and electrical systems, lighting and plaster repair and cleaning.

Outside a complete restoration was completed including the replacement of up to five percent of the granite façade, where damage was beyond repair.


The majestic church was rededicated on June 19, 2010; an unexpected masterwork on a tiny side street of Greenwich Village worth discovering on a weekend stroll.
non-credited photographs taken by the author
Posted by Tom Miller at 3:21 AM