In the last half of the 19th Century the Bowery was the center of nightlife for the mostly German population of the Lower East Side. Beer gardens and music halls lined the street and Victorian songs celebrated the carefree atmosphere. Everything on the Bowery, however, was not innocent.


Just after the Civil War a hotel was erected at 295 Bowery for returning soldiers. It was a red brick, vernacular structure with limestone trim, attractive heavy solid stone lentils and a rather ambitious cast metal cornice. By 1880 it was Steuben Hall, the headquarters of the political group, the German Republic Central Committee. The respectable atmosphere of the hotel, however, would be short-lived.

Prostitution and gambling was migrating from the Water Street area to the Bowery by the 1890s. In the balconies of many of the Bowery theatres, which catered to a lower class audience than those in the 23rd Street theatre district, prostitutes openly plied their trade. Sailors searched the seedy saloons for the harlots who haunted them. It was the sort of environment that attracted John McGurk.

McGurk had previously owned three saloons, each one closed down by the police. In 1893, at 295 Bowery, he opened another. McGurk’s Saloon earned an immediate reputation as the most degraded spot on the Bowery. The bartenders were thugs and thieves and the prostitutes who ended up at here had fallen as low as they could go. 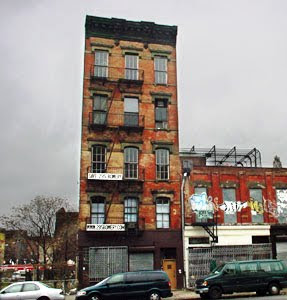 In 1882 James D. McCabe, Jr. described these women. “…you would find her in the terrible dens, sailors’ dance houses, and living hells of some kindred locality. She is a mass of disease, utterly vile and repulsive, steadily dying from her bodily ailments, and the effects of rum and gin. She has reached the bottom of the ladder, and can go no lower. She knows it, and in a sort of dumbly desperate way is glad it is so. Life is such a daily torture to her, hope has so entirely left her, that death only offers her relief.”

So it was with the girls at McGurk’s. One by one they committed suicide in the saloon or the hotel above it – reportedly six deaths and seven failed attempts in 1899 alone.  A few threw themselves from the top floor windows, others drank carbolic acid. Two, Blonde Madge Davenport and Big Mame, made a pact to end their suffering. They purchased carbolic acid at a nearby pharmacy, then returned to 295 Bowery. Davenport swallowed her dose, ending her life in writhing agony. Big Mame, however, in trying to gulp the acid splashed most of it on her face. Disfigured and unable to work, she was banned from McGurk’s thereafter.

In response to the notorious deaths, John McGurk renamed his saloon “Suicide Hall” -- a callous, tongue-in-cheek marketing scheme. He defended himself as an innocent by-stander. “Most of the women who come to my place have been on the downgrade too long to think of reforming,” he said. “I just want to say that I never pushed a girl downhill any more than I ever refused a helping hand to one who wanted to climb.”

His head bartender, "Short-Change Charley" Steele, who was once arrested for murder, kept a supply of chloral hydrate ready to drug unsuspecting patrons. To make the liquor go farther it was diluted with water, then camphor was added to strengthen the taste. McGurk’s was the first establishment to have an armed “bouncer.” His was "Eat-‘em Up" Jack McManus. McManus was repeatedly arrested for assault, however since his victims were always stricken with memory loss when it was time to identify him, he was never held.

McGurk’s, from the beginning, was the target of police raids. In 1893 The New York Times reported “They charge McGurk with admitting minors to a concert saloon where intoxicating liquors are sold. When they visited the place the agents found it overrun with men and women of the lowest type. Everything was carried on openly and in a disgusting manner. The agents found Mary Ormsby, fifteen years old, of 249 Spring Street, in the place, and they at once arrested McGurk. The girl was taken to the rooms of the Gerry Society.”

A year later McGurk was held by Justice Hogan for running a disorderly house – or brothel – but was released because due to the transient nature of his “hotel” guests “naught would have come of the raid.”

By 1899 with Theodore Roosevelt serving as police commissioner, the pressure on McGurk intensified. That January before young George Eberhardt set off to identify Charley Steele who was being held on murder charges, he was shot dead. Two months later, on March 8, McGurk’s brother, Patrick, was arrested “in the resort at 295 Bowery” for running an establishment “for disorderly persons.”

On April 2 of that same year The New York Times reported that McGurk’s liquor license was to be revoked. “We are not conducting a disorderly house,” protested the manager. The article said “John McGurk has been ill at his house for several weeks, and last evening said he had sold out the place and has nothing more to do with it.”

In actuality McGurk had not sold the place and in 1900 Suicide Hall was named by John McCullagh, State Superintendent of Elections, as a place of “colonizing” – a practice whereby transients were housed in McGurk’s “hotel” in order to tip the district election results.  By keeping "friends" in office, McGurk had been able to evade the law.

The overt illegal activities of McGurk and his crew eventually became too much to ignore.  Bartender William Strauss and McGurk’s nephew, Philip McKenzie, noticed an intoxicated patron, Samuel Cohen, stumble out of the bar on March 11, 1900. The New York Times reported “…as he left the two men followed him up the Bowery and attacked and robbed him at the corner of Bleecker Street.” Judge Newburger had had enough of Suicide Hall.

Strauss was given a sentence of ten years and three months in Sing Sing Prison and McKenzie, a minor, was sent to the Elmira Reformatory. “If I can do it I’ll make the Bowery as safe at night as it is in the daytime,” the judge said.

On March 23, 1901 the police raided Suicide Hall again. “McGurk’s was in full blast,” reported The Times. “The place was crowded. Men and women were drinking and smoking. Sailors and all kinds of people were there and dancing was going on with the rest of the amusements when the police startled everybody by rushing in…Then Col. Monroe indicated the men he had warrants for, and they were placed under arrest and taken to the station house by some of the policemen.”

“The men and women in McGurk’s were excited and shouted that they wanted to get out, while the crowd outside yelled back. When the three prisoners were taken out the crowd jeered them,” said The Times.

With the pressure on, McGurk installed a new sign outside on which McGurk’s name did not appear.  The Times said, however, that it "had its usual crowd of sailors and their companions, with a ‘barker’ at the door who assured all comers that ‘the old place is still McGurk’s and it hasn’t moved away.’”

By April 1902 with a new police captain, James Churchill, at the Fifth Street Police Station, the end was near for McGurk’s. Churchill was obsessed with closing down disorderly houses and sending their proprietors to prison.

“When I first took command, I told John McGurk, who was the proprietor of several dives in the district, that he would have to close them. McGurk laughed at me,” said Churchill. “McGurk soon found that I would not stand for any funny business and asked me to give him a month to dispose of his lease to some financial advantage. I granted him this time but told him not to violate the law in the meantime. McGurk is now a nervous invalid at his home, 209 East Eighteenth Street.”

McGurk was in truth using the "nervous invalid" ploy to flee. He skipped out on $1000 bail and took his wife, Louisa, and his daughter Matilda, to California with approximately half a million dollars in cash. He died in 1913 at the age of 59.  “His last heartbreak came when his daughter Martina was denied admission to a convent school after those in charge discovered her father’s identity,” according to Luc Sante, author of "Low Life: Lures and Snares of Old New York."

After McGurk, 295 Bowery changed little. For approximately 40 years it was known as The Liberty Hotel, a cheap flophouse for Bowery men down on their luck. A sign there reminded them “When did you write to mother?”

The reputation as McGurk's stuck and when Mae West wrote her 1932 novel “Diamond Lil,” she included a chapter “Suicide Hall.”

In the 1960s female artists took over the hotel, converting it into an artist co-op where writer and sculptor Kate Millet worked and where photographer and custom furniture maker Sophie Keir had a space. The co-op lasted for four decades until the Cooper Square Urban Renewal Plan targeted the building in 1999.

Despite the unexceptional architecture and the questionable, if colorful, historical significance of the building, a group protested against its demolition, pressing the Landmarks Preservation Commission to designate it a landmark. The Commission declined, citing insufficient historical, cultural or architectural merit. 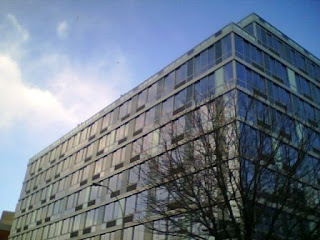 295 Bowery was razed in 2005. In its place is an unexciting glass and steel apartment building, Avalon Bowery Place; a symbol of the changing atmosphere of The Bowery which has effectively erased a vibrant and infamous chapter in New York City history.
Posted by Tom Miller at 3:20 AM