Broadway around Union Square was an exclusive shopping area in the early 1880s. Tiffany & Co., Lord and Taylor, A. T. Stewart and Arnold Constable had all moved their emporiums north from downtown in the 1870s. The exclusive silver merchants Gorham Manufacturing Company would follow suit.

Robert and Ogden Goelet had inherited large plots of land along Broadway. Small commercial buildings filled the plots not yet taken over by the huge cast iron or marble-fronted dry goods stores. Two such buildings – a hardware store and a marble dealer – sat at the north west corner of Broadway and 19th Street. The Goelets commissioned architect Edward Hale Kendall, who had recently designed their Fifth Avenue mansions, to build a mixed-use structure on the site.

Kendall's choice in Queen Anne was surprising on a thoroughfare lined with imposing French Second Empire retail stores; however the eccentric design and red brick stood out prominently among its neighbors.

The first two floors of the building were designed for commercial use, while the upper floors were laid out as bachelor apartments, which had no kitchens nor dining rooms.

By this time Tiffany & Co. had become the established itself as the hallmark of quality jewelry. And while the firm offered flatware, New York City’s carriage trade went to Gorham Manufacturing for its silver. When the Broadway building was completed in 1884, Gorham left its downtown location and took over the two lower floors. 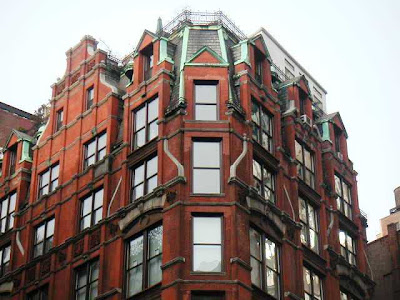 The New York Times reported on May 28, 1884 “The first and second floors of the new structure are devoted to an exhibition of the silverware manufactured by the company, which is displayed in rich mahogany cases and illuminated at night by the Edison electric light with which the building is lighted, and the effect of this light on the heavy silver articles is remarkably brilliant...There is scarcely an article that can be manufactured of silver that is not to be found in this magnificent new store.”

A year later the store had expanded to include the third floor. The Times reported that “...the glitter of silver on each floor is ruinous to weak eyes. No greater collection of solid silverware is to be found in any one place on this or any other continent, the assortment ranging from scarfpins and sleeve buttons to huge punmch bowls and dinner sets, so that the presence of brides, grooms, friends, and relatives is easily accounted for.” The article listed dresser sets, tea and dinner services, trinket boxes, trays, and “so many unique and curious designs that it is a toil and trouble to select therefrom.”

The company used innovative designs in its flatware and hollowware – Neo-Renaissance, Art-Nouveau and Aesthetic Movement trends, for example. King’s Handbook said the store offered “silver fashioned for every conceivable use.” And in Victorian New York, there was no end to "conceivable uses" for silver.

A testiment to the firm's quality, it was announced in 1889 that Gorham Manufacturing would be one of four American silversmiths to represent the U.S. at the Paris Exhibition.

Upon the assassination of President William McKinley, The New York Times noted on September 15, 1901 “Gorham’s silver establishment, at Broadway and Eighteenth Street, had a peculiarly effective window decoration yesterday. The background was in plain black. In the foreground there was a fine engraving of Mr. McKinley, draped, with a small green palm under the picture. Standing just to the right of the engraving was a bronze statuette of an angel, with her hands in a prayerful attitude, the face peering fixedly at that of McKinley.”

Joining in the migration of the exclusive shops to Fifth Avenue, Gorham left its Broadway corner on September 5, 1905. After a few years of various tenants, Robert Reis & Co., the men’s underwear manufacturer best known for its BVD brand, took over the lease in 1912.  Architect John H. Duncan renovated the building, converting it into loft and office space. Two decades latter Reiss & Co. altered the building again to accommodate manufacturing on the upper floors.

In 1977 the Gorham Building was extensively renovated for residential apartments on the upper floors and the street level was returned to commercial use and has been the familiar home to Fishs Eddy since then. 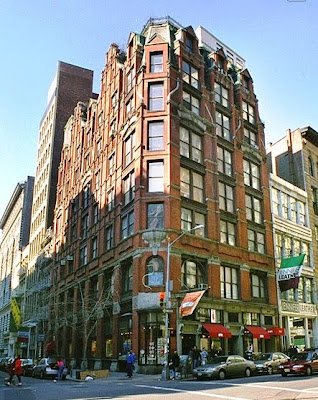 Photograph cityrealty.com
The building was landmarked in 1984.
Posted by Tom Miller at 2:52 AM