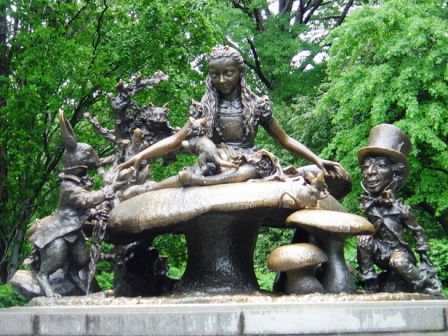 Native-born New Yorker George T. Delacorte started in business in the 1920s.  His firm, Dell Press, published comic books, paperback novels and movie magazines. By the 1950s he was a millionaire with, he felt, more money than he needed.  When his beloved wife, Margarita, died, he sought a way to express his profound grief as well as to memorialize her.

The publisher spent Sunday mornings in Central Park, often stopping to sit and watch the children play.  Margarita Delacorte had been an ardent Lewis Carroll reader, her favorite poem being “Jabberwocky.”  It became his inspiration.

Delacorte commissioned Spanish-born sculptor Jose de Creeft to design an enormous bronze statue of Alice in Wonderland, based on the Victorian illustrations by Sir John Tenniel.  Creeft worked closely with architect and designer Hideo Sasaki and Fernando Texidor, who designed the base.  They incorporated bronze plaques with inscriptions from the Carroll’s book, including Margarita's cherished "Jabberwocky."

On May 29, 1959 Parks Commissioner Robert Moses unveiled the 11-foot high statue, officially called The Margarita Delacorte Memorial.   Cast in Long Island City, Queens, by Modern Art Foundry of Long Island City, the complex grouping features Alice sitting on an enormous mushroom. Around her are the March Hare with his iconic pocket watch, a smug-looking Mad Hatter, the Dormouse nibbling on a seed, and the Cheshire Cat.

Unlike any other sculpture in Central Park, it was expressly designed to be touched, climbed upon and generally enjoyed.  It was immediately became a favorite among the children.

“It just seemed a nice thing to have in the park. On Sunday mornings I watch the kids climbing over it, under it. It’s a regular parade,” Delacorte said.

While the children never noticed their dapperly-dressed benefactor, he realized the joy his gift brought to so many.  The Alice statue would be just the first of many gifts to the people of New York.  Before long the fantastic, mechanical Delacorte Clock at the Children’s Zoo was installed. Then a fountain at Columbus Circle. Then another at City Hall.

As one gift after another was presented to the city, Mayor Ed Koch said “George T. Delacorte is to the City of New York what Lorenzo de Medici was to the City of Florence.”

The New York Times and other organizations were not so quick to praise.  They felt Delacorte’s choice of philanthropies were well-intentioned but misdirected. The money could be put to better use, it was thought, for institutions like hospitals or drug rehabilitation centers. His fountains and statues had no practical purpose.


Delacorte shrugged off the criticism. “What good is the Eiffel Tower?  Not everything has to have a practical function,” he said. “What do we remember about Rome? We remember the fountains and the statues. There has to be a place in life for the eye’s pleasure.”

His six children and 20 grandchildren would be well-provided for in his wife’s will, he told reporters, and besides, “leaving money to a child hurts more than it helps.” Because he was born and raised in New York and made his fortune here, “now I want to give my money back to New York.”

Few New Yorkers today, especially the swarms of children who climb over the bronze mushroom, agree with the pragmatic critics of the 1960s.

The Alice statue was central to scenes in the 2010 film Remember Me as the spot where Tyler and his sister Caroline meet.   Today the Alice in Wonderland statue continues to be so popular with children – their hands and feet continually polishing the surface – that Central Park spends over $10,000 every year on its maintenance.

It is located inside the Park at East 74th Street.
Posted by Tom Miller at 2:36 AM