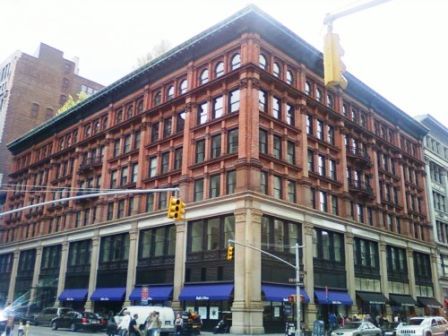 William C. Rhinelander died in 1878 but he had no intention of going out of business. The real estate tycoon left an estate valued at between $50 and $75 million, portions of which were bequeathed to his children and various charities. However, the will named a committee of Executors to manage his real estate holdings, directing them to increase “the rents, issues and profits of any part of his real estate, or of its ultimate value, to make improvements either by building or the acquisition of land adjacent thereto.”

And so William Rhinelander continued in the real estate business well past his death.

In 1892 his estate built a handsome retail and office building on the southeast corner of 6th Avenue and 20th Street.  Other high-end emporiums had already begun appearing along what would be known as the Ladies' Mile.  Where eight four-story brick homes had stood, architects Hubert, Piersson & Hoddick produced a six-story, red brick Neo-Renaissance building with white stone and terra cotta trim, Corinthian colonnettes, a heavy copper cornice and elegant iron balconies. 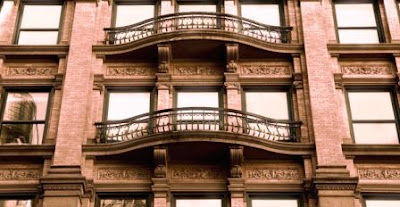 The structure was leased to Alfred J. Cammeyer, the foremost shoe vendor in the city.  Born in 1840, Cammeyer started in the business at the age of 15, working as a clerk in a shoe store. As he learned the business, he saved enough money to open a store of his own at Bleecker and Carmine Streets in 1876. By the time the Rhinelander building was being constructed he occupied a much larger shop at 6th Avenue and 12th Street.

On September 29, 1893 The New York Times reported that Cammeyer’s “spacious premises proved unequal to the demands upon them” and the store would be moving to the building at 6th Avenue and 20th Street.

The new building, said The Times, “constructed in massive and dignified style is, architecturally speaking, a welcome addition and ornament to Sixth Avenue…and is probably the largest and best equipped boot and shoe establishment in this country, if not the world.

“The main floor of the mammoth shoe store is beautifully finished in mahogany. There are separate departments for men, boys, ladies and children, besides a slipper department and a mailing department, the house having an enormous trade on mail orders.”

About an hour after the store closed at 8:00 that night watchmen in the store across the avenue noticed smoke and pulled a fire alarm. Police officer George Reid entered the building to check for anyone left inside. On the second floor he found Margaret Lynett “diligently sewing and unconscious of the fire.”

Officer Reid instructed the woman to hurry outside, but when they entered the hall and Mrs. Lynett saw the smoke, she fainted. “Reid made a gallant rescue by carrying the woman to the street where she was resuscitated,” said The Times.

By 1:00 am the first two floors were in ruins. Six feet of water flooded the basement and charred shoes littered the burnt interior. The next morning the newspapers told of the huge “stalactites” of ice that hung from throughout the interior, making the blackened store look like “a cavern.”

The substantial brick and stone building, however, was not seriously damaged and on March 6 the store reopened. Cammeyer stocked 25,000 souvenir tape measures for re-opening day, but they ran out before closing time. Hundreds of customers lined 6th Avenue all day waiting to get in.

It was necessary for Alfred Cammeyer to increase his sales staff to 600.

A crowd of deal-hungry shoppers, Cammeyer’s would find out in 1903, was not always a good thing.  On Feburary 10 the store promoted a “bargain counter.” Sixty-year old Mrs. Olonzo A. Emery traveled in from Sommerville, New Jersey for the event. As she was about to be waited on, the crush of other women around her became too much. She “uttered a cry” then fell to the floor. By the time the store’s physician, Dr. Schfeldt, could attend to her she was dead.

On August 14, 1909 Alfred Cammeyer died “of apoplexy” at 69 years old. The man who started out as an impoverished Yiddish-speaking teenager ended life in a mansion on Central Park West and 72nd Street, the owner of the largest shoe store in the country. His funeral was conducted at The Church of the Holy Communion – across the street from his beloved store.

Cammeyer’s will bequeathed the business to his “friend and trusted employee,” Louis M. Hart, with the express wish “that Mr. Hart would continue the business under the name of Cammeyer.” 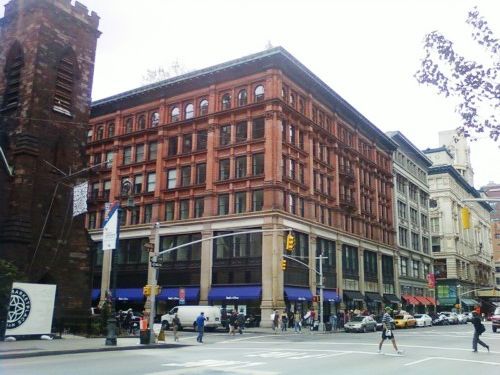 It was the end of the opulent days for the building at 6th Avenue and 20th Streets. The grand shoe store was divided into small retail spaces, then office space. In 1937 the interior walls between the Cammeyer Building and the Alexander Building to the south were broken through, joining the two buildings.

Eventually the space was taken over by the Audits and Surveys offices and drab governmental work spaces filled the building for decades. The once-exclusive Ladies Mile deteriorated and most of its imposing retail palaces sat empty and dark.

In the late 1990s the district was rediscovered. One by one the enormous Victorian stores were recycled into luxury residences or new retail spaces. In 2010 the Cammeyer Building was renovated into 67 residential condominiums, “The Cammeyer.”
Posted by Tom Miller at 2:46 AM