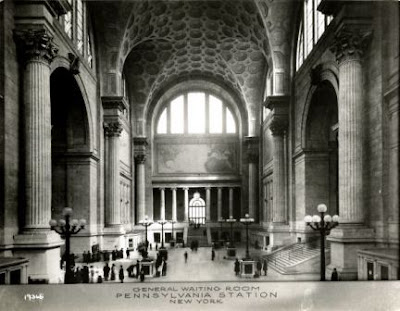 
As McKim, Mead and White began their designs for the newest Pennsylvania Station just after the turn of the century, they turned to Imperial Rome for inspiration. When they were done, they presented New York City with the most dramatic and impressive train station in the country. 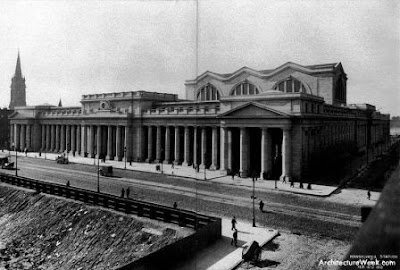 Completed in 1910 at a cost of $112 million, the immense structure ran the length of two city blocks along 7th Avenue. Eighty-four giant pink granite columns supported the cornice and porticoes. Two grand carriage entrances mimicked the Brandenburg Gate. Carved granite eagles, each weighing 5,700 pounds perched on the cornice. Covering over seven acres, it was as historian Jill Jonnes called it, a “great Doric temple to transportation.” 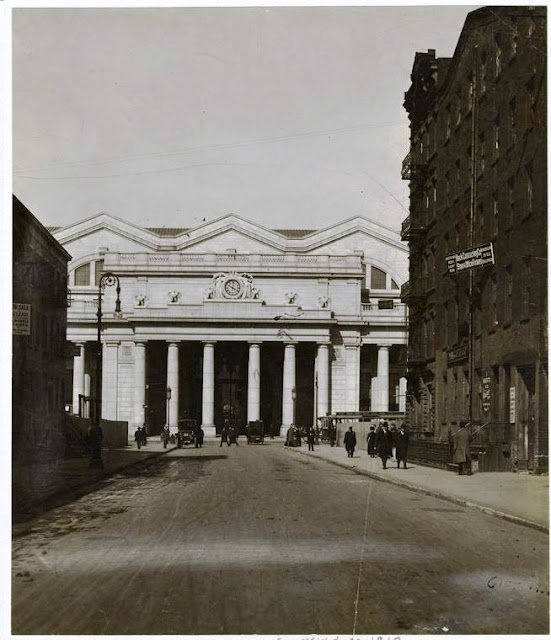 
The interior, however, was the show-stopper.

In its 1939 “New York City Guide” written for the Works Progress Administration, Random House described the progression of spaces. “The interior is a sequence of tremendous spaces. From a long, barrel-vaulted arcade, lined with shops, a marble stairway and escalators lead to the floor of the main hall. In this vast Hall, which is a copy of the Tepidarium of a Roman bath, are ticket booths and the information desk. Six murals by Jules Guerin depict scenes of the area served by the Pennslyvania Railroad. Along the west side are twin waiting rooms. Beyond them a great glass-roofed concourse gives access to the track platforms.” 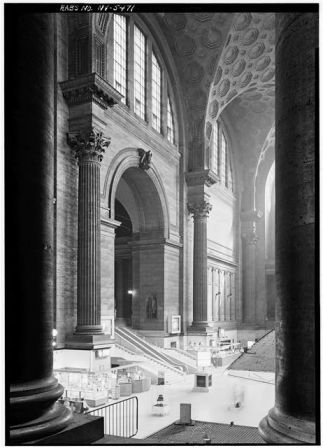 The main hall was a copy of the Baths of Caracalla on a larger, grander scale. The vast space was approximately equal to the nave of St. Peter’s Basilica in Rome – the largest interior space in the city, rising 15 stories upward. The concourse – a soaring conservatory of iron arches supporting a glass ceiling – was breathtaking. Writer Thomas Wolfe, overcome by its immensity, said that Penn Station was large enough to "hold the sound of time." 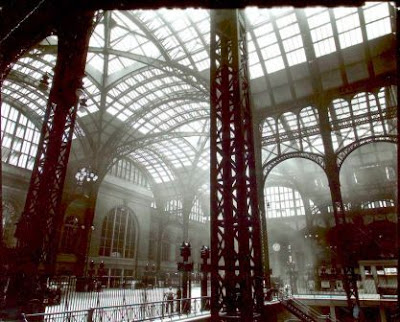 
Over 2000 railroad employees worked within the station and tens of thousands of passengers passed through it daily.  The station yard, part of which was below the concourse, covered 350,000 square feet requiring 650 steel foundation columns to support the floor.


Author Richard Guy Wilson in his 1983 “McKim, Mead & White Architects” said it “…was one of McKim's most monumental and moving designs, a giant of a building that still retained a human scale. In catching or meeting a train at Pennsylvania Station one became part of a pageant—actions and movements gained significance while processing through such grand spaces."

By the 1950s train travel was severely on the decline. The automobile and airplane took over as the preferred means of travel and the Pennsylvania Railroad felt the financial pinch. The cost of maintaining the colossal structure forced the railroad to attempt to divest itself from operating costs. Plans were announced to join forces with Madison Square Garden in 1961. The deal would provide the railroad with a new, air-conditioned station and a one-quarter stake in the new Madison Square Garden Complex.

Initially, nearly no one truly thought the monumental station would be demolished.

As plans progress, however, New York and the country in general, broke into two factions: those who felt that the razing of the old station and replacement with a new facility was progressive, and those who rallied against the loss of an architectural and historical treasure. There were no landmark preservation commissions nor legal means by which the destruction could be stopped, however.

On August 2, 1962 over 100 protesters wearing black armbands of mourning, almost all of them architects, picketed in front of Pennsylvania Station with placards that read “''Shame'' and ''Don't Amputate -- Renovate.''

Irving Felt, president of Madison Square Garden, found the preservationists to be a nuisance.  As the picketers marched he derided “Fifty years from now, when it’s time for [the new Madison Square Garden] to be torn down, there will be a new group of architects who will protest.” 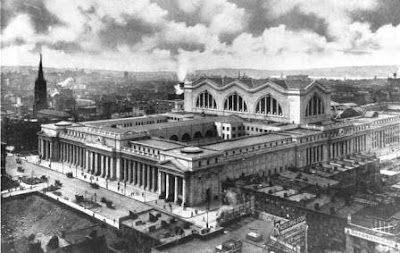 But despite cries from the press, politicians and architects, the largest, grandest train station in America was pulled down.  Irving Felt offered no regrets. "It was not, architecturally, a monument," he said.

The world at large disagreed.

In its editorial “Farewell to Penn Station” on October 30, 1963 The New York Times wrote "Until the first blow fell, no one was convinced that Penn Station really would be demolished, or that New York would permit this monumental act of vandalism against one of the largest and finest landmarks of its age of Roman elegance. Any city gets what it admires, will pay for, and, ultimately, deserves. Even when we had Penn Station, we couldn’t afford to keep it clean. We want and deserve tin-can architecture in a tinhorn culture. And we will probably be judged not by the monuments we build but by those we have destroyed”

The American Institute of Architects lamented “New York seems bent on tearing down its finest buildings… No opinion based on the artistic worth of a building is worth two straws when huge sums and huge enterprises are at stake.”

And architectural critic Louise Huxtable chided “We are an impoverished society. It is a poor society indeed that can’t pay for these amenities; that has no money for anything except expressways to rush people out of our dull and deteriorating cities.”

Adding insult to injury, in place of the pink granite temple, New York received an eyesore. Costing $116 million, the new Madison Square Garden complex was, from the day it was dedicated, considered unattractive at best. Carl Condit called it a “prime candidate for the most poverty-stricken architecture in New York — indeed, it is questionable whether the structures and enclosures can be regarded as architecture at all.”

If anything positive was born from the destruction of Pennsylvania Station, it was the outrage felt throughout the city and the country. Within two years the Landmarks Preservation Commission was created and Penn Station was a rallying cry for preservationists nationwide.

The immense granite eagles survive, scattered around the city and in New Jersey. A few other architectural remnants were salvaged by art museums. But, otherwise, one of New York City’s monumental treasures is lost forever.
Posted by Tom Miller at 3:09 AM