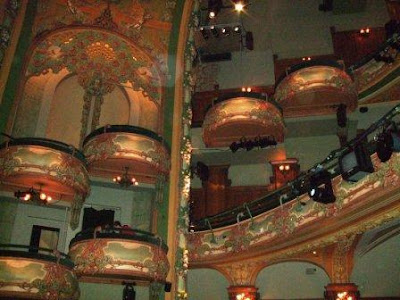 In the first days of the 20th Century New York architects were recreating Roman temples, Renaissance palazzos and Romanesque castles. At the same time Paris turned its back on the past and embraced the innovative Art Nouveau style introduced at the 1900 Paris Exposition. Sinuous Metro station entrances and floral apartment buildings and retail stores seemed to sprout from the pavement like vines.


New York architectural critic Charles De Kay described Art Nouveau design as “…the senseless curves which mar a good deal of the work embraced nowadays under that somewhat misleading title. Nine-tenths of the art nouveau we see in Europe emanates from men and women who mistake haphazard fantasticality for imagination. Their products have neither rhyme nor reason, confuse the mind, and add no real beauty to an object, while often they injure its usefulness. Spindling, swirling supports that do not support anything, grotesque decorations that have no meaning where they are applied, architecture treated like a piece of jewelry merely signify the artisan who seizes on a new movement without understanding it and tries to be in the fashion at any cost.”

When Abraham Erlanger and Marc Klaw chose 42nd Street for a new theatre in 1902 as the entertainment district moved uptown from 23rd Street, they commissioned Herts and Tallant to design it. What the architects produced was like nothing seen before in the country.

﻿ ﻿
The deceptively narrow façade disguised the wide auditorium to the rear extending to 41st Street. The front elevation was a Beaux-Arts explosion splashed with Art Nouveau touches. The ornate sculpted arch over the entrance was a matter of legal bickering for months in 1903.  The arch would project four feet over the building line, a violation of code. The mayor chimed in saying “…if we are to have a beautiful city, we have got to allow ornamentation beyond the building line…Now, limit the style of ornamentation, and the extent to which it may project, and, instead of a beautiful city we will have a city as ugly as can be imagined.”

Eventually the mayor and the theatre owners got their way and the installation of the remarkable arch proceeded. Sculptor George Gray Barnard perched a grouping of Drama, Pierrot, Cupid, a Knight and a Lady, surrounded by wreathed flowers, scrolls and garlands. The arch was supported by columns of yellow marble with bronze capitals.

None of the lavish façade ornamentation, however, could prepare the visitor for visual impact of the interior. Designed by Richard Anderson it was the first example of Art Nouveau in the country. A floral motif in “silvery green,” mauve, lilac, pink, red and gold bombarded the theater goer with slinky ornamentation. Charles De Kay, who had held low esteem for Art Nouveau, praised the design. “To enter here is to get a horror of the red plush effects that still linger at the opera and in many a theatre,” he said. “The line of the proscenium arch is accompanied by a chain of conventionalized peacocks modeled in relief by St. John Issing, a decorative motif repeated in the ceiling and elsewhere.”


Herts and Tallant used an innovative cantilever construction that allowed the balconies to hang over the main floor with no visible means of support – giving unobstructed views from all seats in the house. 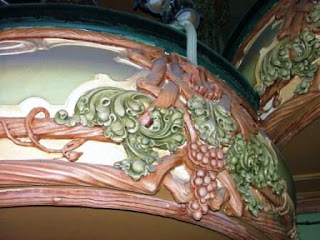 The pod-like boxes on either side of the stage, also designed by Issing, were each given a separate flower motif such as lily, buttercup, violet, and goldenrod. In the lobby, beneath an art glass dome, was a fireplace of Irish marble and Caen stone, two murals by George Peixotto of “Inspiration” and “Creation,” marble wall fountains with brilliant mosaics, and bronze busts of dramatists.

The men’s lounge, “The Amsterdam Room,” was decorated with a continuous mural by Edward Simmons, George Peixotto and R. W. Finn depicting the history of New York. Masculine oak and leather furniture rested on a terra-cotta tiled floor. The ladies’ lounge was outfitted in satinwood furniture under a ceiling fresco depicting classical figures. 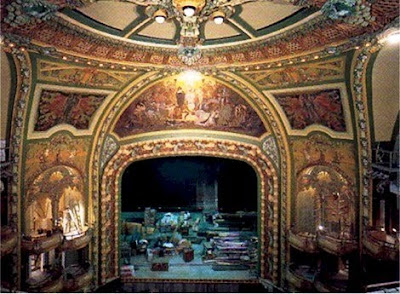 De Kay admitted, “…one cannot refrain from praise to the firm, Messrs Klaw & Erlanger, that sought for our sculptors and painters, our terra cotta workers and carvers, our tapestry makers and embroiderers, mosaicists and modelers, in order to perfect a theatre by the hands of American artists. They have set an example which will be followed. And for having set it so well they deserve the thanks of the community.”

James Traub in his “The Devil’s Playground: A Century of Pleasure and Profit in Times Square” said “The sinuous line and stripped-down ornamentation of art nouveau was the very look of modernity for the forward-thinking aesthetes of the early years of the century, and the New Amsterdam was considered a building of the first importance—a building that might well 'mark an epoch in the history of art,' as one penetrating if breathless account put it. This was also, of course, an era of opulence and show, and the New Amsterdam was intended to dazzle even the most blasé theater-goer." 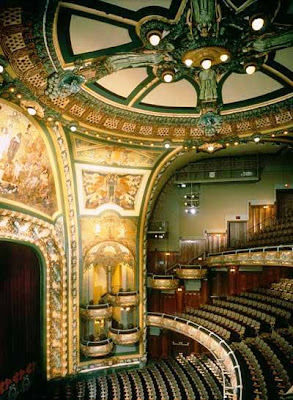 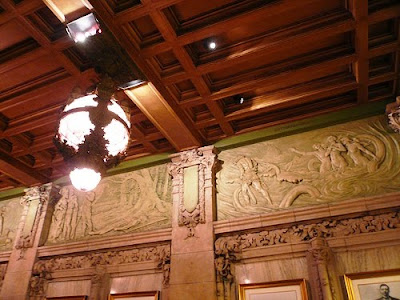 An architecture critic present on opening night called it “the most airy, fairy beautiful thing in the way of a playhouse that the New York public has ever seen.”  On the roof a second, enclosed theatre offered entertainment in the summer months.

The road ahead for the theater would not always be smooth. 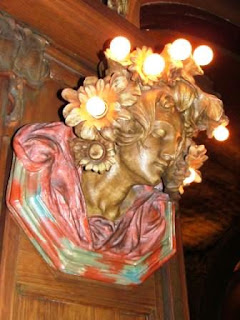 A complaint by the Health Board nearly closed the theatre on March 21, 1907, when police stopped ticket sales. Curtains that had been hung over the exit doors as decoration were deemed a fire hazard by the Board. Joseph Brooks, one of the owners, called the action “uncalled for.” “They closed us up tight and turned away hundreds of persons…There’s not the slightest doubt that there’s something back of the whole thing, but I don’t know what it is.” Whatever “it” was, the theatre was back in operation a day later after removing the curtains.
In 1908 The New Amsterdam was enjoying a smash hit with The Merry Widow. To celebrate the 275th performance, the management announced it would give away “Merry Widow hats” as souvenirs to all the women in orchestra and balcony seats during the matinee. Between the second and third acts, however, the women rioted when a rumor broke out that hats were being given away early.


“There was a small stampede,” reported The New York Times, “a mere hint of what was to follow…One woman, jammed tight against the one table that still stood in place, tackled the woman next to her with a vim that would have done credit to the world’s champion female wrestler. Then the battle was on in earnest. The older women did themselves credit. The remarks which some of them exchanged and the ardor with which they threw themselves into the melee made their daughters look like the veriest molly-coddles.”

The skirmish lasted for about thirty minutes. “At 5:30 o’clock,” said The Times, “only the debris and the memory of the struggle remained.”

The worst problem came in 1930 when the play “Vanities” was raided by police and nine of the cast members were arrested for “giving an indecent performance.” The theatre was reopened when the scene that the police censors found objectionable was removed.


Between the hat riot and the police raid, Florenz Ziegfeld moved his famous Follies from the Moulin Rouge. The Follies presented an annual review at The New Amsterdam until 1927 when Ziegfeld opened his own Ziegfeld Theatre. Through the Follies The New Amsterdam hosted stars like Bert Williams, Fanny Brice, Will Rogers, W. C. Fields, Eddie Cantor and Marion Davies.
The Great Depression hit the theatre district hard. At the beginning of 1931, Variety reported that 31 theatres had closed. The rooftop theatre became NBC Times Square Studio, a radio studio and feature film studio.

Despite its valiant struggles, the theatre was unable to keep afloat. On May 7, 1936 the Dry Dock Savings Institution foreclosed citing $1.6 million inpaid interest and taxes. Max Cohen purchased The New Amsterdam for $500,000 to convert the theatre to a movie house.  The elaborate Beaux Arts entrance arch was stripped off to accomodate a sleek Art Deco neon sign.  The movie theatre opened in 1937 ironically screening A Midsummer Night’s Dream.

The rooftop theatre became the NBC Times Square Television Theatre in 1951; but as 42nd Street degraded, so did the New Amsterdam. In the early 1980s the once-magnificent theatre was boarded shut. Although the Nederlanders bought the building for $5 million in 1982, a string of problems prevented its renovation. The theatre sat abandoned for a decade while its lavish interiors deteriorated. 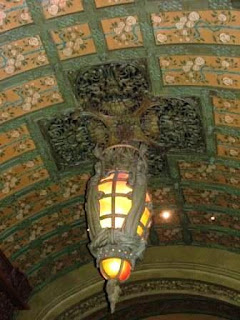 Finally New York City and State pushed for the resurrection of the 42nd Street Theatre District. The 42nd Street Development Project took over the building in 1992 for $247,000. The architectural firm of Hardy Holzman Pfeiffer, known for rejuvenating historic properties, was hired to stabilize the theatre. Water was pumped from the basement, the spread of mold and loss of decorative plasterwork was halted, and the building was ridded of vermin and vagrants.

In 1995 the Walt Disney Company formed the New Amsterdam Development Corporation to renovate the building as a live theatre venue once again, using partial financing from tax incentives offered by the National Park Service. The renovation, lasting a year and a half, cost $36 million.

The New Amsterdam officially reopened as a live theatre on April 2, 1997 with a concert staging of King David, followed later that year by the long-running stage version of The Lion King.

Today the sumptuous façade of The New Amsterdam is gone. However, to enter the theatre is to step back to 1903. The sinuous, entwining designs are fresh and renewed. One of the greatest Art Nouveau interiors in the country -- and a true rarity in New York City -- has been salvaged from nearly inevitable destruction.
Posted by Tom Miller at 2:49 AM